Michelle O’Neill is set to wrestle 15-year stranglehold of the first minister position from the DUP. 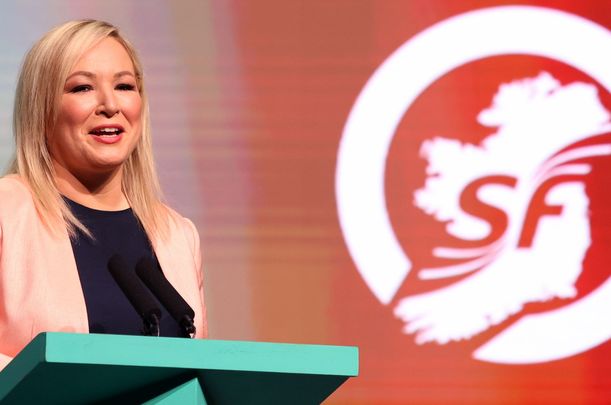 Just one month before Northern Ireland’s Assembly Election on May 5, the latest poll has Sinn Fein remaining on course to be the largest party at Stormont, putting it at almost seven points ahead of the Democratic Unionist Party (DUP).

Sinn Fein’s Michelle O’Neill is set to wrest the 15-year stranglehold of the first minister position from the DUP, a trying test for Sir Jeffrey Donaldson’s party.

The Irish News, which published the poll this week, raised the political question whether Donaldson’s DUP will be prepared to accept the symbolism that will point to a deeper shift within the North’s society.

At the Monday launch of his party’s election campaign, Donaldson said the conditions did not exist for the DUP to re-enter the Executive if the controversial Northern Ireland Protocol remained unchanged.  He also wouldn’t be drawn on whether he would serve as deputy first minister to a Sinn Fein first minister.

The opinion poll published on Monday showed that since a corresponding survey in February Sinn Fein widened the gap on its nearest rival, standing on 27 percent of first preference votes.  Close to seven points now separates it and the DUP.

Based on the findings of the survey, which was carried out between March 11 and 26, Sinn Féin would be close to maintaining the 27.9 percent share of the popular vote it received in 2017.

The DUP clawed back some ground since February, increasing its share by 0.8 points to 20.2 percent.

However, the figures confirm the findings of other recent polls which suggest Donaldson's party will be surrendering the first minister’s post in a month’s time.

Alliance remains on target to be the assembly’s third largest party. Although it dropped one point, it is forecast to take a 14.6 percent of the popular vote.

Elsewhere in the survey, Alliance is shown to be by far the most transfer-friendly of Stormont’s parties. Under the proportional representation system, that’s likely to boost its overall seat quota.

Support for the Ulster Unionists has dropped by half a point since February's poll, leaving Doug Beattie’s party with a 13.5 percent share, a marginal increase on its 2017 performance.

Support for first preference votes for the SDLP stands at 10.3 percent compared to its 11.9 percent showing in the 2017 assembly election.  The number of those undecided on who to vote for still remains significant at 17.2 percent.

Institute of Irish Studies director Professor Peter Shirlow said that while support for the DUP had lifted “slightly,” it looked very much like Sinn Fein would be Stormont's largest party.

Although the Northern Ireland Protocol, the sector in the Brexit deal that effectively maintains a soft border between the two parts of Ireland and replaces it with a trade border in the Irish Sea, is a likely election issue among unionists, the poll showed it won’t be the most important item.

The proportion of unionists concerned about an Irish Sea border rose to 20.09 percent from 11.7 percent in a similar poll seven weeks ago. But they regard health (25.5 percent) and the economy (29.8 percent) as greater priorities.

Only 2.1 per cent of nationalist respondents cited the Protocol as their chief concern. They too believe health (33 percent) and the economy (30.2 percent) are more important.