“We are in the end days of partition," says Sinn Féin's Mary Lou McDonald. 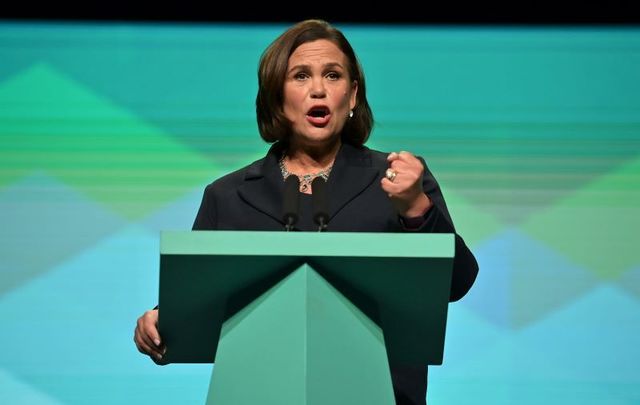 Sinn Féin leader Mary Lou McDonald was in the U.S. last week.  She had a major message on Irish unity to convey.

In the New York St Patrick’s Day parade in 2019, Sinn Féin leader Mary Lou McDonald was photographed with a large banner that read “England Get out of  Ireland."

Of course, there was withering criticism from major media in Ireland and a general tut-tutting about this uncouth Sinn Féin leader.

But it struck home where it mattered most, with thousands of Irish Americans who have no problem at all with the sentiments expressed. Indeed, one could argue two years later that England getting out of Ireland is closer than ever before.

Speaking to IrishCentral in Bobby Van's, a midtown restaurant, on Friday last, Mary Lou McDonald made clear that ending partition was top of her agenda. “We are in the end days of partition,” she said firmly.

It is easy to see why she could utter such a statement. The British have made it clear through ramming home Brexit - despite Northern Ireland voting against- that it is only London’s concerns that matter. Any unionist who can’t see that is delusional.

They also know that the nationalist population is set to be larger than the unionists within ten years or so, and so one has the feeling of a mighty but yet invisible train hurtling down the tracks with many pettifogging politicians uttering ‘‘what train’”? as if it wasn’t obvious.

McDonald is the first to say that the outbreak of English nationalism over Brexit has helped the focus to swing to a united Ireland. But she believes the Irish government needs to do more. 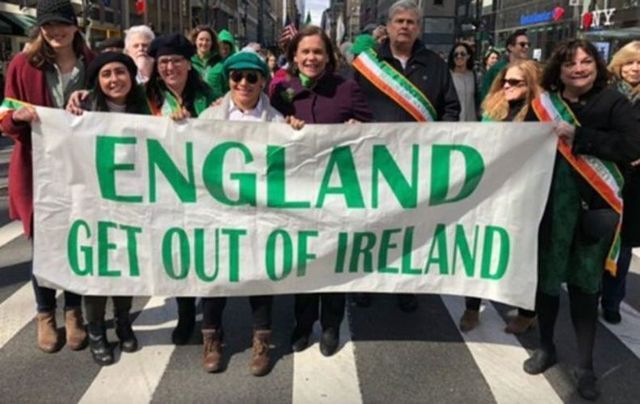 “The onus is on the Irish government to take the lead in preparations. The government in Dublin, particularly the Taoiseach must move from bystanders to persuaders for unity.”

She considers Irish America more vital than ever to the project.

Irish America with Bill Clinton and George Mitchell to the fore, were a huge part of that breakthrough of the 1998 Good Friday Agreement and since then Sinn Féin has come to rely on an energized and buoyant Irish America for support both financially and politically.

It has certainly come from President Biden, powerful Chairman of the Ways and Means Committee Richie Neal, Congressman Brendan Boyle, and others. Meanwhile, McDonald’s wish is that the grassroots Irish Americans need to get even more involved.

It is a tight-knit relationship these days. As Ciarán Quinn, head of North America for Sinn Féin noted on this American trip: “It felt more like a homecoming given the support and well wishes we received from political and community leaders...Their interest in Ireland goes beyond a political concern. There is a bond of kinship spanning generations. “

Mary Lou McDonald has mastered a tricky task. Gerry Adams and Martin McGuinness were always going to be a very difficult act to follow, and when Sinn Féin opted for two women, Mary Lou in the Irish Republic and Michelle O’Neill in the North where she served as Deputy First Minister, there were some mutterings of tokenism.

Neither woman had an army background as Sinn Féin calls  IRA service.  Both were of a generation that came of age rather than actively participated in The Troubles. It was a complete generational shift that could easily have come unstuck, but it didn’t.

Indeed, McDonald, who fought off a very serious encounter with long COVID that took a year to recover from, has thrived in the rough and tumble of Irish politics. In the north, Sinn Féin are quite likely to be the largest party in Stormont after the next election in May.

In the south too, the party is thriving. If you need proof just look at the opinion polls for party leaders in the South. In September, the Red C poll, the most trusted by opinion formers, had Sinn Féin galloping ahead by ten points and leading the pack for the first time since Red C was founded in 2003. McDonald was the most popular leader at 48 percent approval in a five-way race, a major achievement.

There are those who will argue that Sinn Féin is benefitting from being in opposition during a terrible time of COVID, a massive housing crisis, and discontent all around.

There is truth in that. But there is something else at work, a not so quiet revolution in Irish politics, with Sinn Féin poised at the moment to form a government after the next election expected in the next two to three years.

History is very much on McDonald’s mind. "We are on the threshold of writing the next chapter of Irish history. We need to begin preparations now for the reunification of Ireland. The opportunities for our people are immense. This is a moment of great optimism and excitement."

It certainly is and Mary Lou McDonald will be in the thick of it.