Sinn Féin President Mary Lou McDonald addressed the issue of partition on the island of Ireland while in the US this week. 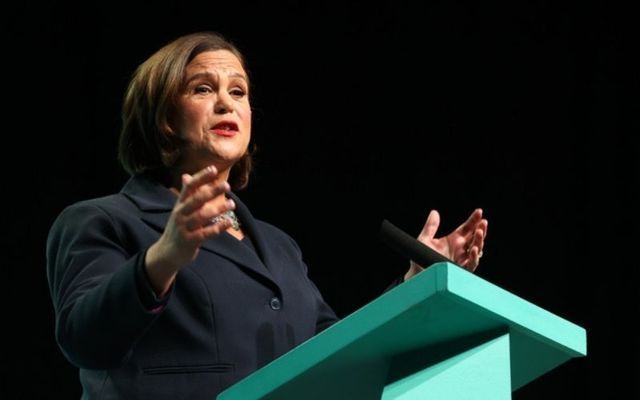 Sinn Féin President Mary Lou McDonald has told an audience in the United States that there will be a vote on Irish unity within the next ten years, adding that partition is in its "dying days".

McDonald addressed the New York Bar Association on Thursday about Brexit and said that the Irish Government must begin planning for a united Ireland over the next decade, including how healthcare, housing, and economic policy would look like.

McDonald added that the Irish Government must "must move from being bystanders to persuaders for unity".

Many thanks for the warm welcome at the New York Bar Association @NYCBarAssn We are living through the last phase of partition. We need to plan and prepare for reunification. pic.twitter.com/sAAbrtP11F

McDonald said that the Good Friday Agreement "was never the final destination" for Northern Irish history and said that it would provide a peaceful pathway to Irish unification.

"The Good Friday Agreement was never the endpoint, it was never a final constitutional settlement. It is a framework, a set of rules for managing political differences today and tomorrow," McDonald said on Thursday.

"It asserts the primacy of politics over conflict. The rights of all over the interests of the few. That is why agreements made must be delivered. Anything less undermines the political process."

She said that the US would play an important role in future discussions on a united Ireland and ensuring that the Good Friday Agreement continues to be protected.

"When Washington talks, Westminster listens. President  Biden made this crystal clear when he issued a formal diplomatic rebuke to Britain for failing to honor their agreement," she told the New York Bar Association.

The Sinn Féin President received two standing ovations during her presentation on Thursday and said that she supports the introduction of an Irish Language Act in Northern Ireland.

She additionally said that she strongly opposes a move by the British Government to introduce amnesty in Troubles-era cases in Northern Ireland.

McDonald also addressed Britain's vote to leave the European Union in 2016, which she described as "a product of narrow English nationalism and a hankering for the days of Empire".

"Britain has lost its empire and Ireland, our peace agreements and prosperity are under threat because the current British government still fails to acknowledge that fundamental fact."

She added that the Conservative Government had dragged Northern Ireland out of the EU against the will of the majority of people.

She said that Sinn Féin MPs would have had insufficient numbers to stop Brexit, even if they dropped the policy of abstention.