The new Irish Arts Center in New York City "represents the reality that we Irish will continue to be around whether through bright or dark horizons." 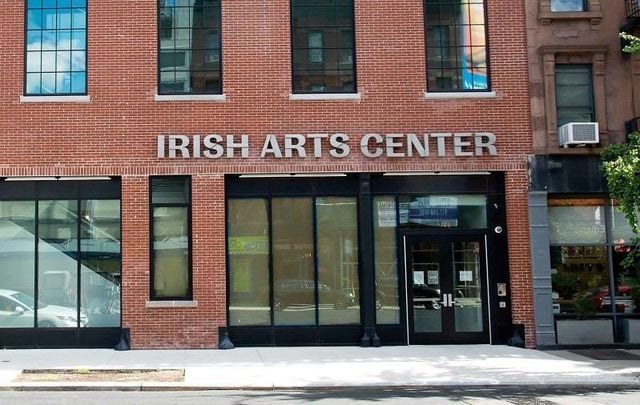 On the far West Side of Manhattan, not far from the Hudson River where the emigrant boats docked during Famine times, the best Irish news story in a very long time is about to occur.

The new Irish Arts Center is a magnificent building that I saw in its entirety for the first time last week. It is located at 726 11th Avenue at West 51st Street and is set to become an oasis of Irish culture in the most important city in the world.

The $60 million project started out as a dream by, among others, then-Congressman Joe Crowley and then-City Council President Christine Quinn, who ensured back in 2006 that the level and scale of ambition would be the most ambitious project ever undertaken in the Irish community.

There is an old Irish Arts Center on West 51st Street, beloved in the way a shabby but homely theater that showed guts and vision just to survive can be recognized.

Some extraordinary talents emerged from the old building which will eventually get its own makeover. Award-winning filmmakers like Jim Sheridan (My Left Foot) and Terry George (In the Name of the Father, Hotel Rwanda) cut their theatrical teeth there. Major Hollywood players like Liam Neeson and Gabriel Byrne became stalwart promoters and constantly drove the notion of a new Irish theater community forward.

Irish theater and art is incredibly well served by the Irish Arts Center and the Irish Repertory Theatre, also Manhattan-based, that regularly showcases new playwrights and productions as well as breathing life into beloved works.

The new Irish Arts Center is so necessary in an era where Ireland’s Great Hunger Museum in Connecticut has been shuttered, and the American Irish Historical Society on Fifth Avenue faces grave questions about its management and future.

It is a godsend for those who consider Irish arts, culture, and literature to be the very heart of any Irish community.

The price tag isn’t cheap with $60 million already raised, an astonishing sum, thanks to funding from New York City and State and an incredibly high-profile board which has not been found wanting in its endeavors to make the dream happen.

The Irish government also contributed millions, making clear that it supports the vision and drive behind the concept of a new culture capital in New York.

I would be remiss not to mention one of the chief architects, literally, Pat Donaghy, a proud son of Co Tyrone, and his massive construction firm Structure Tone, whose subsidiary Pavarini McGovern built the magnificent physical structure which at four stories high and 21,700 square feet is transformative from the moment you step inside.

Last but certainly not least on the funding and vision front, Irish Arts Center Executive Director Aidan Connolly and Vice Chair Pauline Turley have simply been stalwarts from start to finish.

Guardians of the project, they have done Trojan work on a day-to-day basis making the new Irish Arts Center a reality through thick and thin, through pandemic and Wall Street slumps. They forged ahead and ignored the begrudgers of which, being Irish of course, there were many.

The outside of the building is set in red brick, much of it restored from old tenants Cybert Tire, with a wide, sweeping hall entrance that beckons the visitor inside where a stunning interior awaits.

It’s important to note that the center will also be a venue for every kind of Irish activity. There are catering facilities, rooms for Irish language and dance classes, and other pursuits.

The centerpiece is the theater itself, literally with the ability to reshape the stage and move the audience around seamlessly in a manner that marks true innovation.

I could go on about the state-of-the-art building, but what I really suggest is that when it officially opens after December 8, find your way there for a production or even just to witness what has been created.

Despite the attempts to downplay Irish culture and history such as the closing of the Great Hunger Museum, the Irish Arts Center is a definitive riposte and statement of intent by everyone concerned.

The building represents the reality that we Irish will continue to be around whether through bright or dark horizons. The scale of the ambition has produced the most important Irish building and artistic venture in America in a lifetime.

It is wonderful to note that there will be an Irish home from home on 11th Avenue forever and a day and that Irish culture is thriving. Go see for yourself.

You can learn more about the Irish Arts Center on its website.

The New Irish Arts Center: The Space Between