Joe Biden, with an assist from Seamus Heaney, crushes it with his acceptance speech

Republicans will need a new script as Biden shows that, far from being senile, he is ready for a major battle against President Trump. 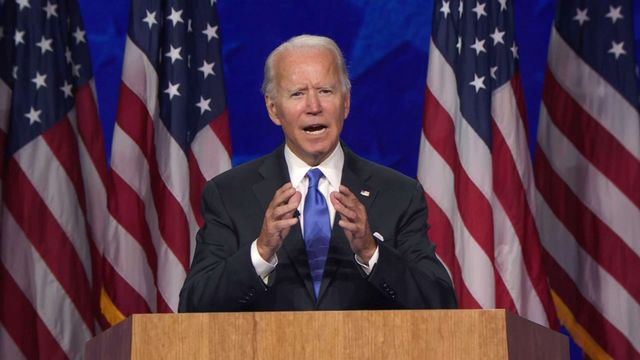 Joe Biden is officially running for the 2020 elections at the Democrats Presidential candidate. YouTube / CSPAN

In a beautifully crafted speech, Joe Biden proved last night he was more than ready to be President and he quoted Seamus Heaney to close the deal.

Hope over fear, fact over fiction, truth over lies is Joe Biden’s promise.

Biden also set up the November election as a contest between a good man and an evil man who currently occupies the White House and who is ready to destroy democracy if it means he can stay in power. As Biden said, “Democracy is on the ballot in November.”

As Barack Obama and Biden framed it, no American presidential election, since 1864, when the union depended on Abraham Lincoln’s re-election, has had such incredible importance.

As the arrest of Steve Bannon proved yesterday the corruption surrounding the  White House among Donald Trump’s charmed circle is massive. We have the most immoral gang of characters in power who have more in common with a banana republic than the world’s greatest democracy.

As for the impact of the speech, Republicans will have to rewrite their script that Biden is a bumbling old man hiding in his basement in Delaware. The Biden at the podium last night was energized, empathetic, and ready to run. Like an old warhorse, he has heard the war trumpets and is ready to ride into battle.

It was revelatory that Biden dated his desire to run to Charlottesville three years ago when a proxy Ku Klux Klan marched through the city chanting anti-Semitic tropes and clashing with local protestors.

Incredibly, President Trump responded to the White Power parade by saying there were "very fine people" on both sides. Biden knew at that moment how much trouble America was in and the heart of darkness that resided in the White House.

Joe Biden could not stand aside.

Biden said Irish poet Seamus Heaney's lines that “once in a lifetime, The longed for tidal wave of justice can rise up and hope and history rhyme" was a metaphor for what was happening in America today and the opportunity to turn its darkest moment into its greatest.

Heaney wrote those lines because of the extraordinary events that led to the end of the Irish Troubles but Biden is correct that it could also describe America’s opportunity during its darkest days.

For those used to hearing Biden speeches, they often take too long, wander off in different directions, and can be an endurance test for an audience.

Not last night. Biden was crisp and cool, focused and forceful, determined, and direct. His words on the pandemic were clear. Nothing can be accomplished with the economy or school attendance until COVID-19 is dealt with.

Americans must have felt such a huge sense of relief that a political leader had sent the only realistic message in the midst of a pandemic, deal with the virus and all else became possible.

Strange as it may sound, America needed that dash of cold water, the unvarnished truth, not Donald Trump’s daily diet of lies and magical cures.

Above all, Joe Biden showed how keen he was for the coming fight. Given his performance last night he certainly has reason to be optimistic he will occupy the White House on Wednesday, January 20th, 2021. Bring on the debates.

If you're eligible to vote in this year's US election have you decided who you're voting for? Let us know in the comments section below.

Read more: Kamala Harris’ sister is viewed by some as the next Bobby Kennedy