Caroline Kennedy and her son Jack Schlossberg filmed a video in support of Joe Biden for the virtual 2020 Democratic National Convention. 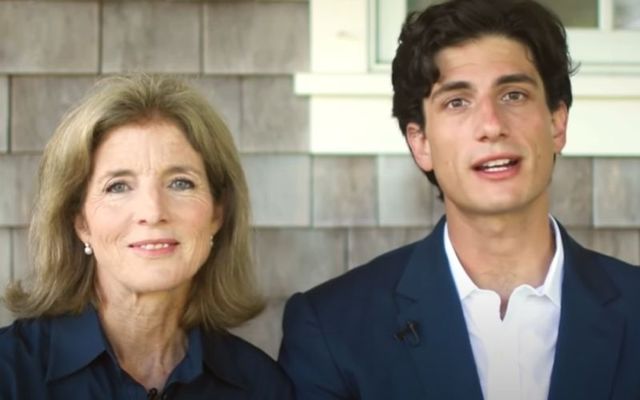 Caroline Kennedy and her son Jack Schlossberg filmed a video in support of Joe Biden for the 2020 Democratic National Convention. PBS, YouTube

Caroline Kennedy and Jack Schlossberg liken Joe Biden to John F. Kennedy in a video that appeared during the 2020 Democratic National Convention.

Caroline Kennedy, the daughter of the late President John F. Kennedy, and her son Jack Schlossberg, JFK's only grandson, appeared during the second night of the Democratic National Convention on August 18 in support of Joe Biden.

Opening the video sitting beside her son Jack Schlossberg, Caroline Kennedy said: “Sixty years ago in a crowded LA stadium, my father accepted the Democratic nomination for president.

“He challenged Americans to look to the future and join him on a journey toward a new frontier.”

Jack says: “It was a call to the young at heart, regardless of age or party. Times have changed, but the themes of my grandfather’s speech - courage, unity, and patriotism - are as important today as they were in 1960.

“Once again, we need a leader who believes America’s best days are yet to come. We need Joe Biden.”

Caroline says: “I’ve admired Joe Biden since I was a Senate intern in 1974. He shared my Uncle Teddy’s commitment to civil rights, women’s rights, and working families. He was a Senator who cared, who led, who inspired. That’s why I helped choose him to be Barack Obama’s running mate in 2008.”

Caroline goes on to say that while she served as the Ambassador to Japan, she witnessed first hand “a leader who was tough, but fair, who commanded the trust and respect of other nations, and who always put America’s interests first.”

“Joe Biden’s lifetime of public service reflects his unwavering commitment to our highest ideals,” she added.

Jack says: “In this election, our future is on the ballot. For my generation, it will define the rest of our lives. We need to tackle climate change, we need to end systemic racial injustice, we need to make healthcare available for everybody, and we need to rebuild an economy that helps working families.

“We can do this, we can reach these new frontiers, but only with a president who asks what he can do for our country, and what together we can do to build a better world. It’s up to us, let’s get it done.”

“Let’s elect Joe Biden the next President of the United States!”

You can watch Caroline Kennedy and Jack Schlossberg's video from the second night of the 2020 Democratic National Convention here: