In his new book "The Glory and the Burden: The American Presidency from the New Deal to the Present," Robert Schmuhl casts a cold eye on the American political system and reveals some stunning insights. 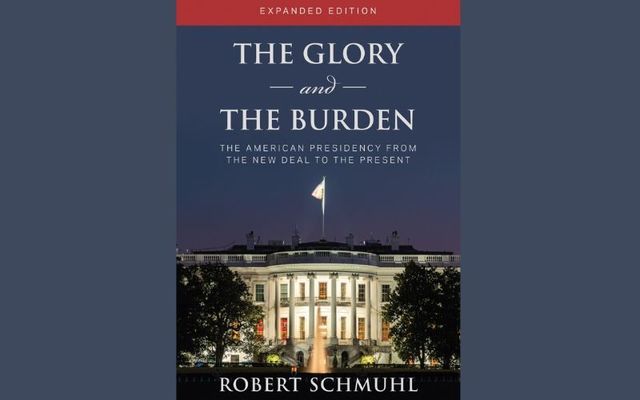 "The Glory and the Burden - The American Presidency from the New Deal to the Present, Expanded Edition" by Robert Schmuhl. Notre Dame Press

As befitting a presidential scholar, the occupants of that sacred space, the White House, are thoroughly examined and new scenarios emerge. For instance, what would have happened if the 22nd Amendment to the Constitution forbidding more than two presidential terms had not been passed?

In "The Glory and the Burden: The American Presidency from the New Deal to the Present," Schmuhl points out the strange symmetry that occupants of the White House shared. For the first 33 years of the 20th century, Republicans won the White House six times (McKinley, Teddy Roosevelt, Taft, Harding, Coolidge, and Hoover), and the Democrats just once when Woodrow Wilson triumphed.

The order was neatly reversed from 1933 to 1969 when four Democrats won the White House (FDR, Truman, Kennedy, Johnson) and just one Republican, Dwight Eisenhower.

In the modern era, there has been far more churn from Democrat to Republican president. Since 1977 when Jimmy Carter won the White House, there have been four Democratic presidents and four Republicans, a dramatic shift from the first two-thirds of the century where one side or the other dominated.

In his insightful and learned look at the presidency, Schmuhl, a Notre Dame professor emeritus in American studies and author of "Ireland’s Exiled Children," provides some fascinating insights into why the pattern came about and the importance of the 22nd Amendment which bars a president from running for more than two terms, put in place by a disgruntled Republican Congress who wanted badly to see the back of FDR.

Schmuhl’s interest was sparked early on by a guided tour of the Truman presidential suite during a boyhood visit to a Kansas hotel, then further kindled academically at the onset of Watergate when working as an academic he found his students engrossed in the burgeoning scandal.

He paints a straightforward picture of the Trump presidency, pointing out that the business mogul is the first president to have neither a political nor military background before he attained office.

Schmuhl presents the facts not in a biased way against Trump, but in the context of a historical assessment of how deeply unusual it was for the electorate to choose such a candidate. He says history and the longevity of Trumpism will be the judge.

As to which of the two-term presidents would have gone for a third term and likely succeeded, you have to rule out Ronald Reagan who had Alzheimer’s.

Strangely, the two-term president who was young enough and popular enough was Bill Clinton, who left office with a 60.6 percent favorability rating. Dwight Eisenhower had a 60.5 rating but had major heart trouble symptoms. Barack Obama, by contrast, was in the 47 percent category while George W. Bush was at 36.5 percent.

Clinton was just 55 years old when he left office after his second term, and a third term was definitely in his grasp but for the 22nd Amendment.

Schmuhl also traces the decline of civility in American politics to the notion of trust in what the government is doing.

Consider this: in 1964, the percentage of Americans who trusted the government was 77 percent. In a 2017 poll, the number was just 18 percent.

Essentially that complete lack of trust was because of issues like Watergate and Vietnam and, in the modern day, the demonization of anything to do with government from the right-wing side.

Schmuhl’s book is full of fresh insight and perceptive observations. It is a must-read for all followers of politics this election season.

"The Glory and the Burden: The American Presidency from the New Deal to the Present" is available from Notre Dame Press.