Bobby Sands’ election was the beginning of the political strategy by Sinn Féin which has brought the party to the cusp of power in Ireland north and south. 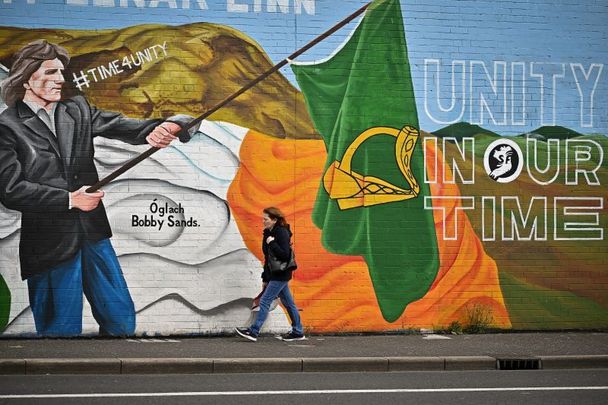 May 4, 2022: A Sinn Féin mural, featuring Bobby Sands, on the Falls Road in Belfast the day before Northern Ireland heads to the polls for its Assembly elections. For the first time in Northern Ireland's 100-year existence, Unionists could see nationalist party Sinn Féin becoming the largest party. Getty Images

On May 5, 1981, Bobby Sands died on hunger strike in protest against British rule in the Maze prison.  He had fasted for 66 days before succumbing.

Prior to his death, he was elected as member of Parliament for the constituency of Fermanagh/South Tyrone. He was the youngest member of the British Parliament but would die within a month of winning the office.

On May 5 of this week, 41 years to the day that Sands died, Sinn Féin look set to begin a new direction as profound as the one that the death of Sands led them on.

The 2022 Northern Ireland Assembly elections may very well end up with a Sinn Féin first minister elected, a powerful development, one of the most important days in Ireland since Sands died.

The polls show the party ahead and Michelle O'Neill as likely to be the first-ever Sinn Féin First Minister, but polls in Northern Ireland are extremely tricky and it would be no surprise if ostensibly feuding unionist parties decided at the last moment to band together to keep Sinn Féin out.

If they fail and Sinn Féin takes over, it will be the beginning of a new journey as profound a one as the death of Sands presaged.

Sands’ election was the beginning of the political strategy by Sinn Féin which has brought the party to the cusp of power in Ireland north and south. No one was more important originally to that shift in focus than Bobby Sands.

On May 5, 1981, I was a young journalist in San Francisco witnessing a symbolic coffin being carried through the streets near the British Consulate in San Francisco and laid at the gate of the heavily policed British residence.

It is hard to recall the emotion of those times now, but there was a sense of profound change, of something in the air that was very different.

The IRA war against the British presence had been underway for about 14 years with many dead on both sides, but safe to say Sands’ death was the most impactful of all. I saw the impact that night in faraway San Francisco with thousands marching behind the symbolic coffin. It was a moment shared across the world.

Ironically, Sinn Féin have the Iron Lady to thank for their turn to politics. Margaret Thatcher was resolute that an elected member of her Parliament should be allowed to die on hunger strike rather than conceding his cause was a political one.

I’m sure if she was still around Maggie would be astounded at how well her handiwork worked out – for Sinn Féin.

In her efforts to squash the nascent political movement within Sinn Féin, she instead fired up Irish nationalist sentiment to the stage where a tipping point was reached and Sinn Féin realized that political power was the pathway to victory.

It is also Cinco De Mayo, the celebration of the Mexican victory over the French Empire in their fight for freedom at the Battle of Puebla in 1862, an example of synchronicity if there ever was one. So May 5, 2022 begins part of a new journey for Sinn Féin the same way.