If Sinn Féin holds its lead through the Northern Ireland Assembly elections on May 5, they will be able to nominate the region's First Minister for the first time ever. 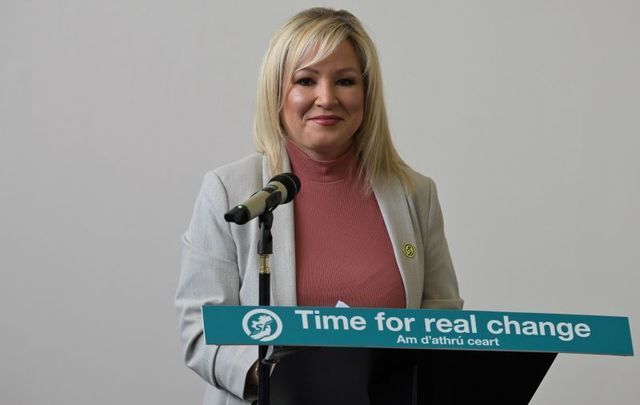 Sinn Féin maintains its lead ahead of the Northern Ireland Assembly according to a LucidTalk poll conducted for Belfast Telegraph.

Twenty-six percent of people polled said they would vote for Sinn Féin as their first preference in the elections which will be held this Thursday, May 5 in the region. This figure remains even from a similar poll in March 2022 and an increase of one percent from a January 2022 poll.

This places Sinn Fein comfortably ahead of the other parties; the nearest is the Democratic Unionist Party (DUP), which gained one point in the latest poll, rising to 20 percent from 19 percent.

The implications of Sinn Féin's lead are historic. If the party continues to hold the lead, they are automatically entitled to nominate the First Minister of Northern Ireland, who would be the northern Sinn Féin party leader Michelle O’Neill from Co Tyrone. It would be the first time a nationalist holds the position.

Elsewhere in the Belfast Telegraph / LucidTalk poll, both Alliance and the Ulster Unionist Party (UUP) received 14 percent of the vote - Alliance down two points and UUP up one point.

The Social Democratic and Labour Party (SDLP) dropped one point to 10 percent.

The Traditional Unionist Voice (TUV) remained even at 9 percent of the vote.

The Green Party jumped point to 3 percent of the vote, while People Before Profit (PBP) remained even at 2 percent.

“Others” received 2 percent of the vote.

Under Northern Ireland's proportional representation voting system, candidates can pick up surplus votes from those elected or eliminated, giving them a shot at winning the final seats in the multi-seat constituencies, Reuters notes.

17 percent of Sinn Féin supporters said in the Belfast Telegraph / LucidTalk poll that they won't give another party a preference.

Belfast Telegraph says its LucidTalk poll was carried out online from 11 am on April 22 to 5 pm on April 24, using the established LucidTalk Northern Ireland (NI) online opinion panel, comprising of 13,816 members, which is balanced to be demographically representative of Northern Ireland.

Some 3,699 full responses were received, and these were then authenticated, audited, and weighted to a NI-representative data set of 1,708 responses which was used for analysis in terms of the final results.

All results are accurate in terms of being Northern Ireland representative to within an error of plus or minus 2.3 percent at 95 percent confidence.