The conservative Supreme Court justices "have completely failed to grasp the scale of the national pushback they are about to experience for grossly defying the nation's settled will." 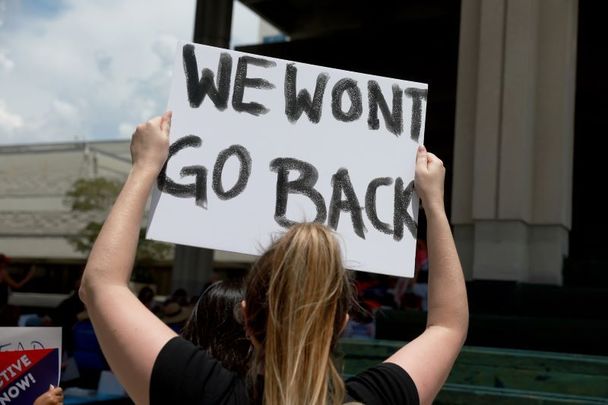 May 7, 2022: Abortion-rights supporters rally in Fort Lauderdale, Florida. A leaked draft opinion by Supreme Court Justice Samuel Alito has suggested that the Court is poised to overturn Roe v. Wade, the landmark 1973 ruling that created a constitutional right to abortion. Getty Images

After millennia of being told what they could and could not do with their own bodies - including their own wombs - women were finally afforded the luxury of deciding for themselves in America in 1973.

But that's all over, if the Supreme Court's Roe v Wade draft ruling is accurate, and it almost certainly is.

The legal right to have a safe, legal abortion will vanish for million of women next month when the Court - with the assistance of the Republican party – overturns, for the first time in American history, a settled right of all women here to make their own reproductive choices, including the right to seek an abortion on demand, as established in Roe v. Wade.

Instead of you deciding for yourself, the nation's courts, churches, and conservative politicians will now decide for you, telling you exactly what you can and can not do with your own body. And you can just shut up.

They will not simply leave you to your own devices about it either. Some states plan to charge you with a felony or even with murder if you try to take your fate and their laws into your own hands by denying you medication and contraception (you will have to be married to avail of that).

If you journey to a neighboring state they will charge you with a felony, too. They will demand to know why you are traveling. They will prosecute and imprison you if they don't like the answer.

The Court and Red State legislators will tell women who have been the victims of incest and rape that their unwanted pregnancy is God's will, and that isn't it a comfort to you to know that you will be contributing to, and I quote here, the “domestic supply of infants,” which means your personal violation is very unfortunate but the state itself benefits.

Why, when only 27 percent of the nation believes it should be overturned are the 27 percent somehow prevailing? How did the minority dictate like this to the majority?

Don't listen to the nonsense about sending the decision back to the states for review. 13 states in the union already have trigger laws in place that will outlaw abortion in every instance the moment the Court rules, and more than half of states could ban abortion if Roe v. Wade is overturned.

I'm not a woman, but as a gay man, I know that if this pillar of protection and privacy falls then they all can. If women are to be denied control of their own bodies, including their reproductive choices, what's to stop the Court from deciding that LGBT marriage rights, having not existed historically, no longer need to exist now too?

There is speculation that after the Court rules on abortion, Governor Greg Abbott of Texas could move to deny marriage certificates to LGBT couples in Texas, setting up a case that will eventually reach the Court, who have already winked to the GOP that they are ready and able to undo these other rights.

So hundreds of thousands of same-sex weddings, including all the legal and financial rights that came with them, will instantly vanish. Your friends and neighbors, your brothers and sisters, and sons and daughters, many of whom were happily wed in your presence, will be unceremoniously unwed by the state. That's all over.

It is exhausting to live in a nation where your rights and legal equality can appear and disappear based on the whim of a few conservative Court justices, but this time they have completely failed to grasp the scale of the national pushback they are about to experience for grossly defying the nation's settled will.

If you don't want to get in the Supreme Court and the GOP's DeLorean time machine for a journey back social conditions of your great grandparents in the 1920s, may I suggest you take to the streets by the tens of thousands this month? Make your voice heard.

The will of the people is as strong as the decisions of five conservative justices. It's time they heard us. We're never going back.