Savita Halappanavar died from sepsis while miscarrying in a Co Galway hospital in October 2012. Her request for an abortion had been denied. Her tragic death spurred major changes to Ireland's abortion laws. 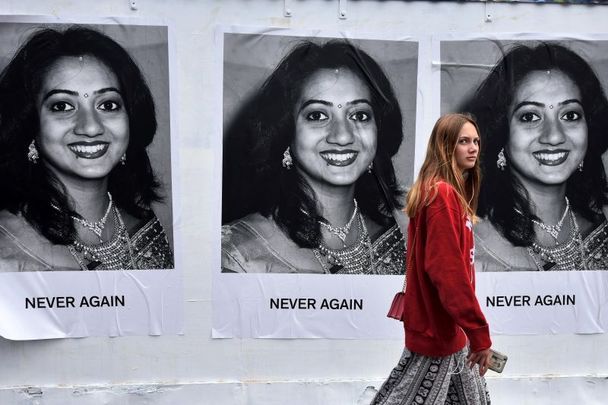 May 26, 2018: A woman walks past artwork featuring Savita Halappanavar which states 'Never Again' as the results in the Irish referendum on the 8th amendment concerning the country's abortion laws takes place at Dublin Castle in Dublin, Ireland. Getty Images

Editor's Note: The following is an excerpt from "A New Ireland" (Skyhorse Publishing) by Niall O'Dowd, founder of IrishCentral.

“This is a Catholic country, we don’t allow abortion.” - Irish midwife to Savita Halappanavar as she lay dying after a pregnancy gone wrong.

Soon after he was elected in 2017, Taoiseach Leo Varadkar made clear he would hold a referendum on the right to abortion for Irish women. Varadkar knew the 8th Amendment to the constitution passed in 1983 which valued the fetus and mother’s life equally had led to tragic outcomes and desperately needed to be addressed. There was also the fact that women were seeking illegal ways around the abortion ban.

He said “women from every county in Ireland are risking their lives” by obtaining abortion tablets through “the post.”

“Abortion is not a black and white issue; it is a grey area” but we can’t continue to “criminalise our sisters and friends,” he said.

But there will be “restrictions,” said Mr. Varadkar of the likely legislation.

Abortion tablets won’t be available “over the counter”.

But he said if the referendum is passed, abortion will “no longer be an article for the constitution.”

The 8th Amendment to the Irish constitution, the one at the heart of the abortion issue, was passed on the 7th of September 1983 by a 67 to 33 percent majority.

It meant in practical terms that a woman had three choices if unwillingly pregnant even by rape or incest: They could illegally import the abortion pill from overseas, travel to Britain for an abortion where it has been legal since 1967, or have the child against her will.

The other option available in 25 of 28 other European Union countries was a termination in your own country by lawful and medically professional means.

The passage of the 1983 referendum seemed to shut the door on the last option forever.

Abortion was already a criminal act in Ireland, but pro-life groups feared, like in the Roe vs Wade decision in the US, that somehow abortion could be legalized through the courts. It was a time when abortion laws in many countries were being liberalized.

The proponents of the 8th Amendment wished to insert a clause into the constitution where the rights of the unborn baby and the pregnant mother were the same. There would be no equivocation on that, threatened suicide or any such condition, would not change the ban against abortion, the only exception was when the life of the mother was in mortal danger. But if that was the case, and there was a fetal heartbeat, it was bound to create an existential question for the doctors concerned. Abort with a heartbeat present and the doctor could risk criminal prosecution.

It was a poorly devised amendment, one bound to lead to massive complications as doctors and legislators tried to define in the referendum language whose life was to be saved in hypothetical critical situations.

Except hypothetical became real in 1991 with The  Miss X case, earlier referred to in this book, which showed how emotional amendments make bad common-sense laws. Miss X, who was 14, was raped by her neighbor and went to England for an abortion. The Attorney General became aware of her case and told her parents they were acting in a criminal manner if they allowed their daughter to abort the baby under the 1983 amendment granting equal rights to the fetus.

The young girl returned home suicidal and lost one ruling before the Irish Supreme Court eventually ruled in her favor. As it turned out, she miscarried.

The Miss Y case in 2014 was equally tragic, a foreign national seeking asylum who was raped and became pregnant in a war zone ended up in Ireland. She tried to go to England for an abortion, but was refused entry, then became suicidal but was eventually forced to have the child who was given up for adoption.

The 1983 amendment was clearly problematic and a later provision allowing abortion in the case of suicidal tendencies clearly did not work as the Miss Y case proved.

It was between the Miss X and Miss Y cases that a catastrophic event occurred that dramatically changed the views of the Irish people on abortion.

It happened to a woman born in the same country as Leo Varadkar’s father and, like the Varadkars, her story had a massive impact on Ireland.

Irish Times journalist Kitty Holland did a deep dive into the case for a superb book on the topic, ”Savita: The Tragedy That Shook a Nation.”

Savita Andanappa Yalagi was born in September 1981 in Bagalkot, a city of 112,000 some 300 miles from its provincial capital of Bangalore in northwest India. She was beloved as the only girl - she had two brothers.

“She was always funny, always smiling, and always the little ruler,” says her mother. “We knew she would be a ruler of the house the moment she was born.”

She was also the precious little sister of her brothers, Santosh and Sanjeev, who were hugely protective of her. “They would do anything she asked.”

Andanappa, her father, traveled widely in his job as an electrical engineer with Karnataka Electricity Board. Her motherAkhmedevi remembers her as “very fond of dancing.”

The family moved to Belgaum city, 120 miles or so away where Savita’s father had gotten a better job, and she proved to be a brilliant student in the local school.

Her mother remembers: “She loved science and wanted to be a dentist.”

After graduating in dentistry in 2004, Savita did a year’s internship with a dentist in Belgaum and would have stayed in the city but for meeting her future husband Praveen Halappanavar, who she met through a matrimonial website as many Indians do.

“With the girls, they marry and they accompany their husbands, so that is why she went to Ireland. If she had not there would be no problem. She would have worked easily in Belgaum,” says her father.

Praveen had been in Galway for two years working at the Boston Scientific plant, which makes medical devices.

They decided to get married during a meeting in April 2008, and the wedding was arranged there and then. “She was so happy that day,” says her father, smiling. 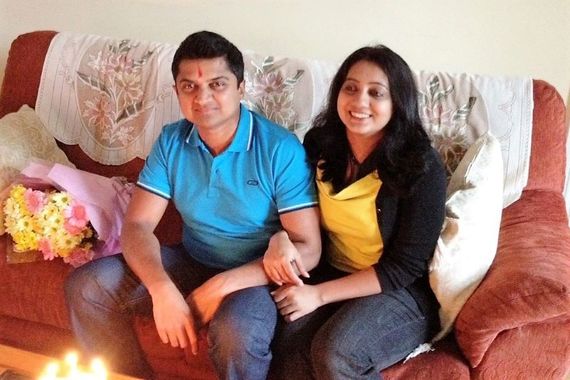 They arrived in Ireland in 2008 to a rental apartment and later a house and settled into a vibrant ex-pat Indian social scene. Savita visited dental clinics “to observe” in preparation for her exams.

Savita passed her Irish board exams and registered on July 11th, 2012. She was a fully-fledged dentist in Ireland.

That same month she found out she was pregnant. That October, her first gynecological exam showed no complications The baby was due on March 30th, 2013. She decided to wait to start practicing until after the baby was born.

“She was so happy.” Her parents visited and remembered. “She loved Ireland and the peace there. She was happy.”

They were celebrating with an early baby shower because their parents were there visiting when Sveta felt the same sharp pain in her pelvis she had been feeling but it was getting worse. Up to that point, her parents remembered, “Savita was on top of the world. We were so excited, all talking about the baby.”

That night she couldn’t sleep. The pain she had had in her lower back for the past few months was worse than usual, and radiating around her pelvis. At about 9 am, Praveen phoned the maternity ward at University Hospital Galway.

“I spoke to a midwife and explained what was happening, and she said to come on in. So we told her parents we were going to the hospital.”

On Sunday 21 October 2012 at 9:35 am, Savita and her husband Praveen attended the gynecology ward at University Hospital Galway without an appointment. She presented with sharp back pain.

She was assured it was just back pain and told to come back if it got worse.

It did, and she returned later that day after she felt “something coming down” in her stomach. She was in great pain.

The midwife believed she was miscarrying and doctors agreed.

Journal.ie reported that “even with the partial miscarriage, there was still a fetal heartbeat and under Irish law, the doctors claimed  they could nothing given the equal life amendment to the constitution passed in 1983.”

Of course, with the fetus nonviable at that stage, it was a ridiculous assessment.

A midwife told her as she struggled in pain she couldn’t have an abortion as “This is a Catholic country.”

As Holland reports, “Just after midnight on Monday, 22 October, Savita began vomiting violently and had a spontaneous rupture of membranes – that is that the bag of membranes around the foetus had burst and the fluid had leaked out.

"By 8:20 am, she was experiencing bleeding but her pain had eased. At this time, the consultant discussed the risk of infection and sepsis with her, explaining the need to continuously check for a fetal heartbeat.”

At the same time the following day – Tuesday, 23 October – Savita and Praveen asked about using medication to induce the inevitable miscarriage. They did not want a protracted waiting time when the outcome was inevitable.

The doctor kept telling her as long as there was a heartbeat they could not perform an abortion.

For three days they refused her request. Eventually, she contracted sepsis and plunged into a death spiral.

Her husband remembered a nurse running to him and asked could he be with Savita as she was dying.

“The nurse came running. She just told me to be brave and she took me near Savita and said, 'Will you be OK to be there during her last few minutes?' I said yes.

“It was all in their hands and they just let her go. How can you let a young woman go to save a baby who will die anyway? Savita could have had more babies.

“What is the use in being angry? I've lost her. I am talking about this because it shouldn't happen to anyone else. It has been very hard to understand how this can happen in the 21st century.”

The story was reported across the world and became a sensation. One headline stood out. On 16 November, the main story on the India Times website was   “Ireland Murders Pregnant Indian Dentist.”

It was clear that the newspaper had a point.

It was also clear there could be no more Savitas. Her death and the circumstances around it shocked the nation - and the world. The fact that the fetus was non-viable, but Savita was still forced to undergo tremendous pain and eventually died, incensed people.

The inquiry into her death heard evidence from the hospital consultant that “Under Irish law, if there’s no evidence of risk to the life of the mother, our hands are tied so long as there’s a fetal heart heartbeat”.

The consultant stated that if risk to the mother was to increase, then a termination would have been possible, but that it would be based on actual risk and not a theoretical risk of infection. “We can’t predict who is going to get an infection”.

The parsing and analysis was clear, Savita died because of a ludicrous law barring a termination of a non-viable fetus.

There was no quick fixes Abortion was still the third rail of Irish politics, but the 8th Amendment was fatally flawed. A referendum to overturn the 8th law had to be held like same-sex marriage however, there was no certainty to the result.

Everyone was on untested ground.