Ireland's politicians and campaign groups are responding after the US Supreme Court overturned Roe v Wade, which protected access to abortion at the federal level across the country. 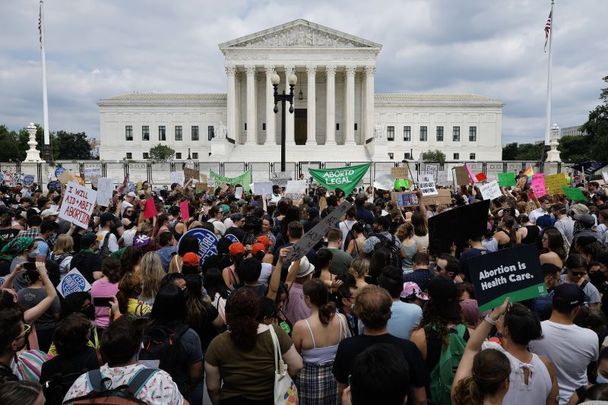 June 24, 2022: Thousands of abortion-rights activists gather in front of the US Supreme Court after the Court announced a ruling in the Dobbs v Jackson Women's Health Organization case which overturns the landmark 50-year-old Roe v Wade case and erases a federal right to an abortion. Getty Images

Ireland is reacting - negatively and positively - to the US Supreme Court's decision to overturn Roe v Wade, the landmark 1973 decision that protected a women’s right to abortion.

With Roe v Wade overturned, access to abortion in the US will now be determined at the state level. 26 states are now certain or likely to ban abortion outright, including 13 states that have 'trigger laws' which will automatically enact bans quickly, the Guttmacher Institute, a pro-choice research group, predicts.

The change in US policy comes just over four years after Ireland voted via referendum to overturn its constitutional ban on abortion. Despite the referendum result, or perhaps because of it, abortion remains a divisive subject in Ireland.

On Friday, Ireland’s Minister for Health Stephen Donnelly told the Irish Examiner that the changes to US Supreme Court rulings “have zero impact on the provision of healthcare services in Ireland.”

He added: "Termination services are being expanded in Ireland, with four more hospitals providing services this year."

Ivana Bacik, the leader of Ireland’s Labour Party, separately wrote in the Irish Examiner that the US Supreme Court’s judgment “undoubtedly represents a shocking step backwards,” but that it also has “two important messages for us here in Ireland."

Bacik says the Supreme Court’s decision “should strengthen our resolve to ensure effective access to safe, legal terminations of pregnancy” in Ireland, while also serving as a reminder in Ireland and across the world “that we can never take progress on women’s rights for granted.”

The Labour Party announced that it would be protesting the decision outside of the US Embassy in Dublin on Sunday.

Join us to protest the decision to overturn Roe V Wade

Sunday the 26th at 5pm outside the US Embassy in Ballsbridge #RoeVsWade #Repeal pic.twitter.com/TMAD3IBZGb

Sinn Féin TD Louise O’Reilly said that the overturning of Roe v Wade “is depressing & worrying," while Social Democrats TD Holly Cairns said it is ”a stark reminder that the fight for reproductive rights is never over.” People Before Profit TD Brid Smith said "we won #Repeal - the fight back in the US begins."

While many Irish politicians lamented the turn of events in the US, the Irish political party Aontú welcomed it, saying "future enlightened generations will see it in the same light as emancipation from slavery."

Pro-choice and pro-life groups in Ireland, of course, had opposing reactions to the Supreme Court decision.

We condemn the SCOTUS overturning #RoeVsWade, meaning abortion "trigger bans" will be activated in 13 states. "Abortion bans are racist, they are misogynistic, and fallout from this decision will be catastrophic". Read our full statement here: https://t.co/Ke301wUxDy pic.twitter.com/ZKevtjEsTP

ARC spokesperson Darina Murray said on Friday: “Abortion bans are racist, they are misogynistic, and fallout from this decision will be catastrophic.

“We in Ireland know how an abortion ban creates stigma, isolation, causes long-term damage to health and even death. We also know that abortion bans disproportionately affect marginalised people such as migrants and people of colour.

“This is not an isolated or sudden incident – this is the culmination of a decades-long quest from anti-abortion groups to erase reproductive rights. We must resist the erosion of our hard-won rights at every turn – in the USA, in Ireland, and across the globe.”

At the other end of the spectrum, Eilís Mulroy of Ireland's Pro Life Campaign said: “Today’s decision is a momentous development for the right to life. It means that for the first time in almost 50 years, it is possible once again to legally protect unborn babies in the United States.”

She added: “The debate taking place in the US on abortion is not all that dissimilar to the debate that has been happening in Ireland. Ultimately, it comes down to the value we place on human life as a society.

"Those who campaigned for repeal of the Eighth Amendment in Ireland like to think of the issue as settled. But as the debate in the US shows the issue is far from settled."