Irish doctor says “women will die” if Roe v. Wade is overturned in the US

“Women will die as a consequence of this," Irish man Dr. Peter Boylan said about the US Supreme Court potentially overturning Roe v. Wade, which protects women's access to abortion. 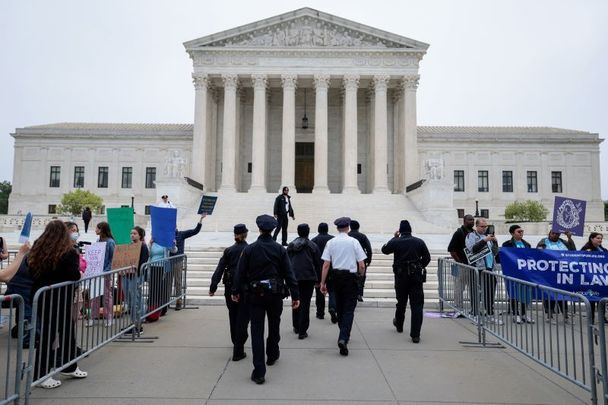 May 3, 2022: US Supreme Court Police officers set up barricades on the sidewalk as pro-choice and anti-abortion activists demonstrate in front of the US Supreme Court Building in Washington, DC. In a leaked initial draft majority opinion obtained by Politico, Supreme Court Justice Samuel Alito allegedly wrote that the cases Roe v. Wade and Planned Parenthood of Southeastern Pennsylvania v. Casey should be overturned, which would end federal protection of abortion rights across the country. Getty Images

Dr. Peter Boylan, a retired senior OB-GYN in Dublin who has delivered thousands of babies, says it will be a “tragedy” if the US Supreme Court overturns Roe v. Wade.

"Living in a country the size of the United States, and the size of the individual states, where a woman cannot access abortion care, will end up with maternal death,” Dr. Boylan recently told CBS Mornings.

“There is no question about that,” he said. “Women will die as a consequence of this.”

Dr. Boylan was responding to a question about what his advice would be about the reality of living somewhere where women cannot access abortion, which until only a few years ago was the case for Ireland.

He added: "It's medieval. You know, it's what is supposed to be the greatest democracy in the world. It's just a tragedy for the United States."

Dr. Boylan's sentiments are supported by the World Health Organization (WHO), which reported last November that "lack of access to safe, affordable, timely and respectful abortion care, and the stigma associated with abortion, pose risks to women’s physical and mental well-being throughout the life-course."

The US could be on course to becoming one of these "highly restrictive" countries nearly 50 years after the US Supreme Court ruled in its 1973 Roe v. Wade decision that the US Constitution protects a woman’s liberty to choose an abortion without excessive government restriction.

In an explosive report on May 3, Politico revealed that the "Supreme Court has voted to strike down the landmark Roe v. Wade decision," according to a leaked initial draft majority opinion written by Justice Samuel Alito.

"We hold that Roe and Casey must be overruled." Alito wrote in the draft majority opinion.

He further wrote: "It is time to heed the Constitution and return the issue of abortion to the people’s elected representatives."

In the wake of the leak, there have been plenty of comparisons between Ireland and the US regarding abortion access. While Roe v. Wade made access to safe and legal abortion a constitutional right in 1973, it was 2018 before Ireland voted by referendum (with a vote of 66.4% to 33.6%) to repeal its Eighth Amendment, which had effectively outlawed abortion in the country.

Gretchen E. Ely, Professor of Social Work and Ph.D. Program Director at the University of Tennessee in the US, wrote after the leak that she sees many parallels between the US now and Ireland before abortion was legalized.

Ely notes that currently in the US, people are already traveling long distances to access abortion, similar to the "abortion trail" many Irish women faced when having to travel abroad for abortion prior to legalization.

She writes: "In contrast to the United States, Ireland is moving away from political control over private life.

"If Roe is reversed and abortion is criminalized in much of the US, pregnant people could face decades of forced pregnancy, suffering, and even death – as was the case in Ireland prior to 2018."