Ireland’s abortion battle heats up after US court decisions

Pro-life and pro-choice campaigns in Ireland are gearing up as the Irish government prepares to review its abortion legislation. 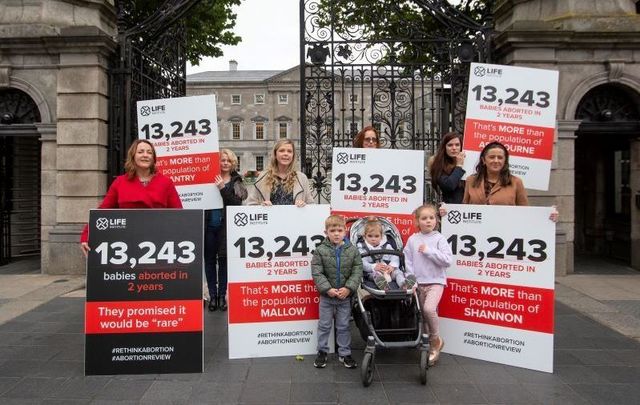 October 14, 2021: The launch of The Life Institute's national pro-life billboard campaign, as part of the #RethinkAbortion initiative ahead of the 3-year abortion review promised by the Health Minister. RollingNews.ie

Events in America surrounding abortion rights have had a galvanizing impact in Ireland too.

Last Wednesday, October 20, over 100 people gathered outside Dáil Éireann to call on Irish legislators to rethink the current laws on abortion. It was effectively the first shot in what promises to be a long, drawn-out campaign by pro-lifers to get significant changes to current legislation introduced in the wake of the passage of the abortion referendum three years ago.

The government has committed to reviewing the legislation this year and the process is expected to commence within the next few weeks. As with everything to do with what is euphemistically called the “life question,” this will be a contested and contentious debate.

Lined up on the opposing side will be a number of organizations who will argue that the current abortion laws are too restrictive and should be further liberalized.

Both sides feel that they have the weight of history behind them, but on Wednesday evening, there was no doubt that given the changes in legislation taking place across the Atlantic along with advances in neonatal care, the pro-life supporters had an extra pep in their step.

So, what exactly are the major issues in the upcoming review, and what are the battlegrounds?

The organizers of the rally, the Life Institute, said it is essential that the review investigates what they call the “devastating failures of the abortion legislation,” including the abortion of a perfectly healthy 15-week baby in 2019 on the basis of a misdiagnosis at Holles Street hospital in Dublin. The parents of the baby boy indicated they felt under pressure to abort their child and were advised not to wait for the result of a second test.

Organizers are also seeking changes to introduce legislation to ensure that the fetus is given pain relief during late-term abortions, as well as an outright ban on abortions of pre-born babies with a disability. At the heart of their campaign, which includes a nationwide billboard rollout, is an effort to draw attention to the large increase in terminations since the repeal of the 8th Amendment three years ago which allowed abortions only in the case where the life of a pregnant woman was at risk.

At the Rethink Abortion Rally at Dáil Éireann, Wednesday, 20th October to urge TDS and the public to #rethinkabortion

More coming to check back soon. If you have any photos or video, please send them and we will include! pic.twitter.com/jvfOk5QlWH

On the opposite side, pro-choice advocates are looking for an extension of the three-day waiting period for access to a termination of pregnancy as well as an extension of the 12-week limit before which an abortion does not need to be medically justified.

Crucially, any extension of this period will bring into the firing line unborn children with Down syndrome, a condition that can be diagnosed from week twelve onwards. The pro-choice activists cannot claim ignorance on this point as in the past they extensively used the views of Dr. Chris Kaposy, a bioethicist who has previously stated that in the U.S., the average gestational age at abortion in cases of Down syndrome was 13 weeks.

Activists on the pro-abortion side are also seeking new laws to ban vigils outside of abortion clinics and to create buffer zones.  According to one local politician, people feel intimidated by small groups “walking around the perimeter of hospitals, holding rosary beads and praying.”

The gardai says it is well capable of dealing with such public order incidents, and in a letter to the Department of Health, the Garda Commissioner Drew Harris said that existing public order legislation was adequate to deal with protests seen to date outside health service clinics over abortion provision.

There is also a move to change the rights of doctors and healthcare providers to make a conscience-based refusal of care, the so-called “conscientious objection” where healthcare professionals can refuse to provide an abortion if it conflicts with their personal or religious beliefs.

The Abortion Rights Campaign group has called on the government to look to Sweden and Finland, where the patient’s rights come first and refusals on grounds of conscience are not permitted. However, most observers believe that any changes to dilute this aspect of the legislation are destined to find their way through Ireland’s courts and onwards to the European courts.

The General Medical Council, the body representing doctors, in its advice to its members stated that “doctors may refuse to provide, or to participate in carrying out a procedure, lawful treatment or form of care which conflicts with their sincerely held ethical or moral values.”

It goes on to state that doctors holding a conscientious objection to treatment "must inform the patient that they have a right to seek treatment from another doctor; and give the patient enough information to enable them to transfer to another doctor to get the treatment they want."

In terms of funding, the pro-choice groups have a distinct advantage. Many of the proponents are in receipt of generous state funds.

For example, the National Women’s Council of Ireland, which has been to the forefront in the liberalization campaign, received almost $1 million in state funding in 2020. A case surely of the government paying lobbyists to lobby against themselves.

A further $35,000 came from the New York-based Center for Reproductive Rights. A certain irony there considering the brouhaha over U.S. funding to the pro-life side in the past.

They also have an advantage when it comes to media coverage. The state broadcaster RTÉ will be under close scrutiny in relation to its coverage of the review. However, the omens are not great.

The protest on Wednesday night received no coverage, while a similar event two weeks ago organized by the Abortion Rights Campaign, attracting the same size crowd, received full coverage across all of RTÉ's platforms.

This comes in the wake of a documentary looking at, indeed celebrating, the referendum campaign that legalized abortion. A program that was billed by RTÉ as “compelling, succinct and goosebump-inducing” was succinct only in terms of restricting voices that differed from the preferred narrative. Diversity of views is not a strong point within RTÉ.

The ball is now in the Minister for Health Stephen Donnelly’s court. His task is to instigate the review initially through setting out the terms of reference and appointing an independent expert. There is no commitment to change the law, just a promise to consult widely.

This issue is under the radar at present. How much the general public will engage is an unknown.

It is, after all, just three years since we had the referendum. Positions taken then will be hard to sway, a fact that will weigh heavily on any proposals to make changes. But it is a slow burner and given the emotions that are often unleashed by any discussion on abortion, it is sure to catch fire at some stage, just like what’s happening right now in Texas.

*This column first appeared in the October 27 edition of the weekly Irish Voice newspaper. Michael O'Dowd is brothers with Niall O'Dowd, founder of the Irish Voice and IrishCentral.