Danny Morrison argues that British efforts to rewrite the history of The Troubles "is about drawing a line through British criminality, murder, and torture." 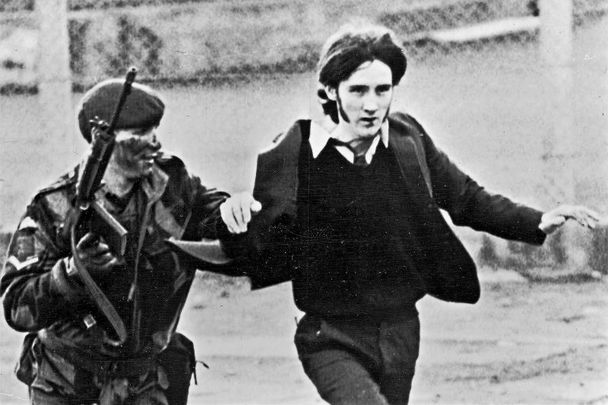 In October 1972, nine months after thirteen civil rights marchers had been slain in Derry on an anti-internment march by paratroopers, a prison officer screwed a new sign to the front gate of Long Kesh Prison Camp. It read: "HMP Maze Prison."

Relieved British embassies around the world, which had been under immense pressure over Britain’s appalling human rights record in Ireland, now briefed the various media that Long Kesh had been closed down and internment ended.

Meanwhile, the prison governor visited each Cage, gave each internee a sheet of paper, including my friend Joe Clarke in Cage 3 who had been tortured as one of ‘the hooded men’, and told them that they were no longer interned.

Until the governor said, "You’re no longer an internee. You’re now a detainee."

It was the type of fantastic legerdemain that the likes of Boris Johnson (then aged eight) would have reveled in . . . and now does.

Internment ‘officially’ ended in December 1975 only when the British government was ready to try out its next big idea: building the H-Blocks at Long Kesh - which it called ‘H.M.P. Maze (Cellular)’ - where it would attempt to criminalise republican political prisoners. That strategy was defeated at a heavy cost in human life and suffering by the 1981 hunger strike, during which Bobby Sands was elected to the House of Commons and Kieran Doherty to Dáil Éireann. It also led to the electoral rise of Sinn Féin, now the most popular party in consecutive opinion polls in both North and South.

In November, the pro-Tory Daily Telegraph revealed that the British government was planning to commission "an official history of the Troubles," spanning the '60s through to the signing of the Good Friday Agreement. It would involve historians appointed on privy council terms; that is, bound by official secrets.

Professor Diarmuid Ferriter of UCD answered in the vernacular for most self-respecting historians, when asked by the BBC what he would say if he was invited to participate in the writing of an ‘official history’: "I think I’d say, get stuffed."

"I think I'd say get stuffed,"

Professor Diarmaid Ferriter - on what he'd say if the NIO called and ask him to help write an official history of The Troubles. @MarkCarruthers7 pic.twitter.com/0Qxpz4wVlv

Recognising it for what it is—a propaganda exercise, aimed at exonerating the British state over its dirty war in Ireland—the plan was heavily criticised by the Dublin government, most political parties in Ireland, and human rights groups representing victims and survivors of the conflict.

It followed on the heels of British government proposals last July to introduce legislation that would protect its soldiers and agents from further legal scrutiny and investigation by way of a general amnesty. The amnesty would end prosecutions for any pre-1998 conflict-related actions, would end inquests, Police Ombudsman investigations, and end all civil litigation by families or victims of judicial injustice such as internees or those falsely convicted.

The honing and use of European human rights and domestic law by a competent and confident new breed of lawyers exposing Britain and holding it to account was fathered by the work of the late Pat Finucane. In 1989, RUC officers had proposed to loyalists that Finucane be killed, gave the information to his killers (who were all state agents), failed to stop the attack, and then obstructed the murder investigation, just as the British government has done with a promise as part of the peace process to hold a public inquiry.

It is all an attempt to control the narrative.

I have no doubt that many academics will sign up. In 2013, a group of historians, belonging to an organisation called Arkiv, made proposals (very close to those now suggested by the British), the net effect of which represents a rebuttal of Truth Commissions which would be "heavily biased towards state violations and crime" or which are "dangerously slanted towards narratives of broadly shared blame and the effective equivalence of state and non-state forces."

Arkiv was also heavily critical of Anne Cadwallader’s well-received book, Lethal Allies: British Collusion in Ireland, for allegedly having a ‘Brits are behind it all’ mentality.

You get the drift.

Among those whose work Arkiv commend is that of Lord Professor Paul Bew. Bew was a former senior political advisor to Ulster Unionist First Minister David Trimble. The Boston College’s Belfast Project, a debacle that seriously damaged and undermined oral history projects, was his great idea. Historian and author Tim Pat Coogan described the project as a "well-laid plot to destroy both [Gerry] Adams and the process he did so much to create."

Since the IRA called an end to its armed struggle, the past conflict has been more dispassionately explored. False narratives about the supposed beneficent and moral role of the British, and that the conflict was mainly IRA generated, have taken a severe knocking. That collusion between British state forces and unionist death squads took place is now incontestable. When Sir John Stevens carried out his collusion inquiries the British government allowed him to publish only seventeen pages out of his 3000-page report.

The scale of collusion was also laid bare in RTÉ’s 2020 Unquiet Graves documentary about the Glenanne Gang, whose members included serving members of the RUC and British Army, and who killed over one hundred and twenty innocent civilians.

If you were to look at the killings by the loyalists, the RUC, the UDR, and the British army under the rubric of killings on behalf of the state, in support of the state and the status quo, the statistics of the conflict being to look a lot different.

Both the Daily Telegraph ("fears the narrative of the conflict is being distorted by republicans") and the Daily Mail ("fears Republicans are distorting narrative of conflict and IRA") let the cat out of the bag about the real motivation behind the writing of an ‘official history’.

An official history of The Troubles will be commissioned under government plans, amid fears the narrative of the conflict is being distorted by republicans. https://t.co/rlZGWfBUgF

The whole point of this ‘history’ and of the amnesty for British Intelligence officers who directed the dirty war is not about drawing a line through the past to allow society to move on but is about drawing a line through British criminality, murder and torture which emanated from 10 Downing Street and which was the primary source of the conflict.

*This article was submitted to IrishCentral by Danny Morrison, an ex-prisoner, a former Director of Publicity for Sinn Féin, and the current Secretary of the Bobby Sands Trust.