US delegation meets with Northern Ireland's political leaders at Stormont

The US Congressional delegation was at Stormont in Belfast today as it continues engagements abroad regarding Brexit's Northern Ireland Protocol. 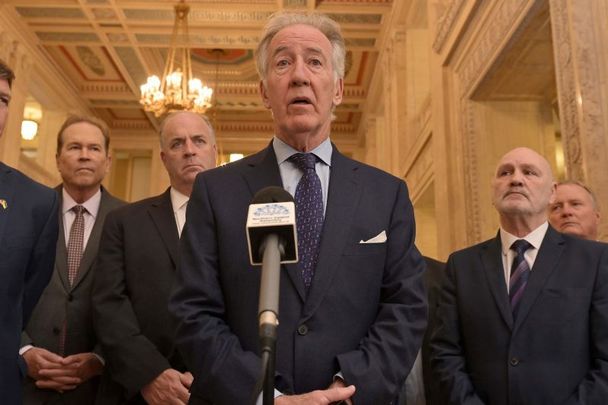 Congressman Richard Neal led in meetings at Stormont in Belfast today, May 26, as the bipartisan US delegation continues to call for more negotiation regarding the Northern Ireland Protocol.

“The common thread between all the voices, as well as my own, was support for negotiated solutions to resolve challenges related to implementation of the Northern Ireland Protocol," Neal said in a statement on Thursday after meeting with the leaders of Northern Ireland's political parties at Stormont.

"We have urged parties to stay at the table and negotiate in good faith to sort out their differences.

“We shared our support for a peaceful and prosperous Northern Ireland in which all communities can enjoy the gains made possible by the Good Friday Agreement now and in the years to come.

“Each party shared their eagerness to deliver for their constituents and to return to the regular order of governance. The people of Northern Ireland need Stormont up and running.”

Today, Chairman @RepRichardNeal met with leaders of the political parties of the Northern Ireland Assembly at Stormont.

Michelle O'Neill, Northern Ireland's First Minister-designate after Sinn Féin's historic gains in the recent elections, told reporters after the meetings: "For many years, we have enjoyed the support of successive American administrations in terms of our peace process, so I very much welcome the fact that we have such a strong delegation visiting here.

"We have had a very good meeting with them in terms of our shared objective which is to have this Executive and Assembly up and running, supporting people through the cost-of-living crisis, addressing our health service needs.”

Great to have a strong US delegation led by @RepRichardNeal visit us this week. Successive American administrations have supported and nurtured our Good Friday Agreement for the past 24years. Their continued support is vey much welcome. pic.twitter.com/208vIj8bVh

However, Sir Jeffrey Donaldson, head of the region's second-largest party the Democratic Unionist Party (DUP), told reporters: "It has been the most undiplomatic visit I have ever seen to these shores.

"The language, if I may be diplomatic myself, it has been unhelpful, and it displays an alarming ignorance of the concerns of unionism, and I can assure you that our words today to the delegation were not manufactured, nor are the legitimate and genuine concerns that we represent and that are shared by all unionists.

He added: "We reminded the delegation that not a single unionist elected to this Assembly supports the Protocol, that powersharing only works on the basis of a cross-community consensus, and that that consensus does not currently exist.

"What we need now are solutions. What we do not need are people telling us that we must fully implement a Protocol that is harmful to Northern Ireland, and if it were fully implemented would present what I regard as an economic tsunami for this place."

Doug Beattie, head of the Ulster Unionist Party (UUP), was more measured, telling reporters: "They [the Americans] understood the unionist point of view in regards to the Belfast Agreement and how our relationships east-west, and north-south are being damaged and how they can be easily fixed.

"We made it clear that if they didn't come out of it (meeting) understanding the unionist point, then they haven't been listening.

"I think they get it now. But we will know if they get it if they come out and say 'we now understand,' because we made that point quite heavily to them."

Stephen Farry of the Alliance party said that the US delegation is "very welcome in Northern Ireland" and described Thursday's meetings as "positive and constructive."

Farry said: “Successive US administrations and Congress have been supportive of Northern Ireland at different times in our peace process. We share a desire to ensure that Northern Ireland is protected from Brexit, with the opportunities from the protocol maximised, while the challenges are overcome.

“We made two requests from the delegation. First that they should continue to stress to the UK Government the need to build trust to work in partnership with the EU and avoid damaging unilateral action that makes that task harder.

"And second, while we understand the frustrations of the EU, we ask them to continue to encourage them to go that extra mile in flexibilities, building upon their papers from October 2021, to achieve as many flexibilities and mitigations as possible.”

Constructive meeting with the US Congressional delegation. There is a shared desire to ensure NI is protected from Brexit, with the opportunities from the protocol maximised, while challenges overcome. pic.twitter.com/oqlAM8okwl

Colum Eastwood, head of the SDLP, also described the Stormont meetings as "productive" and said it is fortunate that "some of the most high-ranking political leaders in the world take an active and engaged interest in the stability of our institutions."

Eastwood, however, went on to call out the DUP for their continuing refusal to enter power-sharing at Stormont as a matter of protest about the Protocol.

SDLP Leader @ColumEastwood and South Belfast MLA @MatthewOToole2 met with the US delegation led by @RepRichardNeal this afternoon.

No one wins by walking away from their responsibilities. That’s our message to the DUP and the British Government.

It’s time to get back to work 👇 pic.twitter.com/eLfTiq9Kq1