Congressman Richard Neal again reaffirmed the US commitment to the Good Friday Agreement and called for more Northern Ireland Protocol negotiations while addressing the Seanad on Tuesday. 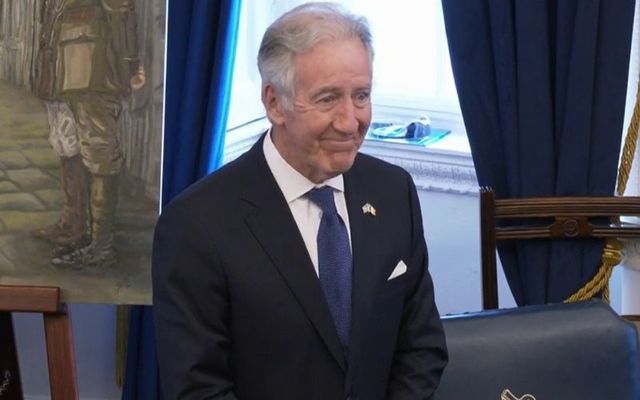 US Congressman Richard Neal is leading a bipartisan delegation of members of Congress in engagements in the EU, UK, and Ireland this week before heading to Northern Ireland tomorrow, May 25.

On Tuesday, Congressman Neal, the head of the Ways and Means Committee and co-chair of the Congressional Friends of Ireland Caucus, addressed the Seanad Éireann in Dublin's Leinster House.

“He wants to and we want to expand Irish American influence at all levels of government," Cathaoirleach (chair) Mark Daly remarked while introducing Congressman Neal.

Addressing Seanad Éireann, Neal noted that while most of his delegation are removed by only one or two generations from Ireland, they all have a “longstanding commitment to deepening our ties between the two countries and protecting the precious peace that our country helped supply the background for now 24 years ago.

“I know something about that Agreement," Neal said, "I helped urge Bill Clinton and George Mitchell to take it up and it has been successful beyond anybody’s imagination.”

Acknowledging a "worrying and uncertain" time in Northern Ireland, Neal said he and his delegation "are here to listen to the views of political leaders in Dublin and tomorrow on to Belfast for two very serious days with all the political parties.

“We want to meet with people so that we can understand what the fallout from the UK’s decision to leave the EU has affected all of them and us.

“This message we will bring is firm, clear, and unambiguous: The number one priority for the United States on this island is to ensure that the hard-won peace in Northern Ireland is preserved and reinforced.”

Neal said it is “apparent” that Brussels and Ireland’s neighbors in Europe remain “equally strong in their commitment” to Northern Ireland.

While Neal said he respects the UK’s decision to leave the EU, “it has inevitably posed unprecedented challenges for the island of Ireland.”

He continued: “We have found solutions time and again to short-term disruptions. Now, it is the Protocol.

“A solution through an extended set of negotiations on Northern Ireland and Ireland can be enhanced. Any incautious move to undo the Protocol, which was agreed to by all sides to address these issues, would put at risk this durable agreement that we helped to create, and now, we should all be celebrating.

“On the eve of the 25th year of the Good Friday Agreement, everything in our power to protect the unrelenting gains should be acknowledged.

“Through the context of the moment, the way forward is the same as it has been. We need courage, dialogue, and leadership from all sides to keep Northern Ireland secure and prosperous.

“The Good Friday Agreement worked because it had something in it for all sides. It happened because those involved acted together in good faith,” he said, adding, “everybody gave up something to agree to this place.”

He added: “Unilateral actions, intransigents, and ultimatums are not solutions, nor have they ever been.

“America will continue to nudge and nurture this agreement. After all, the Good Friday Agreement is America’s, too.”

Neal said his Irish ancestors would be “proud of the Ireland” he and his delegation encountered this week.

“The heritage of this congressional delegation, along with President Biden, epitomizes the Irish contribution to government in America,” Neal remarked.

“We know how important the United States has been in helping the parties in the North carve out a path to a better future for all. We are committed to staying the course and keeping the North on that path of peace and prosperity.”

After reflecting on his own encounter with British patrols on the Irish border, Neal said: “No one wants to return to when a border control across the island divided its people.

“That is why the EU-UK Protocol is so important and why its implementation needs to be the subject of a negotiated agreement, and not unilateral action.” Neal’s comments here were met with applause.

“The principle of consent does not mean veto.”

Concluding his speech on a sentimental note, Neal said: "I would remind all, as Yeats did, that though the leaves are many, the root is one. Thank you, form the United States of America." Neal received a standing ovation.