Congressman Richie Neal said at an event in Springfield, Massachusetts honoring the 1981 hunger strikers that children will see a united Ireland in their lifetime. 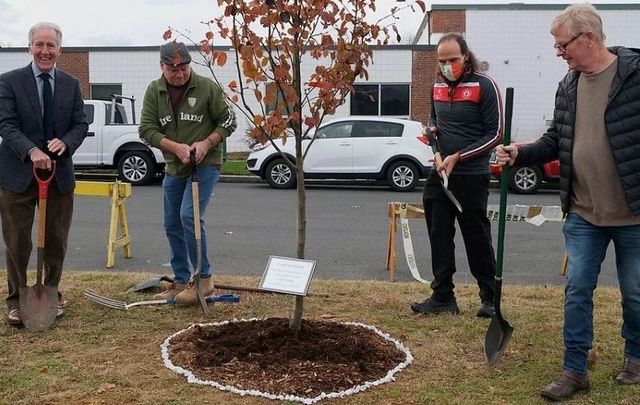 Congressman Richie Neal was on hand to assist the Friends of Sinn Féin group plant a tree for Irish unity at the John Boyle O’Reilly Irish Centre in Springfield, Massachusetts.

"Crann na Saoirse – A Tree for Irish Unity" is a "symbol of hope," according to Friends of Sinn Féin.

"As the tree blossoms, so will Irish unity," the group said.

Planting A Tree for Irish Unity "Crann na Saoirse" Springfield (MA) with @RepRichardNeal ????following in the steps of @GerryAdamsSF pic.twitter.com/I05X44qG5M

Neal, who is the head of the Ways and Mean Committee as well as the Democratic leader of the Friends of Ireland Caucus in Congress, helped plant the tree during the Hunger Strike's 40th Anniversary Memorial at the John Boyle O'Reilly Club in Springfield, Massachusetts on Sunday, November 14.

At the event, a new memorial was unveiled honoring the hunger strikers who died at Long Kesh Prison in 1981.

Speaking at the event, Congressman Neal, a native of Springfield, said how the John Boyle O’Reilly Club was "ground zero in keeping the cause alive" when he was young. Neal said he attended events at the club in his youth, and “decided that this was a cause that was worth embracing.”

Neal spoke on the 1981 hunger strikers, British occupation, the Good Friday Agreement, and America's involvement in getting the 1998 accord over the line.

He went on to say that everybody gave up something in the process of the Good Friday Agreement, and the UK gave up the border in Ireland.

“Can we all agree on this today, there can never be a return to a border on the island of Ireland?" Neal said, which was met with applause.

Neal also received applause when he said: “By springtime, you’re going to be stunned by the demographic trends. There will be in those six counties a nationalist majority for the first time since Ireland was dreadfully partitioned one hundred years ago.”

Towards the end of his remarks, Neal added: “I was pleased with President [of Ireland] Higgins when he refused to travel to Belfast to commemorate partition.

“As Bob Fitzgerald’s dad used to say in here on Easter night, Northern Ireland was not a reality, it was a boundary that was set up by military force.

“So what we hope to see further progress,” Neal said, adding, “as you see these children here, they are going to someday witness a united Ireland.”

He concluded: “This is a marvelous time to witness what you all did to bring about a new day that ended violence in the north of Ireland. Thank you, from the United States of America.”

You can watch all of the remarks from Sunday's event in Springfield, Massachusetts here:

Elsewhere at Sunday's event, Danny Morrison, who acted as the prisoners' spokesperson, joined a question and answers session via Zoom. His contribution, which you can watch below, was marked by a standing ovation.