Makeshift memorials to the 10 Irish hunger strikers who died in 1981 have been popping up in Irish enclaves in New York. 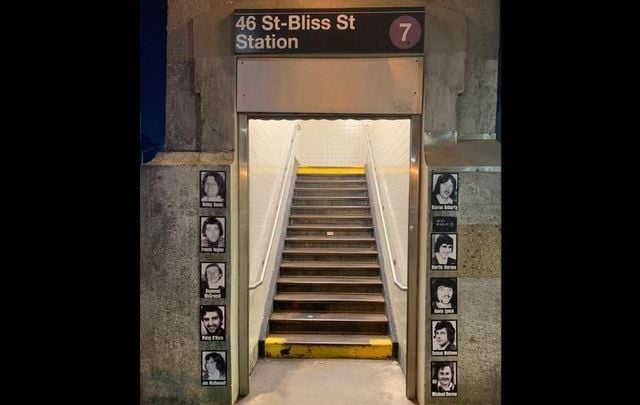 A tribute to the Irish hunger strikers at the 46 Street - Bliss Street subway station in Sunnyside, Queens in NYC. @WNYWI, Instagram

Irish and Irish Americans associated with the O'Donovan Rossa's Astoria GAA club are paying tribute to Irish hunger strikers at sites around New York City that have strong Irish ties.

A series of tributes to the ten Irish men who died while mounting hunger strikes in 1981 have been popping up around New York City in recent months.

On July 8, a photo of one tribute was shared on the relatively new When New York Was Irish (@WNYWI) Instagram account, marking the anniversary of the death of Irish hunger striker Joe McDonnell who died on July 8, 1981.

Speaking with IrishCentral on Thursday, the owner of the When New York Was Irish account, who doesn’t want his or her identity revealed, said: “A few friends from my GAA club and local community here in Queens have been marking each anniversary of the Hunger Strikers with a memorial in different traditional Irish neighborhoods.

“So far we have done Woodlawn, East Durham, Astoria, and Sunnyside and plan to mark the rest of dates around the five boroughs!”

The caption for the latest WNYWI post reads: “Today marks the 40th Anniversary of the death of IRA volunteer, Joe McDonnell. Joe died in a British prison after 61 days on hunger strike. Sunnyside, and the wider New York Irish community, remember Joe with pride.

“A family man and brave Irish patriot, Joe made the ultimate sacrifice. He unselfishly gave his life so that all people on the island of Ireland, regardless of race, religion or ethnicity, could live as equals in a fair and just society.

"With the completion of the Queensboro bridge in 1909, Sunnyside developed as a commuter village. A strong Irish population has been ever-present in this community and it was also home to the renowned Celtic Park.

“The park located between 48th and 50th Avenues and 43rd and 44th Streets, was an Irish cultural and sporting hub and the original home of Gaelic sports in New York.

“Celtic Park was critical to the development of the Clann na Gael, the flag bearer of Fenianism in North America.

“The immediate vicinity to the subway station boasts many strong links to Ireland, her people, and her history. The former Sunnyside Gardens Arena hosted numerous Irish-related events throughout the years. Notably, JFK  held a presidential election rally there in 1960 commenting, 'the Irish are very big out here.'

“The re-ignition of Ireland’s struggle for independence in the late 60s saw Sunnyside, and many other New York Irish communities, become focal points for fundraising in support of Irish freedom. Famed Derry IRA leader Sean Keenan gave a speech at Sunnyside Gardens to a large crowd in July 1972. Such fundraising events to support Irish freedom were constant in the area.

“Fittingly, the oration at Joe McDonnell’s funeral was delivered by Leitrim man and former IRA Chief of Staff with strong New York connections, John Joe McGirl. McGirl visited the Sunnyside area after his release from Long Kesh. A few years prior, he was honored by the local Irish community.”

The When New York Was Irish Instagram previously shared three other tributes erected around New York.

A tribute at the 30th Avenue subway stop in Astoria, Queens to mark the anniversary of Bobby Sands, who died on May 5, 1981:

A tribute on Katonah Avenue in the Woodlawn section of the Bronx to mark the anniversary of the death of Francis Hughes, who died on May 12, 1981:

A tribute in East Durham in the Catskills, New York to mark the anniversary of the deaths of INLA volunteer Patsy O’Hara and IRA volunteer Ray McCreesh, who both died on May 21, 1981: