Preparations are underway for US Vice President Mike Pence's visit to Ireland in September, though the trip has yet to be officially confirmed. 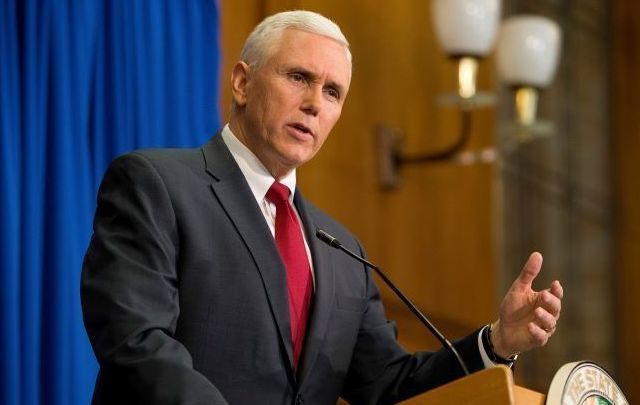 Preparations are underway for Pence's visit to Ireland though the trip has yet to be officially confirmed. Getty Images

"Tentative plans" for US Vice President Mike Pence's visit to Ireland in September are being laid out, according to reports.

In July, a spokesperson for Ireland’s Department of Foreign Affairs said: “The US Vice President has indicated his wish to visit Ireland this year.”

The spokesperson added: “While the Department of Foreign Affairs and Trade has had contact with the US administration on the proposed visit, it remains unconfirmed.”

While Pence's visit remains officially unconfirmed, Extra.ie reports this week: “A number of locations in Dublin, Cork, and Clare have been checked out ahead of the trip, which is expected to include at least one overnight stay.”

“Gardai [Irish police] are making ‘tentative plans’ for the arrival of US vice president Mike Pence – but ‘a full security plan’ will not be in place until the visit is officially confirmed by the US authorities. Sources say that the Army will position anti-aircraft missiles within the perimeter of either Dublin or Shannon Airport to counter any potential attacks to Air Force Two.”

“Gardaí have not yet been informed which airport Mr. Pence will fly into. However, it is understood that several thousand gardaí are on standby to police the proposed visit, as are the Defence Forces.”

“An Garda Síochána [Ireland's National Police Service] is preparing to liaise with the UK police to establish if ‘anarchists and criminals with a potential to try to attack the vice president’ will travel here to protest.”

Read More: A piece of US Irish history gifted to Ireland by Donald Trump

There are no apparent plans for Vice President Pence to visit President Trump’s golf resort in Doonbeg, Co Clare, where the President himself visited in June.

However, Pence could be visiting the village of Doonbeg for a stop at Morrissey’s Restaurant as it’s owned by his distant cousin Hugh McNally. Pence previously made a trip to Doonbeg in a personal capacity in 2013.

Of Pence’s potential visit, McNally told Extra.ie: “We’d be absolutely delighted to see him again, he has been a regular visitor and we are in regular contact with the family.”

Aside from cousins in Doonbeg, Co Clare, Vice President Pence has Irish roots in Co Sligo. In 1923, his mother's father emigrated to the US through Ellis Island from his home in Tubbercurry, Co Sligo.

Pence made reference to his Irish grandfather on the 4th of July this year in a tweet:

In March, the Vice President's Irish roots were discussed when Taoiseach Leo Varadkar was hosted by Pence at his Washington, DC residence for a breakfast during the Irish premier's St. Patrick's Day visit:

Honored to welcome the Taoiseach of Ireland Leo Varadkar to the Vice President’s residence for breakfast this morning to begin St. Patrick’s Day weekend. pic.twitter.com/igii8oQbWQ

During that meeting, Vice President Pence said: "Thank you also for the invitation to make an official visit to Ireland.”

“You did say the one condition was that I had to bring my mother.”

“And I am happy to report to Taoiseach Varadkar that I have spoken to mom – a first-generation Irish-American – and she has now confirmed that she would travel with me to Ireland and we are making plans to return to my grandfather’s homestead.”

Are you looking forward to seeing the US Vice President visit Ireland next month? Let us know in the comments!