Irish American Vice President should be rehearsing his post-Donald Trump speech in the wings. 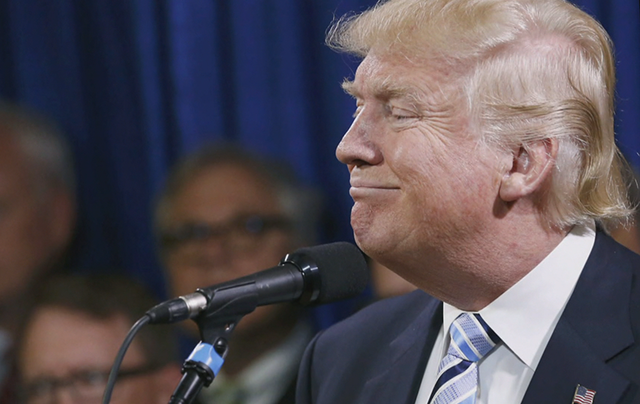 The deeply troubled presidency of Donald Trump seems doomed after only three months or so.

This from the NY Times:  "President Trump asked the F.B.I. director, James B. Comey, to shut down the federal investigation into Mr. Trump’s former national security adviser, Michael T. Flynn, in an Oval Office meeting in February, according to a memo Mr. Comey wrote shortly after the meeting.

“I hope you can let this go,” the president told Mr. Comey, according to the memo."

The nation stands aghast, our international allies are bemused and the harsh reality within the White House is that no one has a clue.

Every day brings a new crisis, and you do not have to be Democrat or Republican to understand we are witnessing one of the most bizarre occupants of the White House in American history, probably the most bizarre.

The latest bungle? Handing classified documents to the Russian ambassador and foreign minister in the Oval Office last week which likely exposes foreign agents and their locations to the Russians. Yet another example of how he is not fit for the office of president.

Trump is “deluded and compulsive,” said psychiatrist Dr. John Zimmer in The New Yorker this week, arguing that psychiatrists, who have long refused to speak out on persons they have not treated, have to now change that rule because Trump is so dangerous.

Zimmer has warned that politicians have massive responsibility to add checks and balances like never before to this president's actions.  We have not seen anything like that so far.

This is a man temperamentally and intellectually unsuited and all at sea in a job he should never have been given by the American voters.

Read more: U2 take aim at Trump in first concert of 'The Joshua Tree' tour

Every president is entitled to his own mistakes, especially in the early months as they come to grips with the job, but Trump has approached the position like a plumber suddenly tasked with performing heart surgery.

He has no clue how to wield power, has surrounded himself with a bunch of yes men and women, and has a family with no political experience advising him on everything from the Middle East to health care reform.

What the bottle blonde daughter Ivanka and her vacuous husband Jared know about the world, having been born to great wealth and privilege, remains an utter mystery.

Meanwhile, as his tweeting mania proves, Trump is obsessed with old battles and settling scores from the election, and imagining he can mislead media and make up lots of stuff and hire and fire just like he did in his real estate days.

There are serious conversations now occurring that he is mentally ill, simply unable to discharge power in the most important job in the world.

The president had stumbled and stuttered through his first 100 days, but in the firing of FBI Director James Comey we see the seeds of his own destruction.

He told Lester Holt on NBC that he had fired Comey because he continued to probe the Russian influence in the last election.  As the Trump campaign is a target of that inquiry, Trump was essentially obstructing justice according to many legal experts.

By admitting that was his motive, Trump undermined his own media operation which had given different information just the day before.

And while it might be funny and enjoyable to watch the roasting of press secretary Sean Spicer on 'Saturday Night Live,' let's also agree that keeping a press operation in the dark and then contradicting his spokespeople is a sure way to lose all credibility.

Trump has them convinced he can do no wrong. They are clearly prepared to go out and argue the world is flat if Trump convinces them it is so. They are caught up in a mind-bending illusion that Trump cannot tell a lie, and it is all the fault of the mainstream media.

The media do bear a heavy burden, and that was in not examining Trump and his limitations during the presidential election.  Lured by huge ratings, they covered him as a TV phenomenon and not a presidential candidate as most believed he had no hope.

Alas, it is now too late. The clock is ticking with Trump, and one wonders how much more of his bizarre behavior the country can put up with.

Future President Mike Pence should really be rehearsing his post-Trump speech in the wings.