“In a democracy, the government should fear the citizens, not the other way around." 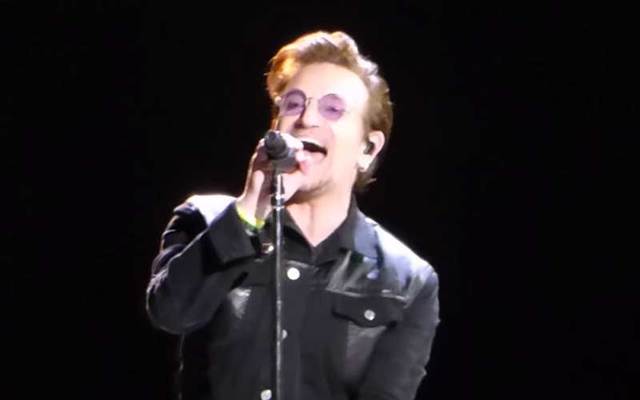 A snapshot of Bono singing during the opening night concert of U2's The Joshua Tree 2017 tour in Vancouver. YouTube/U2gigs.com

U2 took on President Donald Trump during the opening night concert of The Joshua Tree 2017 tour at B.C. Place in Vancouver on Friday night.

Later he urged the audience to “send a message from Canada to the U.S.A.,”  and then led the crowd in a chorus of “power of the people; so much stronger than the people in power.”

.@U2 gave Vancouver much more than an album play through at the first stop of the #U2JoshuaTreeTour2017: https://t.co/bcRD3ToTvI pic.twitter.com/jQucXQVwfr

The Globe and Mail reports that at one point during the show, clips are played from an episode of the 1950s black-and white TV western 'Trackdown' in which a con man named Trump comes to town to warn citizens to protect themselves from the end of the world by building a wall.

During the concert, Bono tells the crowd: “In a democracy, the government should fear the citizens, not the other way around.”

U2 is touring North America and Europe to celebrate the 30th anniversary of the 1987 album 'The Joshua Tree,' which included such hits like 'With or Without You' and 'Where the Streets Have No Name,' by playing it in its entirety each night of the tour. The album is scheduled to be reissued  in several different formats on June 2 to commemorate the album’s 30th anniversary.

In an interview earlier this year with Rolling Stone, U2 guitarist the Edge talked about how the band decided to go on tour after the 2016 election to promote the fifth studio album from their back catalogue.

“It's like a pendulum has suddenly just taken a huge swing in the other direction. So, anyway, we then were looking at the anniversary of 'The Joshua Tree,' and another thing started to dawn on us, which is that weirdly enough, things have kind of come full circle, if you want,” he said.

“That record was written in the mid-Eighties, during the Reagan-Thatcher era of British and U.S. politics. It was a period when there was a lot of unrest… It feels like we're right back there in a way. I don't think any of our work has ever come full circle to that extent. It just felt like, "Wow, these songs have a new meaning and a new resonance today that they didn't have three years ago, four years ago."

The show ended with the debut of 'The Little Things That Give You Away', a new song from upcoming album, 'Songs of Experience.'

Encores:
Beautiful Day
Elevation
Ultra Violet (Light My Way)
One
Miss Sarajevo
The Little Things That Give You Away