"In the coming weeks and months Paul Ryan will have a chance to show he has a spine as the pressure mounts on congress to investigate Donald Trump’s Russian connections. Will he stand up for America?" 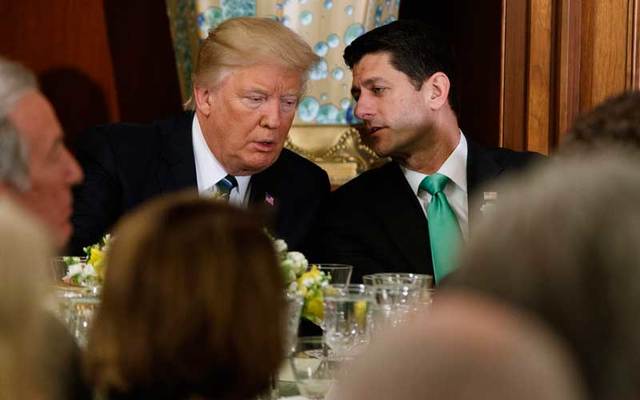 This past week two New York Times columnists, Maureen Dowd and Timothy Egan wrote about one of President Trump’s persistent enablers, Speaker of the House Paul Ryan of Wisconsin. I have interviewed both Dowd and Egan for profiles and we have stayed in touch. I was delighted to see that they both used my sobriquet for Ryan—“The Irish Undertaker.”

When I first came up with the nickname it was solely based on Ryan’s perpetual gloomy appearance, which matched his dark tax cut scheme for the rich and plans for cutting social programs for the needy, such as food stamps and now health care.

Now, the Irish undertaker looks like he will help bury American democracy as we know it.

This is a man who prefers Ayn Rand polemics to people. That became obvious to me in the summer of 2012, when the news reached me in Dublin that Mitt Romney, a man who thinks corporations are people, had picked Paul Ryan to be his vice-presidential running mate.

My first reaction was laughter. “They are going to have to hide this fellow,” I thought to myself because of his many harebrained economic schemes — and that’s exactly what the Romney folks did. Ryan proved such a bad candidate that President Obama easily won Ryan’s own congressional district in the 2012 election.

Ryan proved then he would say and do anything to gain power and he’d ride there on the backs of the weakest in society to please his rich mentors. Oh sure, he’d pretend otherwise that he was defending and enlightening the poor, but it was really a get richer scheme for the Ritchie Richs and not a very good one at that.

I was reminded of the wonderful wake scene in Edwin O’Connor’s The Last Hurrah which has a money-grubbing mortician who likes to shake down grieving families until he gets his comeuppance from the tough Irish mayor Frank Skeffington — wonderfully played by Spencer Tracy in John Ford’s movie version — who lowers the boom on the thief by threatening to pull his license. Ryan has all the sincerity and backbone of that undertaker.

When Ryan was on the rise he promised to tackle poverty in America. Ryan once told an apocryphal story about an inner-city child who refused a free school lunch because it left him with “a full stomach and an empty soul.” In other words don’t eat because you would betray Ayn Rand type principles.

I found that an unbelievable statement from a man who likes to boast about his Irish ancestors: “I come from Irish peasants who came over during the potato famine,” he once said. Does he not see the deadly irony in the fact that his people ran away from Ireland because of hunger and now he questions the values of free school lunches and food stamps and medical care?

It is obvious that this Irish-Catholic acolyte of Ayn Rand has more Tory in his soul than Celt.

And this comes from a man whose mouth has been welded to the government teat since his teenage years. In fact, almost hilariously, his only job out of government was in college when he was an Oscar Mayer Weiner salesman and got to drive the fabled Wienermobile. His resume reads like a skit out of Saturday Night Live.

Ryan has never shown courage, especially when confronting Trump. When Trump’s “grab them by the pussy” statement became public Ryan responded by saying “I am sickened by what I heard today.” Apparently, he was not sickened enough to pull his support from Trump. You know Ryan wouldn’t allow his wife in the same room alone with Trump, but he is fine with him being President of the United States of America. Perhaps Ryan should put down his Ayn Rand and pick up Profiles in Courage by John F. Kennedy.

In the coming weeks and months, Paul Ryan will have a chance to show he has a spine as the pressure mounts on congress to investigate Donald Trump’s Russian connections. Will he stand up for America? Or will he shield the man with the out-of-control Twitter account and the audacity to fire anyone, even an FBI chief who refuses to bend the knee to him?

We will soon find out if Ryan is a man of principle who cherishes the Constitution or is he the Irish Undertaker who will, indeed, help bury the great American democracy. I’m not holding my breath. I can see him, standing by the coffin, muttering his best wishes to the relatives of the deceased. The Irish Undertaker indeed.