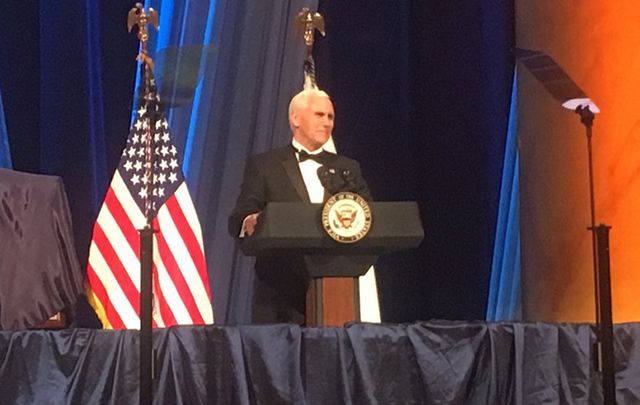 In a rousing speech focused on his Irish roots and the ties between Ireland and the US Vice President Mike Pence told the American Ireland Fund gala dinner in Washington that US support for the peace process in Ireland would be a priority for him and President Trump.

He also stated that his main thought on the day he was inaugurated Vice President was what his Irish immigrant grandfather Richard Cawley, who was a Chicago bus driver for 40 years, would think.

He paid fulsome tribute to the impact of his Irish heritage and said whatever he achieved in life he put his success down to the values of that heritage.

He quoted Irish patriot Thomas Francis Meagher when discussing the peace in Ireland.

“On this side of the Atlantic, we remember Meagher for his bravery in our Civil War. He led the Irish Brigade I mentioned just a few moments ago, and he ultimately rose to the rank of brigadier general. He was originally from Ireland. In 1848, he famously designed the Irish tricolor that flies over the republic to this very day.

“I quote: 'The white in the center signifies a lasting truce between the orange and the green – and I trust that beneath its folds, the hands of the Irish Protestant and the Irish Catholic may be clasped in generous and heroic brotherhood.'

"Tonight, let’s all pray that those hands of brotherhood may never separate,” Pence said.

He promised President Trump would stand behind the peace process:

“And tonight, it’s an honor to be here on behalf of President Trump to reaffirm the United States’ enduring commitment to the Republic of Ireland and Northern Ireland, to the peace process, and above all else, to the timeless and enduring friendship between our people and yours."

He also highly praised the role of the Ireland Fund in the peace process.

Speaking of his beloved grandfather Richard Cawley, Pence stated, “It was Inauguration Day just a few short weeks ago. People ask me what I was thinking about surrounded by my wife and my children, our beautiful new daughter-in-law. My mother was just there, a few seats behind the President.

Pence and his wife attending a St. Patrick's Day Parade.

“I just kept thinking of that day in April in 1923. That was the day when Richard Michael Cawley stepped off the boat on Ellis Island. He was in his early 20s when he steamed into Upper New York Bay aboard the Andania, the ship that carried him here.

“I can't imagine what the sight of the Statue of Liberty meant to him that day, holding aloft the torch of freedom. My grandfather went home to be with the Lord when I was in about my 26th year, but we were very close. He said I was the only Irishman born among the four boys in our family. (Laughter.) Not sure yet what that meant. But I was flattered by it."

He noted the town his grandfather hailed from and his trips back to the region.

“My grandpa had grown up in a little town called Tubbercurry, in County Sligo. When I was a young man I had a chance to visit that house before they tore it down. It was just a two-room house where his eight brothers and sisters grew up.

“And I literally walked up the hill that – when Karen and I and the kids visited Ireland just a few years ago, we walked up that hill, as well. The legend in our family was my great-grandmother had stood outside that little house and looked over at the Ox Mountains and looked off to the west, and told him that he needed to go because she said, 'There’s a future there for you.” He wouldn’t speak to his mother for 25 years. And when he said the old country, he said it with a reverence that I could never adequately express. He talked about crossing the pond, talked about the heartbreak of that separation."

You can listen to the entire event here, via The White House. Audio starts after 44 mins 30 secs: