The U2 frontman and long-time AIDS activist met with the US vice-president in Germany. 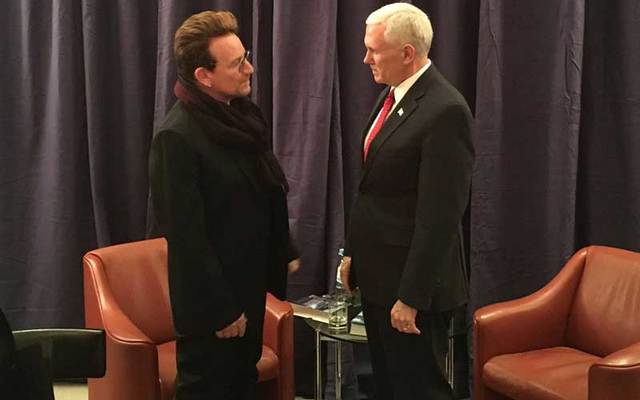 U2 frontman and long-time AIDS activist Bono has praised U.S. Vice-President Mike Pence for his support of an AIDS relief bill.

On Saturday, Bono met with Pence following the vice-president’s address at the Munich Security Conference in Germany, Pence’s first trip overseas as vice-president.

People magazine reports that the two men discussed the President’s Emergency Plan for AIDS Relief (PEPFAR) — a government initiative to provide treatment, testing, education, and counseling to those suffering with HIV/AIDS in Africa and other places.

The bill was first signed in 2003 under President George W. Bush. In 2008, PEPFAR was renewed under President Barack Obama. At the time, Pence, who was then an Indiana congressman, was an advocate for passing the bill.

“Twice on the House floor you defended that,” Bono told Pence. “That’s how we know you.”

“It was an extraordinary historic accomplishment and you played a leading role in carrying it forward,” Pence responded.

Bono has been raising awareness about the global HIV/AIDs epidemic for nearly 20 years. He helped form Product Red, which works with big brands such as Nike and Coca-Cola to help raise funds for AIDS charities and co-founded ONE Campaign, which aims to eradicate poverty and HIV/AIDS in Africa by encouraging Americans to contact elected officials and voice their opinions on the issue.

Although Pence advocated for passing PEPFAR, his critics claim he enabled an HIV outbreak in Indiana while serving as governor by defunding Planned Parenthood, which offered HIV testing. He also allegedly hesitated on pushing forward a needle exchange bill to fight passing infection, which led to a rise in HIV patients in Scott County. However, he did eventually approve a needle exchanges bill, which led to a reduction in the number of HIV cases.

“I appreciate the chance to get together with you for a minute,” Pence told Bono. “I heard you were in town.”