How can Ireland's leader present the traditional bowl of shamrock to The Donald without appearing to be acquiescing in his controversial immigration policies? 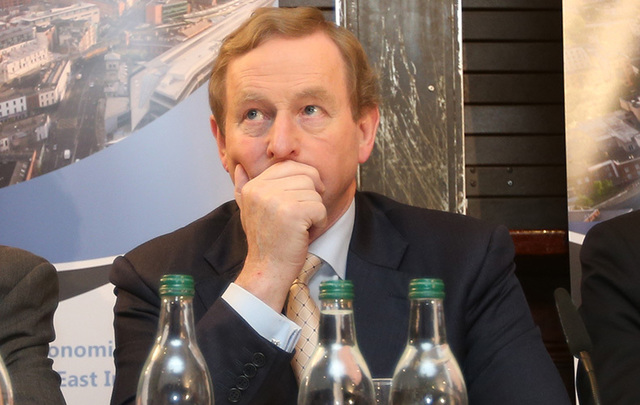 This year's St. Patrick's White House event on March 16 will make uncomfortable viewing for many of us. How can Taoiseach Enda Kenny present the traditional bowl of shamrock to The Donald without appearing to be acquiescing in his controversial immigration policies?  Especially with all those cameras flashing to record the moment.

As the younger members of my family like to say, awk-ward!

For the past month or more people on the liberal left in Ireland have been demanding a boycott.  Kenny should not go, they said. The shamrock tradition is all very well but the good name of Ireland on the world stage is far more important.  We cannot appear to be giving even tacit approval to Trump's odious actions on immigration.

When it became clear a couple of weeks ago that Kenny had no intention of missing his last St. Patrick's Day in the White House, this chorus of moral rectitude modified its tune.  If the taoiseach must go, then the very least he must do is state our strong disapproval to the president.

And he must do so in his public remarks when he hands over the green stuff. Claiming later that he did it in private will not be enough.

"A beautiful sunny morning you've organised for us too," says Fionnuala Kenny as she and Enda arrive for VP breakfast pic.twitter.com/tJghygyocV

All of which brings to mind the Skibbereen Eagle, the local paper in the small town in Co. Cork which gained international fame in 1898 when its editorial warned the czar of Russia that it knew all about his expansionist plans and was "keeping an eye on him." We don't know whether this had the czar quaking in his boots at the time, but it had many people at home and abroad shaking with laughter.

The notion that an admonition from Kenny, the leader of a very small country on the edge of Europe, could have a corrective influence on the president of the world's greatest superpower is equally fanciful.  Too many people here -- mainly from the President Michael D. Higgins school of propriety -- have delusions about our moral superiority, importance and influence.  The last thing Kenny should contemplate is to do a Skibbereen Eagle in this situation.

What he should do -- and probably will do -- is hand over the shamrock, smile, and simply wish President Trump and America a happy St. Patrick's Day and our very best for the future.  To do any more would not only be presumptuous and ridiculous, it would be stupid.

Bigly stupid, as The Donald might say.  It could be seriously counter-productive for the people Kenny is required to look out for before anyone else, the Irish, both in America and at home.

The Honor Guard is already out on this frigid morning prepping for the arrival of Ireland's Taoiseach Edna Kenny. #ireland #whitehouse pic.twitter.com/90aVjkiEOM

From what we know of Trump so far, he seems to be a man who takes offense easily but does not forgive or forget easily.  He is unlikely to take a public rebuke from Kenny kindly, no matter how gently that might be articulated.  He is likely to take any such admonition as an impertinent interference in U.S. domestic policy.

One can argue about the rights and wrongs of Trump's temporary ban on immigration from some Muslim-majority countries.  One can see it as unconstitutional, disproportionate, racist, xenophobic and all the rest of it.

Or one can see it as an extreme but understandable action, given America's recent experience.  There are cogent arguments on both sides.

What is beyond argument, however, is that it is President Trump's right to do what he judges necessary to keep America safe.  It is not up to the taoiseach, or the leader of any other country, to decide what is best for America on the issue of security or anything else.  Kenny needs to keep that in mind, no matter how loud the lefty-liberal chorus of disapproval rings in his ears.

On the wider matter of Trump's determination to enforce a stricter policy on immigration in general, Kenny needs to be even more careful since this is the area that potentially could impact the up to 50,000 Irish who are in the U.S. illegally and the many more Irish who may wish to make their lives in the U.S. in the future.

The sensible approach for Kenny in this area is not to criticize, but to ensure that the Irish will have the best chance of meeting the requirements of the impending stricter U.S. immigration regime.  To say that is not racist.  If the requirements for getting into the U.S. legally are the same for all races, citizens from all countries who want to live in America have to meet them in the same way.

It is the right of the U.S. (or any other country) to structure immigration policy in a way that best suits its own needs, as long as it does not give preference on a racial basis.  The way that is done may be more or less beneficial to the Irish, depending on the criteria used -- criteria such as fluency in English, education to the equivalent of high school diploma level, professional or technical skills, proven ability to run a business and create jobs, being law abiding and tax compliant, etc.  The point is that America chooses these criteria to suit itself, not to suit Ireland or any other country.

Some of these criteria already exist in U.S. immigration policy, although many people here who are denouncing Trump don't seem to know that the U.S. has long had such a merit system for employment-related immigration, in addition to family-based immigration, refugee protection and asylum and diversity visas.  Nor do they seem to be aware that there has always been numerical caps applied to each category.  Or that the rules are basically the same as they were under President Obama and for years before that.

What has changed is that Trump has declared his intention to enforce the rules more vigorously than his predecessors.  And that is what we Irish, like people from other countries, now have to accept and work with.

We start off with some advantages.  Irish people in general tend to meet many of the existing criteria.  To help the undocumented Irish in the U.S., our focus (and any quiet lobbying Kenny may do) should be on trying to get an acceptance that people who are in the U.S. illegally but who meet the criteria have a way of becoming legal as soon as possible.  Obviously, that should apply to everyone, not just the Irish.

A merit or points system exists in most developed countries, not just in Australia or in the U.K. (where after Brexit it will become much stricter).  The notion that countries should not have such systems to restrict immigration in a way that suits their own needs is idealistic nonsense.  And that applies just as much to the U.S., even if it was once "a nation of immigrants."

Nor is it true that such systems always penalize low-skilled, non-English speaking applicants.  It's not a question of choosing between farm workers and brain surgeons.  A country like the U.S. needs people at all levels in the economy.  It's a matter of regulating the intake so that it meets requirements.

One often hears the accusation that the Irish are blinkered to the point of being racist on this issue. What's the difference between an "illegal immigrant" and an "undocumented person" in the U.S.?  One is Mexican (or anyone else with brown skin), the other is Irish, the joke goes.

This double standard is evident too often in the Irish media.  But it is understandable that we use more sympathetic language when discussing our own; the bottom line is that all illegals in the U.S. face the same uncertainty and the Irish know that includes them.

Much has been said about Trump's determination to end sanctuary cities and the possibility of illegals who are working, paying taxes and contributing to their communities suddenly facing deportation because they ran a red light or inadvertently committed some other minor offense.  This may be scare mongering by those who will use everything they can to oppose Trump.

There is a long way to go on this and we don't yet know how the new policy will be applied at that level, if ever, although there is always the danger of being caught in the net when illegals with serious criminal records are being rounded up.

Trump's main strength, according to his supporters, is that he is a businessman who takes decisions that make practical, financial sense and that he has brought that skill with him into the White House.  On that basis alone, the eventual working out of his tougher immigration policy may be more sympathetic to illegals/undocumented who are contributing to their communities than is being predicted at this stage by some alarmists.

The huge furor that has blown up over Trump's immigration stance is too often more emotional than rational.  That is partly due to the widespread conflation of his ban on some Muslim-majority countries (which is security-related) and his build the wall and deport the criminal illegals policy (which is aimed at general immigration control).  The two are distinct and different and people here who conflate them as overall evidence of Trump's unacceptable attitude to immigration are not helping.

Since Kenny is at events in the U.S. all this week on his farewell tour, it is possible that he may make some veiled comment about the level of discomfort here with Trump's immigration policies before he gets to the White House.   But that is most unlikely and people here who are calling for him to disassociate himself -- and us -- from the Trump stance on immigration are not living in the real world.

The shamrock will be handed over with a smile as usual.  And that's how it should be.