Immigration is the most contentious issue of our time and splits people into radically opposing groups. 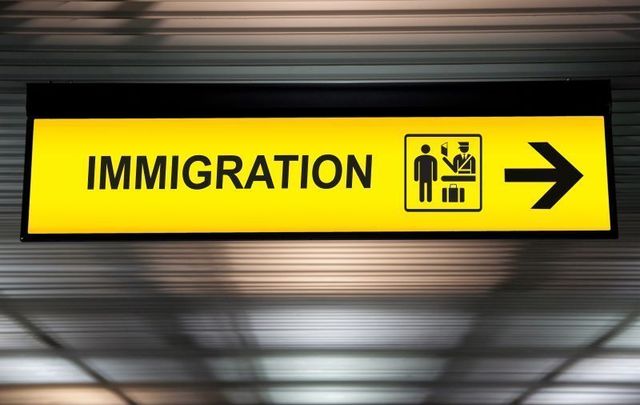 Is one country's immigration laws better than the other's? Getty Images

Is one country's approach to immigration better than the other's?

The case of Keith Byrne, the Irishman picked up by ICE in July who still faces possible deportation after 12 years in the U.S., may be resolved in the coming weeks. His plight got extensive coverage in the Irish media and a lot of sympathy when he was locked up for a couple of weeks before being given temporary release while the case is addressed. The outcome will be watched with great interest here.

The reason, of course, is that many people here have a brother or sister, or son or daughter, in a similar situation in the U.S. For one reason or another they are illegal—or "undocumented" if you prefer—most often because they have overstayed a visa.

There is also a lot of sympathy here for Byrne because, like so many of the illegal young Irish in the U.S., he has been a productive member of society there, working hard, raising a family, and becoming part of the community. As you probably know, he met and married an American woman with whom he has two children, and he is also helping to raise her child from an earlier relationship. He established his own painting and decorating business in Philadelphia and they bought a home there.

Keith Byrne with his wife and children

In all aspects, he appears to be a model U.S. citizen, except that he is not a citizen and that is the problem.  He entered the U.S. in 2007 on a 90-day travel visa and overstayed.

Despite being married soon after to a U.S. citizen he was unable to get permanent residency because he had a record, two minor fines for marijuana possession in Ireland years ago.

His crime, smoking a few joints when he was younger, was one that a great many people here were guilty of in their youth. The difference is that very few of us got caught, appeared before an unsympathetic judge, got fined and so ended up with a criminal record.

In Ireland, no prospective employer these days would pay much attention to this kind of misdemeanor. Nor would such a minor conviction be a noose around your neck forever. That nonsense ended here some years ago when new legislation meant that such minor convictions are now wiped off the record after a relatively short time.

It would not be true to say, however, that foreigners here seeking Irish citizenship or residency have not run into trouble like Byrne. Any misdemeanor that came to the attention of the gardai here has been enough to cause problems or a refusal for applicants. There were several cases some years ago where even getting a parking ticket was enough to prompt an automatic refusal of a request to stay here.

That reality raises the question of how much more reasonable or sensible the immigration rules and processes are in Ireland when compared with those in Donald Trump's America. The short answer to that question is, not much in most cases. And the very people here who get upset about cases like that of Byrne don't have much to say about that.

It's not just Ireland, of course. Immigration is the most contentious issue of our time and splits people into radically opposing groups.

At one end of the spectrum are those who favor a very relaxed approach on humanitarian grounds and are quick to label anyone who questions this as racist and xenophobic. At the opposite end are those who want a very tight, rules-based approach which enforces the law at all times without exception, even in cases that cry out for understanding and common sense.

In the middle are the majority of people who have learned that saying anything in public invites condemnation by the virtue signalers and so stay out of the debate.

Experience has shown, however, that many of those in the middle have a relatively conservative view on immigration. They believe there cannot be open borders and therefore there must be rules on who can get in and who can stay, rules that need to be enforced—and Ireland is no exception to this.

Read More: The heartbreaking pain of exile for Irish emigrants and the long journey home

So what exactly is the situation here? Are we better or worse than the U.S.?

Immigration into Ireland can be divided into three distinct groups. First and by far the most important are those who come from other EU countries, mainly countries in Eastern Europe like Poland.

The second category is immigrants from the rest of the world. They need a visa or permission to be here, either to work or to study or even to retire here.

The third category is refugees who seek asylum here, including those who are awaiting decisions and those who have been granted the right to stay—a group which attracts a lot of publicity even though the numbers are relatively low in comparison with the first two categories.

The pace of immigration into Ireland in the past few decades has been phenomenal, on a proportional basis far exceeding that into the U.S., for example.  The result is that around 17 percent of the Irish population today is made up of people who were born in other countries.

The scale is not out of line with a few other developed countries, but the speed at which this change has taken place is virtually unique.  Most of it has happened in little more than 20 years. Neither the U.S. nor Britain has had to deal with anything like this, despite immigration being such a huge issue for them.

As we said, most of this immigration here is in the first category—people coming from the EU, with many arriving from countries like Poland since 2004 when the EU was enlarged to include eight new countries in Eastern Europe. The attraction at the time was the then-booming Irish economy, although most of those who arrived chose to stay on even after the crash 10 years ago.

Not everyone here is happy about this, although there has been little vocal opposition to the rapid change from a virtually entirely "native" population to one in which 17 percent are from somewhere else. There is regular low-key complaining about the pressure on schools and hospitals and about the lack of promised resources to cope with the population growth. But for the most part, we have coped with the extraordinary pace of change very well and without much rancor.

That is just as well because even if we wanted to limit immigration from the rest of the EU we cannot do so without leaving the EU Single Market, membership of which is vital for our economy. We would have to do an Irexit, our own version of Brexit—and these days we are seeing how disastrous that can be.

The other point is that the statistics show that all the young immigrants from the EU make a positive contribution here. One economist here recently pointed out that four out of five of them are working, compared with three out of five of the native population. That's a lot of taxes being paid.

Also, the East Europeans do jobs the locals won't touch, in restaurants, on vegetable farms, etc. And because they are younger they are less of a drain on the health services, although their kids do need school places.

In the second category, immigrants from the rest of the world, we give out visas based on the needs of employers here. Around 15,000 a year are issued at the moment and many are for the IT sector, multi-language customer service centers, etc. They contribute to economic growth here, pay taxes, etc., but do add to the housing pressure especially in Dublin.  We would need less of them if we made computer skills a main subject in our schools and if we substituted European languages for compulsory Irish ... but that's another story!

In the final category, refugees and asylum seekers, the numbers are small because we are out on the edge of the continent and therefore less accessible to those trying to get into Europe from North Africa. In comparison with Greece or Italy, we have no problem.

In 2018, 3,673 people sought asylum in Ireland and 683 applications in the system were approved by the authorities. The number accepted is relatively low because most applicants are economic migrants rather than genuine refugees fleeing war and persecution.

Almost all the people who get here from war-torn Syria are accepted, for example. But almost all those coming from countries like Albania and Georgia (the two countries which were at the top of arrivals here in 2018) are rejected because these states are democracies and are relatively peaceful.

Our system is far from perfect, particularly because it still takes so long to process claims and we have a poor record in finding and expelling failed applicants. But it is working.

All told, Ireland does not have an immigration situation which causes much concern to local people and so far has not been used as a divisive issue in elections. This is in marked contrast to both the U.S. and the U.K.

Having said that, there is a price that is being paid for the change. The Irish identity and culture is now diluted in comparison with how it used to be before large scale immigration. Walking around Dublin these days is just like walking around London—so many people on the streets are not from here.

Of course, such commentary is not encouraged because it is seen as backward and negative—or even racist. But the truth is it is realism rather than racism.