Keith Byrne says US, Irish governments should be “embarrassed” about his deportation

Irish man Keith Byrne and his lawyer discuss the status of his potential deportation after he was detained and released by ICE. 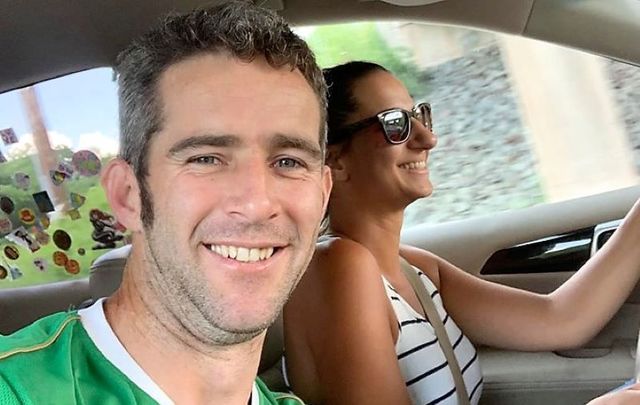 Keith and his wife Keren shortly after he was released from prison on July 25. Keith Byrne, Facebook

Keith Byrne, the Co Cork native who has been temporarily released from prison after he was detained by ICE in July, now says both the US and Irish governments should be "embarrassed" about his deportation proceedings.

Speaking with Drivetime 1 on RTE in Ireland on Wednesday, 37-year-old Byrne said he was “coming around slowly” and has some “post-traumatic stress” following his 15 days in Pike County Prison in Pennsylvania.

On the morning of July 10, Byrne was arrested by ICE soon after he left his suburban Philadelphia home to go to work.

“My world just stopped," Byrne said when he was stopped. “I was wondering, ‘What are you doing? Call my lawyer, because we’re still fighting.’”

Byrne said he was cuffed by his hands and feet as an ICE officer told him his “time was up.”

While Byrne says he was treated well in prison, he admitted that he “was definitely heartbroken and in shock.”

Byrne says he “absolutely" thought his American dream was over with the arrest. “As soon as I saw his badge, I thought, my world was finished.”

On July 25, the Irish man was released after 15 days in prison following an intervention from a judge. His release is only temporary as his legal team works to appeal his official deportation order.

Upon his release, Byrne posted to Facebook thanking his wife and supporters:

Read More: Northern Irish man deported from US says Keith Byrne should “take it on the chin”

"I love this country"

On Drivetime, Byrne said of the US: “I call this home. This is home, this is where I want to be for the rest of my life. I love this country, no question. I’ve been working very hard to keep doing the right thing.”

Byrne came to the US from Ireland in 2007 on a 90-day visa waiver program. Towards the end of his stay, he met American woman Keren and ultimately overstayed his visa.

He and Keren married in 2009 and went on to have two children together. (Keith is also stepfather to Keren's child from a previous relationship). The family recently purchased a home in the suburbs of Philadelphia and Byrne, a taxpayer with a clean criminal record, runs his own small house painting business.

Keith applied for his permanent residency after marrying Keren but was denied. “I believe it’s the marijuana charges that I had from Ireland that’s the big issue," he told the Irish radio program on Wednesday.

"We’ve been trying to correct it and find the right person to hear our arguments. It’s been going on for a number of years, we never gave up, we kept pursuing it, we were very persistent. So being picked up like a criminal was a big shock.”

Of the charges he incurred in his hometown of Fermoy, Co Cork, Byrne says: “They were fines. I showed up in court and paid a fine for a joint, one of them was a joint. Why should that ruin my future? I went to court and paid a small fine 14 years ago.”

He added: “People are out there doing serious crimes and they can go wherever they please. It’s just horrendous.”

Byrne said he admitted to the fines during his residency application: “Part of applying for the green card, there’s a question on the paperwork that asks if you’ve ever been arrested or fined.”

“I’m not going to lie and have that come back and haunt me in the future. We told the truth from day one.”

Next steps for Keith Byrne

Byrne’s lawyer Joe Hohenstein said on the radio program that his legal team is filing two court applications: one to remove Keith's deportation order, and another to challenge the denial of his permanent residence or green card.

Hohenstein said: “From the first time Keith came into my office, he wanted to make sure he was telling the truth and being straightforward. What we have right now is simply a legal disagreement about whether he is eligible to become a lawful, permanent resident.”

Asked whether Keith’s deportation was in relation to him overstaying his original visa or if it was from the fines he faced 14 years ago, Hohenstein explained: “The issue with the removal was connected to how he came in with the visa waiver, but the issue about whether he gets a permanent resident card is all about the problems with the arrest and the charges and the fines and things that happened before.”

When asked if he thinks he can keep Byrne out of prison after his 30-day temporary reprieve is up, Hohenstein said: “Without saying 100 percent for sure, I believe so."

"We’re in much more direct communication with immigration as opposed to what happened when Keith was picked up when communication didn’t happen and they [ICE] were following a new, more strict policy.”

Hohenstein added that in a previous part of the case, immigration officials said that Byrne “wasn’t somebody that they were interested in picking up” and his legal team was operating under that statement.

“Right now, because we’re talking to them [ICE], I’m confident that we can keep him out [of prison].”

Byrne said he is hoping to be back to work by the end of the month.

When asked if he’s thought about what he’ll do if he has to leave, Byrne said: “No, I give that no energy whatsoever because I don’t want to. I don’t want to think of something that may never happen. I will think of that when I’m on a plane.”

“Right now I’m thinking of how I can stay here and how I can continue.”