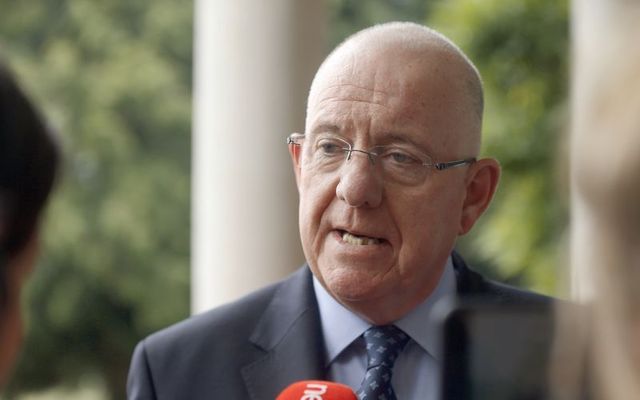 Reacting to the news that Irishman Keith Byrne was arrested in Pennsylvania by Immigration and Customs Enforcement (ICE) and awaits potential deportation in jail, Irish Justice Minister Charlie Flanagan has made a call for increased legal protection for Irish immigrants living without access to legal documents in America.

"There is an issue regarding the undocumented Irish across the United States, many of them stakeholders in terms of paying tax for many years, some of them settled with families in the States. I would hope an appropriate piece of legislation may be passed this year," Flanagan said in an interview with Today FM.

Byrne, who has his own house painting business, has been married to American woman Keren Byrne since 2009. The couple had two children together, and also raise Keren's teenage son from a previous relationship.

The Irish 37-year-old, a native of Fermoy in Co Cork, was arrested by ICE on July 10 when he was on his way to work in suburban Philadelphia. He is now being held in a Pike County prison in Pennsylvania as it looks likely that he will be deported to Ireland.

"He's been looking over his shoulder for the last 12 years and I don't want to see him over here struggling to get back to the States because that's where his family is, his home is, his work is," Keith's father Jim told the radio station.

"I want to see him coming back here for a holiday and going back to the States when that holiday is over."

Byrne's arrest happened as the news broke that ICE was set to raid 10 major US cities on Sunday, July 14:  Atlanta, Baltimore, Chicago, Denver, Houston, Los Angeles, Miami, New Orleans, New York, and San Francisco. The raids were supposedly targeting some 2,000 immigrants who had already been served deportation orders, but officials acknowledged that other "collateral" deportations could happen.

In February 2017, Flanagan spent three days on Capitol Hill meeting with President Trump, his advisors, and other politicians, pressing Ireland’s case for securing legal status for the estimated 50,000 undocumented Irish in the U.S.

The visit followed Trump's since stayed executive order banning entry into the US for people from Iraq, Syria, Iran, Sudan, Libya, Somalia and Yemen.

At that time, he said:  “While U.S. immigration policy is a matter for the U.S. authorities, it is clear that the most recent decisions could have far-reaching implications - both on humanitarian grounds and on relations between the U.S. and the global Muslim community.

“Accordingly, I share the concerns of other EU partners regarding this most recent development.

“Many people are feeling great concern about these changes including some Irish citizens in the United States."

Do you think undocumented Irish in the US should get protective legislation? What about other undocumented immigrants? Share your thoughts in the comment section or on social media.