Brian and Ophelia - a tale of two storms

Impression the media seemed to be striving to give was that Ophelia was comparable to events in the Caribbean and Florida, which was simply not true. 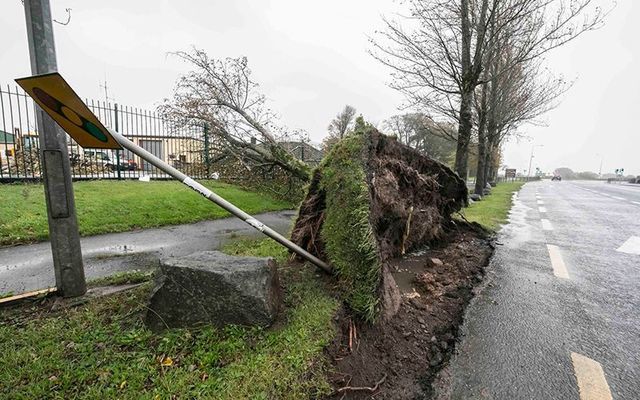 A downed tree in Co. Waterford after Ophelia. RollingNews

The woman in front of me at the counter in my local convenience store on Tuesday morning last week had three kids with her.  A struggling toddler was balanced on her hip, another one was pulling on her free hand and an older one was trying to demolish a stack of Halloween pumpkins a few steps away.

"I'll have an Americano and a Valium," she told the sales assistant, only half joking.

I had just come from my local cafe which at that time is usually full of senior citizens sipping coffee, but that morning had been inundated with equally harassed young parents with kids in tow.  When I told her this she rolled her eyes.

After Hurricane Ophelia over the previous two days, it was a beautiful, calm, sunny morning in Dublin and the public playground opposite the cafe was full of kids and parents, very unusual on a weekday.  "I'm heading down there now," she said wearily.  "I had to take the day off work.  It's mad, they should all be in school."

As you may know, Dublin and the East Coast escaped most of the damage caused by Hurricane Ophelia, which had been downgraded to a tropical storm just before it hit Ireland the weekend before last.

On that Sunday afternoon in Dublin it was very windy but otherwise pleasant outside.  That night and Monday were the worst as the eye of the storm barreled up the west coast.  By Tuesday morning it was all over and so balmy it was difficult to believe it had ever happened.

But Ophelia had been powerful enough to bring down hundreds of trees and cause damage to some buildings, mainly in the south and west of the country, and there were three fatalities.  Hundreds of thousands of people had lost power and 10 days later around 15,000 still have no power, and some still have no water since their local supply schemes run on electricity.

But in Dublin and on the eastern side of the country, the damage had been minimal.  On Tuesday morning, with the wind gone and the sun shining, parents all over the city were complaining that keeping the schools closed for another day was ridiculous.  It meant that hundreds of thousands of people had to take another day off work.

It was the same with public transport, with many buses and commuter trains still not running the morning after the storm had passed.  Frustrated commuters complained that there was no reason for the capital to be forced to a standstill.

"It's what we do here," the mom with the three kids told me that morning.  "We over-react to things like this.  There's no reason why the schools in Dublin should be closed today.  Look at it -- it's a beautiful day.  It's all this health and safety stuff that officials go on with to cover themselves."

As if Ophelia was not enough, we had Storm Brian this past weekend.  Not nearly as powerful as its sister a week earlier, this one was still strong enough to bring down more already weakened trees, cause some flooding in low lying coastal areas and further delay the restoration of power for thousands of people.  Two men died in separate accidents.

But again Dublin was lucky and did not seem to be badly affected.  Overall, we seem to have got through both storms without damage on a really catastrophic scale, although the cost nationwide has been put at hundreds of millions.

Having said that, any storm that causes fatalities is serious, a tragedy for the families involved.  The three lives lost during Ophelia were all a result of accidents caused by falling trees or heavy branches, and the two men who died during Storm Brian had accidents while carrying out roof repairs.

As the country resumed the clean up this week after Storm Brian had passed, more voices were heard in Dublin complaining that there had been an over-reaction.  The entire country had been put on a red weather alert for the arrival of Ophelia, the highest warning level.

All schools were closed, school buses were withdrawn, public transport was severely curtailed and businesses were advised to give people the day off on the Monday.  Even with the sun shining the schools remained shut on Tuesday.

Many people in Dublin, particularly the parents forced to take another day off work because their kids were off school, felt that it was a bit over the top.  Why had the entire country been told to go into lockdown?  Why was it not possible to give a more nuanced weather warning for Dublin and the East Coast, since it was not nearly as bad as the rest of the country?

Their frustration is understandable.  But equally understandable was the attitude of the authorities here who were determined to err on the side of extreme caution.  Better to be too cautious than not cautious enough and then be blamed later.

And in fairness to the authorities, we are not used to such severe weather events here.  As far as Ireland is concerned Atlantic hurricanes are supposed to go in the other direction.  We expect them to make landfall in the Caribbean and Florida, not in Cork and Kerry.

The result of this inexperience was that in the run up to Ophelia and during the storm the situation here was presented in an almost apocalyptic manner both by our national emergency committee, which held briefings every few hours, and by the media, which has an interest in hyping up events to make them as dramatic as possible.

So we had reporters and camera crews on beaches and pier ends in the most exposed coastal areas, shouting over the wind and drenched in rain and spray.   Minor flooding in some areas was made to look like inland seas.

Dramatic pictures of the same few large trees which had fallen across roads or on to buildings were recycled on successive TV news programs.  And it was the same with video of a few sheets of roofing blown off a building somewhere and captured on somebody's phone.

The impression the media seemed to be striving to give was that Ophelia was comparable to recent hurricane events in the Caribbean and Florida, which was simply not true.  That is not to minimize the misery of the many people here who were without power for days on end and, even worse, those who also had no water.  But this was nothing like the aftermath in Puerto Rico.

The normally sure footed new Taoiseach Leo Varadkar looked a bit stupid when he donned a hard hat and high viz jacket to visit some places in Kildare with fallen trees.  He said he wanted to view the damage for himself.  But it looked very much like a hammy attempt to get media coverage of him looking concerned.

The real idiots of Ophelia, however, were the clowns who decided to face down the near hurricane by jumping off piers in Galway to go swimming and the windsurfers who went to sea off Co. Louth on the Monday morning as the storm approached.  Both risked not only their own lives but also those of the rescue services who would be sent after them if they got into trouble.

Both incidents provoked outrage here.  The swimmers were definitely moronic, given the real danger of being thrown back against the piers and the rocks in the huge Atlantic waves that were hitting the Galway coast.

For the windsurfers in the sea off Louth, the reality was a bit more nuanced since they were experienced extreme sports fans.  However, an anxious member of the public walking the beach who had seen them vanish from view rang the emergency services and a helicopter and lifeboat were sent out, which put those crews in danger.

Here's footage of some windsurfers off Dublin:

In fact the windsurfers came back in by themselves before the full force of the storm hit and did not need to be rescued.  But whether they should have been out there at all is arguable.  Some of the angry callers to radio stations here after the incident demanded that they be given the bill for the rescue services and that observation of a code red warning in the future to stay off water would be backed up by the law.

That said, there are YouTube videos up of windsurfers in the enclosed and relatively safe Malahide Estuary bay on the North Side of Dublin that morning which are worth a look.

As always here, both storms brought out the community spirit that is such a big part of Irish life, with neighbors helping each other and volunteers out with chainsaws clearing roads and tractors delivering sandbags.

And having been through this near hurricane we will know a lot more when the next one arrives.  Which everyone hopes will not be any time soon!