In 1839 three hundred people died, 25 percent of houses in Dublin City were destroyed, and 42 ships were sunk in category four to five winds. 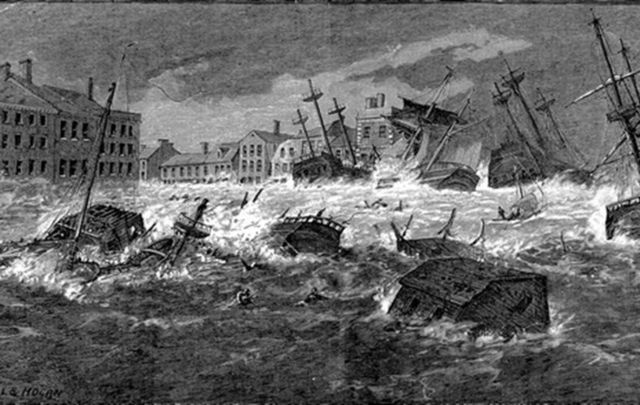 An illustration of houses and ships in Dublin being tossed around by the Big Wind of 1839. NLI

Compared to the “Night of the Big Wind” on January 6, 1839, Hurricane Ophelia which slammed Ireland this week was a mere tiddler.

The Big Wind was the worst recorded storm in history, a Category 4 or 5 hurricane which came out of the blue and caused massive casualties. Up to 300 people died, 25 percent of the flimsy houses in Dublin City were destroyed, and 42 ships were sunk.

The devastation was everywhere. The storm was general throughout Ireland, hitting isolated areas as well as towns and cities.  No one was spared.

Prior to the storm, the weather was very odd for early January.  There was a heavy snowstorm on January 5 which was followed by a balmy sunny day, almost unheard of for that time of year. A reading of 75-degrees Fahrenheit was taken. The people could not believe their luck as the snow faded quicker than a New York minute.

An eerie calm settled and people in the west of Ireland reported a strange phenomenon: Their voices could be heard at a great distance, cutting through the stillness.

Read more: In the wake of Storm Ophelia we look at the worst storms in Ireland’s history

By mid-afternoon the sun abruptly disappeared and the storm clouds gathered.  Still, there was no expectation of what was to come.

Suddenly, out of the storm-lashed sea in the west of Ireland a black squall approached, massive in size with roaring winds. It was so dark people had difficulty seeing each other.

Terrifying illustration of men and horses being tossed by waves.

The first news of bad weather was reported in Co. Mayo when the steeple at the Church of Ireland in Castlebar was blown down.

As the evening wore on, the winds began to howl louder and soon reached hurricane force.

The arrival of the hurricane force winds would never be forgotten by those who witnessed it. People had to sign to each other, so loud was the wind.

Animals in the field were lifted up like dolls and deposited several fields away. Farm implements such as forks and shovels and buckets were gyrating in the air like a mad magician was controlling them.

The Dublin Evening Post described the storm arrival as the following: “About half-past 10 it rose into a high gale, which continued to increase in fury until after midnight when it blew a most fearful and destructive tempest.”

The Dublin Evening Mail called Dublin a “sacked city … houses burning, others unroofed, as if by storm of shot and shell; a few leveled with the ground, with all their furniture within; while the rattling of engines, cries of firemen, and labors of the military, present the very aspect and mimicry of real war.”

The Irish Times noted that FE Dixon recorded that 38 houses in Dublin were blown down, 364 were partly demolished or unroofed, and an astonishing 4,846 were partly unroofed.  Further south, the mighty Shannon burst its banks and flooded for miles around.

The historic legacy of the storm is such that it is still referred to in the press today, and terrifying stories of that night have been ingrained in the psyche.

Many thought the world was at an end and prayed for relief.  The storm vanished, never to come again. But the folk memory has remained.

Here's some audio from RTE's The History Show on the mammoth storm: