Brexit fuels the return of New IRA in Northern Ireland

The car bomb planted by the Real IRA in Derry shows clearly that violence in Northern Ireland has not gone away. 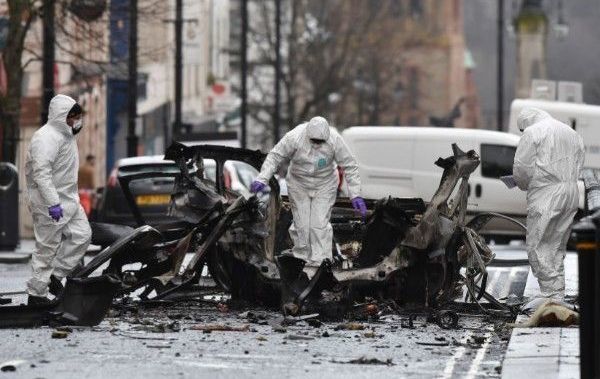 The actions of the New IRA in setting off a car bomb in Derry on Saturday night shows clearly that violence in Northern Ireland has not gone away.

It was probably inevitable given the power vacuum that exists after the suspension of the Northern Ireland assembly and the cross-party government that militants at some point would try to grab center stage.

The car bomb may be an isolated incident, or perhaps not. On Monday, The Guardian reported: “Masked men have hijacked two vehicles in separate incidents in Derry in Northern Ireland, causing fresh security alerts and disruption two days after a car bomb exploded outside the city’s courthouse.”

So there is mischief afoot. Throw Brexit in the mix and you suddenly have a very flammable Molotov cocktail.

Brexit has reawakened the old prejudices and suspicion between the Irish and the English and given an opening to the dissidents whose only agenda is to destroy the peace process.

In that respect, they march arm in arm with Boris Johnson and his ilk who feel no remorse whatever about re-imposing a hard border and fueling dissident sympathies if it suits their naked political ambitions.

George Mitchell warned long ago that implementing peace and the Good Friday Agreement would be a lot more difficult than signing the Agreement itself.

We should have taken more notice of his words. However,  the ancient war and its advocates seemed to fade into the past. Somehow the tensions had all become submerged with acts like the visits by the Queen to Ireland and the historic state visit of the Irish president to Britain.

A new era had dawned we had all come to believe, the ending of a historical arc that stretched from the 12th Century to the modern day.

Alas, it looks like our optimism has been misplaced. The Brexit juggernaut threatens to throw the relationship into chaos again with dire consequences for Northern Ireland.

Consider this. Up to 70 percent of English supporters of Brexit would happily accept restoration of the Irish border if the government named it as the price of a hard Brexit.

In other words, they consider the Paddy problem a mere flyspeck in comparison to tumbling out of Europe and getting away from the Frogs and Krauts.

Not only that, Prime Minister Theresa May has even put about the notion of renegotiating the Good Friday Accord in order to find a way around the border issue and renegotiate it.

The Good Friday Agreement is an international treaty, as binding in its commitment as the Treaty of Rome in 1957 which created the constitutional underpinning of the European Union and which governs the departure of Britain from the EU down to the present day.

What the Irish see also is May’s failure to live up to Britain’s solemn promise of implementing the Good Friday Agreement, an agreement registered with the UN as inviolable.

The reason she would not do so is to placate the ten unionist votes she so desperately needs she thinks to pass a version of Brexit through the House of Commons.

Never mind that nothing will satisfy her hard right and unionist constituency other than a hard Brexit and a good old fashioned border in Ireland. The Real IRA must be licking their lips.