Derry police believe dissident republican group the New IRA was behind the car bomb explosion outside the courthouse on Bishop Street on Saturday evening. 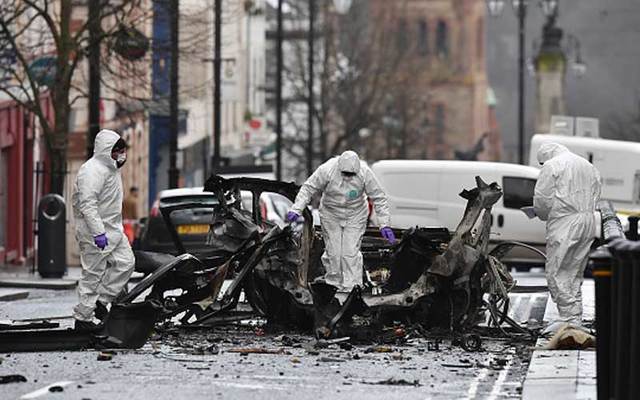 Forensic officer inspect the remains of the vehicle used as a car bomb outside the court house in Derry on Saturday, January 20. Charles McQuillan/Getty Images

“Our primary line of inquiry is that the New IRA was responsible,” said Assistant Chief Constable Mark Hamilton on Sunday.

He said it was a “significant attempt to kill.”

ACC Hamilton said a “crude and unstable device” was placed inside a hijacked pizza delivery vehicle, which was then driven half a mile through the city, The Irish Times reports.

The device exploded shortly after 8pm. No one was injured in the blast.

Two men in their 20s have since been arrested.

PSNI has condemned the device as “unbelievably reckless,” saying if would have certainly killed someone if they had been near the device when it exploded.

According to ACC Hamilton, the pizza delivery driver had been called to an address in Quarry Street in the Brandywell area of Derry. There he was approached by two masked, armed men.

“He was taken to the back garden of a house and held there while possibly a third male was also involved in removing the car from the scene.

“At some point then a bomb was put into the car and then that car was moved by, we believed by a single person, up to Bishop Street.”

The vehicle was left outside the courthouse at about 7.23pm, and the driver ran off in the direction of the Bogside.

A car bomb exploded outside the Derry courthouse at 8:15pm on Saturday evening. Credit: PSNI

Shortly after the vehicle was abandoned, The Samaritans in the West Midlands received a call warning of the bomb. West Midlands police were notified, followed by the PSNI.

A patrol had spotted the car and had already begun to evacuate the area before the bomb detonated at 8:09pm.

Police had to cut the gates at the back of a youth club to allow 150 people to escape the building, which was located directly opposite the bomb.

“They got everybody away just in time,” said ACC Hamilton.

“At the time the place was packed with people, there was a hotel we had to evacuate and local bars, so there was a huge impact on the local community and a huge risk to people just going about their business and enjoying themselves,” he said.

“The lives that were in danger started in the community where this bomb was stuck in this car. Anybody that builds a bomb in the community sticks it in a car and then drives it half a mile through the city is placing lots of people’s lives in danger, very clearly.

“Secondly, anybody who was near this device when it was abandoned was at risk, as were our local community police officers who behaved heroically - along with those in the community - to clear the area, they were at risk.

“The people who planted this bomb failed to hurt anyone and for that we are grateful but of course, lives were at risk.”

He added that this was “obviously a more significant attack than in recent times.”

“All dissident groups in Northern Ireland are small groups, and it’s important for everyone to remember that they have very little community support either in this city or beyond.”

He said he was confident that police were “constantly disrupting” dissident republican activity.

“Most people in the city don’t want anything to do with it, so on days like today, whilst we’re all a bit downhearted that it has happened, we should take encouragement from the support that the local community and I don’t think we should overestimate the ability of these people.

“At a time like this, and we’re seeing it in the city at the moment, there is a call for unity, and I’m confident we’re all standing together.”

No one has yet claimed responsibility for the attack.

The Irish Times reports that Saoradh, which describes itself as a revolutionary Irish Republican Party, said in a statement that the explosion was “believed to have been a large mine attack by Republican revolutionaries” and linked the attack to the 100th anniversary of the Soloheadbeg ambush, which marked the beginning of the War of Independence.

In Derry, Bishop Street remains cordoned off and is expected to remain closed until late Monday. The police are continuing to investigate the attack.