We are not going back to the British border in Ireland 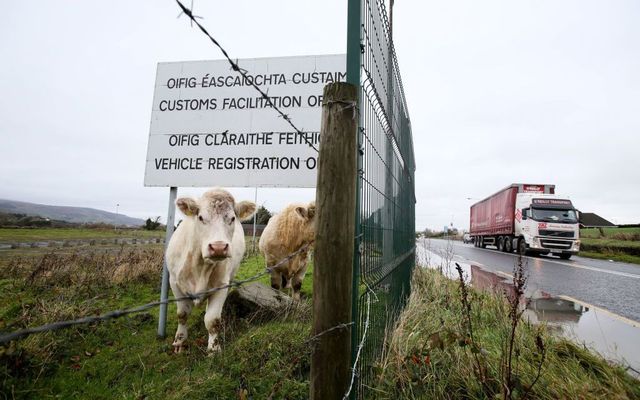 Cows stand under a sign got a disused Irish border vehicle registration and customs facilitation office outside Dundalk, Ireland on November 14, 2018, near the Northern Irish border. PAUL FAITH/AFP/Getty Images

Imagine if you had to slow your car down, then stop, then pass over military ramps and devices aimed at crippling your vehicle, then produce your ID and explain your movements to an often hostile soldier from another country (whilst you are still in your own) and you’ll start to understand what the British border in Ireland felt like.

And imagine having to go through this elaborate and often frightening process every day. Sometimes multiple times a day. Imagine how intimidating it could be with all the machine guns pointing at you at the various checkpoints.

And all you’re doing is what most people do in their daily lives: visiting friends and relations, going to the shops or the movies our out for a dance. Papers please, every time?

“Where are you going, sir?” the young British soldier would ask my father.

“Well, I was in Derry and this is the road to Donegal. So Donegal.”

Most of those British soldiers were barely out of their teens.

And not a thing would change on either side: the same rain was falling on the same dark fields, the same wind was blowing, not even the accents had changed. What did anyone think would be different on either side?

The British border in Ireland was a howling absurdity. It was surreal and pointless and enraging. It taught me that Northern Ireland has no threshold for surrealism. It taught me there were no adults to be found there and that no one was taking charge.

The daily exchange was the most maddening: having to explain to someone from a different country what you were doing (and where you were going) in your own. And just years of this. Decades.

The message to us all in the border counties back then was: you’re just collateral damage in a wider redistricting. Terribly sorry, old chap. And that’s the DUP's message of Brexit to the border communities again in 2019. And I don’t think they or the Tories truly understand the level of popular resistance they are about to encounter.

To hear the DUP leader Arlene Foster's comments this week that “as someone who lived through the troubles we never had a hard border in Ireland,” is enraging because it gaslights the lived experience of tens of thousands of us, it tells us we just imagined all those military security bunkers manned by trigger happy British soldiers, it pats us patronizingly on the head and assures us we dreamed it.

So what did she think all those huge concrete guard towers were for? All the barbed wire and surveillance posts and electronic equipment and search garages and military grade tripwires and the hovering helicopters? The 20,000 British soldiers? Were they there on holiday? Foster hails from Fermanagh, a border county, so what did she think all that was if not a hard border?

Since Brexit cannot and will not deliver the mythical golden future they voted for, is the DUP being forced to rewrite the past now too? It is staggering to hear the leader of unionism deny there was a hard border during the Troubles. But this statement was not crafted for Northern Ireland (which voted overwhelmingly to remain in the European Union, and who Foster does not speak for).

This statement was not crafted to appease the business community of Northern Ireland, who are looking on with growing horror as Foster pursues a political outcome that is diametrically opposed to their economic wishes.

This statement was crafted to appease a minority within unionism and with the Tory party who have always believed that their desired outcome overrules the desires of all others. It's music to their ears and a klaxon to the rest of us.

Because the truth is there has almost always been a hard border around Northern Ireland. There was a border in the 1940s and '50s and '60s, long before they joined the EU. There were customs posts too and searches. Smuggling butter and eggs across that border is part of the lore of the border counties, deeply ingrained in the folk memory. So yes, there was a hard border.

But we are not going back to it. We are not getting into the DUP’s DeLorean time machine. We don’t want to live in a supremacist jurisdiction where one party overrules all others in perpetuity.