Taoiseach Leo Varadkar warns that a hard Brexit deal could complicate international flights for the UK, stating that if a border can be drawn through waters, airspace will also be considered. 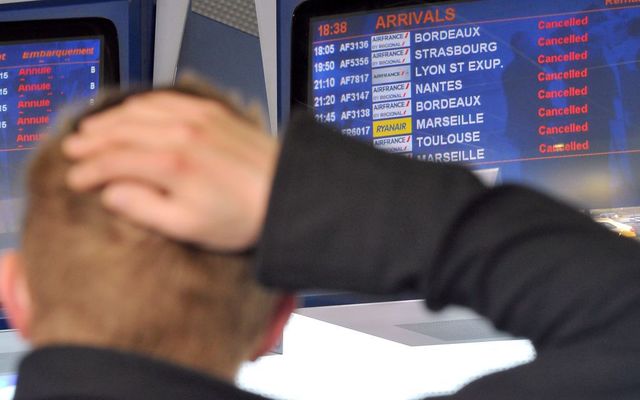 What will happen with airspace after Brexit? PHILIPPE HUGUEN/AFP/Getty Images

As British Prime Minister Theresa May prepares to visit the Northern Ireland border, the Irish government stands its ground and prepares for no deal on Brexit.

Irish Taoiseach (Prime Minister) Leo Varadkar has sent a warning to the UK that they will need to consider the effect a hard Brexit would have on their international flights once the UK leaves the EU. A hard Brexit deal would see the re-establishment of a hard border between Northern Ireland and the Republic and drastically alter movement, travel and business between the two.

After the British parliament on Monday night narrowly passed an amendment to the customs bill that would make it illegal to create any kind of border in the Irish Sea that would leave Northern Ireland as part of a separate territory to the EU, the Irish government is now stepping up a plan fora no-deal Brexit and suggesting that the Irish Sea may not be the only point at which the UK may be forced to rethink their future relationship with Ireland.

“The situation at the moment is that the United Kingdom is part of the single European sky, and if they leave the EU they are not and that does mean that if there was a no deal hard Brexit next March the planes would not fly and Britain would be an island in many ways and that is something that they need to think about.

“If they want their planes to fly over our skies, they would need to take that into account,” the Taoiseach said during a press briefing after the Irish Cabinet met for discussions at an away-day in Co. Kerry.

“You can’t have your cake and eat it. You can’t take back your waters and then expect to take back other people’s sky.”

“If they want their planes to fly over our skies, they would need to take that into account. You can’t have your cake and eat it. You can’t take back your waters and then expect to take back other people’s sky.” pic.twitter.com/9wS6sREAlL

British Prime Minister Theresa May also addressed the issues of flights and airspace after Brexit on Wednesday, ahead of her plans to visit Northern Ireland and the border on Friday. When questioned by Transport Select Committee chairwoman Lilian Greenwood on whether UK holidaymakers would be able to book flights for next year, May said that the UK wants to participate in the European Aviation Safety Agency (Easa) after Brexit as a non-EU member state.

“We believe that what is in this White Paper is the right package to put forward,” May stated, but with the prospect of no deal on Brexit being reached an increasing threat, she added that the Department for Transport was “looking at what would happen in a no deal scenario and what arrangements would need to be in place.”

“It is in everybody's interests to ensure that the planes can still fly,” May added.

Read more: We can’t ignore the need for the elusive Brexit solution

Earlier, during the Prime Minister’s last questions of the term and after the resignation speech of former British Foreign Affairs Secretary Boris Johnson - in which he claimed the PM had allowed the Irish border issues to dominated the leaving discussions - May had stated that it did not automatically follow that a hard border would follow on the island of Ireland if no Brexit deal was reached. She also stated that explainers on how to prepare for a no-deal Brexit will be sent out to families and businesses in August or September.

Read my personal statement to the House of Commons this afternoon. pic.twitter.com/Zy6klFWQsr

Ireland is also beginning to prepare with Taoiseach Varadkar on Wednesday stating, “We can’t make assumptions that the withdrawal agreement will get through Westminster.”

“It’s not evident, or not obvious, that the government of Britain has the majority for any form of Brexit, quite frankly.”

.@theresa_may says 70 "technical notices" for businesses and households will be published in Aug and Sept setting out how we can all prepare for a no-deal Brexit (should that be what happens). Yikes

While Monday’s amendment saw Prime Minister May claiming, “I’ve been clear we will not accept the imposition of any border down the Irish Sea and we will preserve the integrity of the UK’s internal market and Northern Ireland’s place within it,” Irish Tánaiste (Deputy Prime Minister) has claimed that the Good Friday/Belfast Agreement - signed as a peace deal in Northern Ireland in 1998 - could trump any UK law. The Agreement gives voters the right to self-determination and has the status of an international treaty, which could mean Northern Ireland could yet be a backstop in the Brexit process.