British bullying on Brexit border issue may reignite The Troubles

Jacob Rees-Mogg’s comments a grim reminder of how ignorant many British politicians remain about Irish affairs and Northern Ireland’s hard-won and much-relished peace. 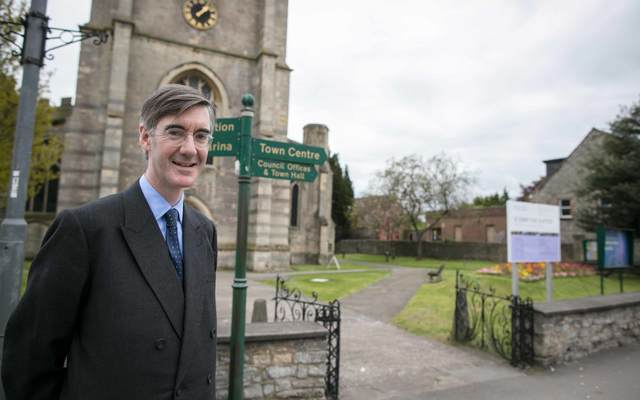 Conservative MP Jacob Rees-Mogg poses for a photograph near his constituency office in Keynsham on May 4, 2018, in North East Somerset, United Kingdom. Matt Cardy/Getty

Jacob Rees-Mogg’s comments a grim reminder of how ignorant many British politicians remain about Irish affairs and Northern Ireland’s hard-won and much-relished peace.

The English Conservative politician Jacob Rees-Mogg was at it again at the weekend, stoking up the Brexit flames with seemingly little regard for the terrible history of conflict which blighted so many lives right up to the Good Friday Agreement of 1998.

Rees-Mogg – one of the most prominent Brexiteers in Britain – seemed to completely discount the huge fears of a return to the dark old days and the divisions which blighted so many lives.

The MP (Member of Parliament) for north-east Somerset has spent very little time in Ireland and yet claimed that border inspections could be reintroduced “just like during the Troubles” in a video which has caused outrage across Ireland.

He talked of “continuing historic arrangements” from The Troubles as though anyone could countenance a return to the years of conflict when 3,500 people, of whom 52% were civilians, lost their lives.

Jacob Rees-Mogg suggests that after Brexit, people crossing the Irish border should be subject to 'inspections, just like during The Troubles'. pic.twitter.com/pEnBNBBasU

“It would be possible to continue with historic arrangements to ensure there wasn’t a great loophole in the way people could get into the UK to leave us in just as bad a position as we are in,” said Rees-Mogg.

“There would be our ability, as we had during the Troubles, to have people inspected. It’s not a border that everyone has to go through every day. But of course, for security reasons during the Troubles we kept a very close eye on the border to try stop gun running and things like that.”

His remarks caused alarm that a Brexiteer from Britain could be so quick to dismiss concerns over the impact a hard border could have on Irish lives and businesses.

The Irish Minister for Foreign Affairs, Simon Coveney, described the comments as “ill-informed,” especially when there is no sign of a breakthrough in negotiations between the UK and EU before Britain leaves in March of next year.

At a time when bluster from British politicians over Brexit and the Irish border is threatening the Irish peace process, a punk rock concert in Belfast at the weekend reminded many of us of how much progress Ireland has made over the past 20 years.

Thank you Germany & @HeikoMaas for your continued support and your strong comments today: “We have to avoid a hard border, it is a pivotal issue. Any insecurity or deterioration in relation to Northern Ireland must not happen as a consequence of #Brexit.” 🇩🇪 🇮🇪 🇪🇺 pic.twitter.com/WPeLc84Wzz

It might sound strange or bizarre, but for the first time in my life, I found myself wishing that I could bring an ultra-Conservative British politician to a punk rock concert in the heart of the city.

Perhaps the music might not have appealed to his more refined tastes, but the 41st-anniversary concert by local heroes Stiff Little Fingers might have taught Jacob Rees-Mogg MP a thing or two about how much the city of Belfast and the island of Ireland have changed.

To threaten that hard-won peace, to even countenance a return to the language and the atmosphere which ignited what became known as ‘The Troubles’, is alarming to many older Irish people.

Had Rees-Mogg attended the punk rock gig, he might have learned a thing or two about the emotions of ordinary people who remember terrible times and their desire to live full, happy lives in a normal, peaceful society.

Read more: May 22, 1998 the day the Belfast Agreement became the people's agreement

Peace, prosperity, and compromise were not easily won.

At the end of a brilliant weekend, involving a cross-border trip and mixing with people from all sorts of backgrounds, Rees-Mogg managed to give many Irish people a grim reminder of how ignorant or oblivious many British politicians remain regarding Irish affairs.

For many people on both sides of the Irish border, the casual way in which pro-Brexit Tories dismiss or ignore their concerns over the prospect of a return to the dark old days is shocking.

Today's aggressive comments by Messrs Varadkar and Barnier show why we are right to be leaving the mafia-like European Union.

Ahead of the 2016 poll which sent shock waves throughout the European Union, people living in border communities could not help feeling that they were on the margins – not just of Europe, but of those in the corridors of power in London.

The status of what used to be a militarized interface between Northern Ireland and the Republic of Ireland, complete with horrible lookout towers and armed soldiers stopping and searching cars, rarely seemed to arise during the Brexit referendum campaign.

Two decades of peace seem to have allowed complacent people to forget the deep divisions which blighted Irish society and the pain which survivors and the families of victims, on all sides, have to live with every day.

The welfare of thousands of residents and businesses who cross the border each day still seems like an afterthought as Brexit talks between the British Government and the European Union appear to be making no progress.

They cannot help feeling that jingoistic Tories, in their haste to break free from their European ‘masters,’ never gave a second thought to those border communities as they clambered for the exit door.

If, as the saying goes, those who cannot remember the past are condemned to repeat it, those who are rushing to leave the EU seem to be oblivious to the dangers of re-igniting the flames of what became known as ‘The Troubles.’

How ironic it would be if those nationalistic Brits who campaigned so vigorously to leave the EU were to find that their actions were to lead to the break-up of the United Kingdom or a return to violence in Northern Ireland.

People seem to forget that 55.8% of Northern Ireland voters wanted to remain in the EU, just as 62% of Scottish voters opted to remain. Those voters hardly gave a ringing endorsement to the Tory Brexiteers who now seem to be on course to crash out of the European Union.

Conservative MP Jacob Rees-Mogg poses for a photograph below a portrait of Winston Churchill in his constituency office in Keynsham on May 4, 2018 in North East Somerset, United Kingdom. Image: Matt Cardy/Getty Images

Those voters feel alienated at a time when there has been no functioning Government in Northern Ireland since January of last year. Talk of a return to a hard border and militarized checkpoints is opening up old wounds.

A ‘no deal’ Brexit could have a disastrous impact on relations between Britain and Ireland, and particularly on the lives of ordinary people in Northern Ireland who have benefitted so much from 20 years of peace.

If Rees-Mogg wanted a snapshot of how much Northern Ireland has changed, he really should have joined a few thousand aging punk rockers at an outdoor concert at the Custom House Quay in the heart of Belfast on Saturday night.

Stiff Little Fingers are local heroes, born out of ‘The Troubles’ and the punk rock movement of the late 1970s. Their popularity transcends the generations.

Their lead singer, Jake Burns, became a spokesman for a generation whose lives were blighted by strife, violence, and sectarian tensions in the 1970s and 1980s.

They grew up in a Northern Ireland in which people were too afraid to go out at night, the streets were deserted after 7 pm, and yet punk music played a significant part in bringing two bitterly divided communities together.

Thanks to punk music, people did not care if you were nationalist or unionist, Catholic or Protestant, even though there was so much tension in the air.

Few could have imagined in their younger days that SLF, as they became known, would go on to celebrate more than 40 years in the music business with a massive outdoor show in front of fans who had traveled from across the UK and Ireland.

Thanks to the peace process, Belfast was buzzing on Saturday night. Our little group from Galway mixed brilliantly with a group of friends from the north of England in a way which would have been unthinkable three decades ago.

It was amazing to look around and see the emotion on the faces, and passion in the voices, of Northern Irish music fans now in their forties, fifties, and sixties, as the band belted out old hits like "Suspect Device," "Barbed Wire Love" and "Wasted Life" which reminded us of far more troubled younger lives.

Beside me, young and old rockers literally had tears in their eyes as they sang along to an old hit, "Gotta Get Away," which explored the frustrations and horrors of being young in such a bitterly divided and violent land.

The whole place erupted when the band returned for an encore which featured "Alternative Ulster," the band’s clarion call for a normal life in a land blighted by sectarianism, division, and the frustration of broken and wounded lives.

The huge roar which greeted the opening bars of that song showed that the punk rockers of Belfast, unlike some Tory politicians, have not forgotten their history and the impact of violence and fear on ordinary lives.

When I traveled from Galway to Belfast, I did not have to pass through any military checkpoints or explain my movements to soldiers with guns.

I loved the vibrancy of Belfast’s streets, the thriving restaurants and busy pubs, full of tourists soaking up the atmosphere in a way which would have been unthinkable a quarter of a century ago.

And I wished Jacob Rees-Mogg and other Brexiteers were there in the midst of 4,000 joyful punk rockers, fired-up on nostalgia but also so, so thankful for how far our little island has come.

The punks of Belfast, unlike Tory politicians, have a very strong appreciation for the benefits of compromise, knocking down border posts, and leaving the divisions and hatreds of the past behind.

Fans of Belfast’s most famous rockers can still remember how bad things were in the era of checkpoints, military patrols, and sectarian shootings, when crossing the city just to attend a concert was a logistical nightmare.

Now that they have found their "Alternative Ulster," they have no wish to go back to the dark days when too many young Northern Irish people really had wasted lives.

Belfast, once a ghost town after dark, is now a brilliant city for a late night on the town. Someone needs to remind Brexiteers like Rees-Mogg of that terrible past and just how far we have all come.

Ciaran Tierney is a journalist, blogger, and digital storyteller based in Galway, Ireland. http://ciarantierney.com/.