If there is a hard border installed in Northern Ireland, post-Brexit, do not expect the resultant violence to be confined to the border areas. 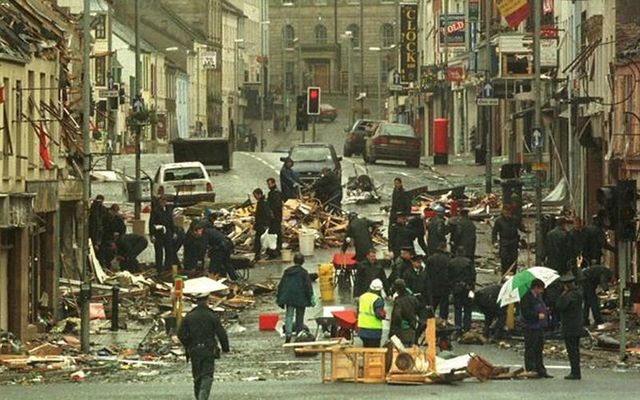 Aftermath of the Omagh bombings in County Tyrone, in 1998. BBC / YouTube

If there is a hard border installed in Northern Ireland, post-Brexit, do not expect the resultant violence to be confined to the border areas.

Dissident Irish Republican Army (IRA) groups have been thrown a lifeline by the Tory Party and we can expect recruits to line up to attack the day Northern borders are installed.

The incredible arrogance shown by the high Tories has resulted in a clear anger and utter mistrust all over Ireland of the intentions of the British in relation to a new United Kingdom and Republic of Ireland border. Violence will almost inevitably flare.

But don’t expect the violence to stop there. The Troubles Part Two will spread far and wide.

The Northern Ireland / Republic border as it is today.

We know that London would be a target. The Provisional IRA figured out that bombs in the British mainland were far more effective in forcing attention on the issue than shootings in North Ireland. Dissident IRA factions who are spoiling for a terror campaign will hardly overlook that plain reality.

Of course, violence in the  North of Ireland and Britain would be answered by Loyalist hardliners who thought nothing in the old days of attacking Dublin and other Irish Republic targets. There will be blood in both parts of Ireland if the hard border is re-imposed despite the wishes of the overwhelming majority of the population in Northern Ireland.

The situation is dire.

The Democratic Unionist Party (DUP) are currently holding the British government to ransom on the issue but even the moderate unionist parties oppose the hard border. Northern Ireland as a whole voted to remain in the Brexit referendum by 56 percent to 44 percent.

Such a border would also fly in the face of the Belfast Peace Agreement. Signed 20 years ago this is an international binding treaty that removed the physical border between Northern Ireland and the Republic. It was a document that represented a masterful exercise of diplomacy on all sides.

There are many who believe that this violent kind of scenario and tearing up the Belfast Agreement is way over dramatizing and that things will settle down.

No such luck. The Little Englanders around Theresa May are having none of it. They still believe they control an empire despite the fact that the last country they conquered were The Falklands Islands.

The ordinary British appear at last to be waking up to the threat and the devastation that will follow Brexit. Seven-hundred-thousand of them marched in London this weekend, calling for a new vote on Brexit or a new election.

Aerial footage shows 'hundreds of thousands' of people attending protest in London calling for a referendum on the final #Brexit deal https://t.co/zWgMYVnpr2 pic.twitter.com/xRCb3fLt6R

One hopes they are successful. The drumbeat from the right is for hard Brexit and hard Irish border. They are voices prophesying war.

To those who say it can't happen read “The Guns of August”,  a book about how countries stumbled into the horrific First World War, or consider how the Irish Troubles were sparked by a civil rights march that could easily have been allowed take place.

Do you believe that violence in the North and across the Republic and UK could flair if a hard border is Brexit's outcome for Ireland? Let us know in the comments section below or join the debate on social media.