US Ambassador to Ireland Edward Crawford says he has "enjoyed every minute" of his time in Ireland. 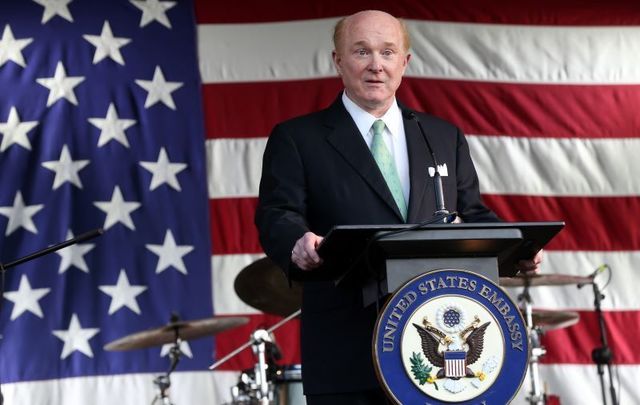 Edward Crawford, whose parents both hailed from Co Cork, served as US Ambassador to Ireland for nearly two years.

Edward Crawford said in a string of tweets on January 14 that he has "enjoyed every moment" of his time in Ireland as Ambassador.

My time in Ireland as U.S, Ambassador has come to an end, and I have enjoyed every moment of it. To all of the Irish people who graciously welcomed Mary and me, go raibh maith agaibh, thank you. pic.twitter.com/M7hLZGJlQO

He continued: "My first official visit as Ambassador was to my mother’s hometown of Boherbue, Co. Cork. Hundreds of you came out to welcome me, a day I will never forget.

"How proud my mother Catherine would have been to see her son 95 years after she left Ireland to return as U.S. Ambassador to Ireland, truly the American Dream."

While career politicians who come to serve as US Ambassadors typically remain in their roles for about three years before receiving a new assignment, it is customary for political appointees to tender their resignation when a new president takes office.

Crawford, who served as the finance chairman for the Republican National Committee’s Ohio campaign during the 2016 presidential campaign, was nominated to be the next US Ambassador to Ireland by President Trump in October 2018 and was confirmed by Congress in June 2019.

During his Senate confirmation, he said: “The United States and Ireland have worked together throughout our histories to resolve conflicts and promote peace and prosperity.

The Senate approved his nomination with a vote of  90-4. Among those who did not vote for Crawford were Elizabeth Warren and current Vice President-elect Kamala Harris.

Crawford officially began his duties in Ireland in July 2019. The position, which Kevin O'Malley resigned from in 2017, had been filled in the interim by Reece Smyth, the US Embassy's Charge d'Affaires.

During a Fourth of July celebration at the US Embassy in Dublin in 2019, Crawford told attendees: “I've dreamt about serving America and when I was approached about the potential of becoming an ambassador by someone you know the name of - this is before he was even elected - we talked about this because I had known him for some time.

"And he said, or his friend representing his conversation, but he was sitting there. And he said 'What country would you be interested in to become an ambassador? Would you do that? Would you take the time now?'

“He says, 'No, you have to give us three choices.'

Both of Crawford’s parents were Irish immigrants from Co Cork. His mother came through Ellis Island in 1925 and his father arrived two years later.

When Crawford was young, his family set out for California, but after their car broke down en route, they settled in Cleveland, Ohio. Crawford worked his way up to become a self-made billionaire as Chairman and CEO of Park Ohio Holdings Corp and The Crawford Group, both based in Cleveland, where he also founded the Irish Cultural Garden.

As President-elect Joe Biden, who regularly touts his Irish roots, continues to announce key nominations, including Irish American Mayor of Boston Marty Walsh and Dublin-born Samantha Power, there is no word yet on who will replace Crawford as US Ambassador to Ireland.

Former Senator Chris Dodd, a personal friend of Joe Biden, was initially thought to be the top pick for the role, but sources have since said that he has removed himself from consideration.