Joe Biden and Marty Walsh, both proud Irish Americans, spoke on Friday as Biden nominated Walsh as his Secretary of Labor. 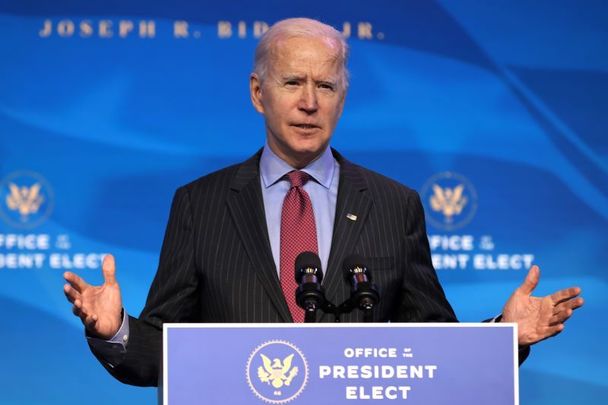 January 8, 2021: US President-elect Joe Biden delivers remarks before announcing members of his cabinet at The Queen Theater in Wilmington, Delaware. Getty Images

Joe Biden and Marty Walsh both made special mention of their shared Irish roots during Friday's briefing about the new nominations for the Biden-Harris Cabinet.

In nominating his "good friend and stand-up guy" Marty Walsh, President-elect Biden noted that Walsh is the son of Irish immigrants.

"The only downside, they're not from Mayo, they're from Galway," Biden said with a laugh.

Biden continued: “Marty was born and raised in Dorchester. I know him - tough as nails. Diagnosed with cancer at age seven, beat it at age 11. Joined the Laborers’ Union, 223, at age 21. Elected to the state legislature. Became union president and graduated from college at age 42.

“He’s now in his second term as a successful mayor of the iconic American city of Boston, who always puts working people first. Fighting for $15 minimum wage, paid family leave, providing frontline workers with emergency childcare and the protective equipment they need.

Speaking after Biden, Walsh remarked: “The word labor means everything to me.

Walsh recounted how he followed in his father’s footsteps into the Laborers Union where he learned the importance of jobs that provided security and dignity.

“Today, we’re at a crossroads in America,” Walsh continued. “Working people are holding the country together right now. I’ve seen up it close as mayor of the city that I love, Boston.”

He continued: “Working people have been struggling for a long time under the erosion of their rights and the deep inequalities of race, gender, and class. For the last four years, they’ve been under assault, attacks on their rights, their livelihoods, and the unions that built the middle class.

“We are facing hard times, but nobody is tougher than the American worker. And now, now we have the opportunity to put power back in the hands of the working people all across this country.”