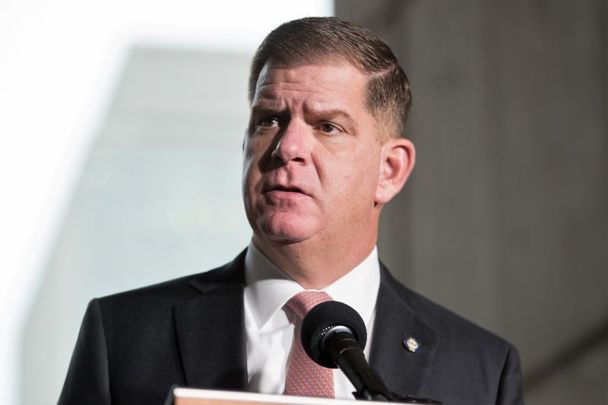 President-elect Joe Biden will nominate Mayor of Boston Marty Walsh as Labor Secretary, according to a report in Politico.

The Biden-Harris Presidential Transition Team has confirmed that Marty Walsh, the Mayor of Boston, has been nominated to serve as the Secretary of Labor.

A statement from the Transition team issued just before 8 pm EST on January 7 read: "Mayor Marty Walsh is nominated to serve as Secretary of Labor. If confirmed, Mayor Walsh would be the first union member to serve in this role in nearly half a century.

"Mayor Walsh has worked tirelessly to rebuild the middle class, create a more inclusive, resilient economy, and fight for workers in his hometown —  including fighting for a $15 minimum wage and paid family leave.

"During the COVID-19 pandemic, Mayor Walsh is working to support frontline workers, including funding emergency child care and other resources essential workers need to weather the pandemic.

"As the current Chairman of Climate Mayors, a group of 470 mayors nationwide, Mayor Walsh knows that we can create good-paying union jobs by investing in clean energy.

"Having served as the head of both Laborers’ Union Local 223 and the Boston Metropolitan District Building Trades Council, Mayor Walsh has the necessary experience, relationships, and the trust of the President-elect to help workers recover from this historic economic downturn and usher in a new era of worker power."

Tyler Pager, a White House correspondent for Politico, was the first to break the news on Thursday:

According to Politico, who noted Biden and Walsh's "strong personal ties," four sources have confirmed Biden’s nomination of Walsh.

However, at the time of publication on Thursday, neither Biden nor Walsh had publicly confirmed the nomination.

Should Walsh proceed with the position, Council President Kim Janey will become acting mayor of Boston.

The news comes less than two months after Walsh appeared to quash rumors that he would be the nominee. On November 11, he said in a statement: “While it’s an honor to be mentioned among the many highly-qualified individuals being considered for a role in the Biden Administration, I am focused on my job as mayor of the City of Boston.

“The last four years of President Trump’s failed leadership have hurt cities all across the country. On January 20, 2021, mayors will once again have a partner in the White House, and I’m excited about what a Biden-Harris administration means for Boston.”

Both Biden and Walsh are deeply proud of their Irish roots. President-elect Biden regularly touts his Irish connections and has reportedly floated the idea of Ireland being his first official foreign visit after he takes office.

Walsh’s parents are both from rural areas of Connemara in the west of Ireland. After heading for the US in the mid-1950s, the two met in Boston, married, and had two children.

Our house growing up was Irish and American. Boston's culture made it possible to be both. #ImmigrantHeritageMonth pic.twitter.com/nIWXAZaLUN

As a child, Marty battled cancer and was once given just a few weeks to live. Later, he was shot in a drive-by shooting, defeated alcoholism, and dropped out of college.

In 1988, 21-year-old Walsh joined the Laborers' Union Local 223 and served as the union's president until his election to the Mayoralty of Boston. He served in the Massachusetts House of Representatives, representing the 13th Suffolk district, between 1997 and 2013 before becoming Mayor.

In 2010, he was elected secretary-treasurer and general agent of the Boston Metropolitan District Building Trades Council, a union umbrella group.

The following year, Walsh was named head of the Boston Building Trades, but later resigned when he announced he was running for Mayor of Boston in 2013. He was sworn in for his first term in 2014, and his second term in 2018.

Also in 2018, Mayor Walsh became the first person to receive the Freedom of Galway Award in Ireland. At the time, he told IrishCentral: "The people I represent live in the city of Boston, but I also feel I represent the people of Connemara and I am proud of that."

Walsh was widely expected to run for a third term as Mayor of Boston this year.

On January 6, Mayor Walsh released a statement alongside the Boston City Council denouncing the riots at the US Capitol:

On Thursday, before reports of his apparent nomination emerged, Mayor Walsh joined a growing number of politicians who are calling for President Trump to be removed from office in the wake of the fatal US Capitol riots on January 6.

“I absolutely believe that the president should be removed from office,” Walsh said during his regular briefing at Faneuil Hall, calling on officials in Washington to start “a process right now, they should be moving forward [based] on what he did yesterday.”

Mayor Walsh is set to hold his State of the City Address on January 12.