Mayor Marty Walsh's office confirmed that Walsh is open to recommissioning the replica Emancipation Memorial after it was called into question by local artist Tory Bullock. 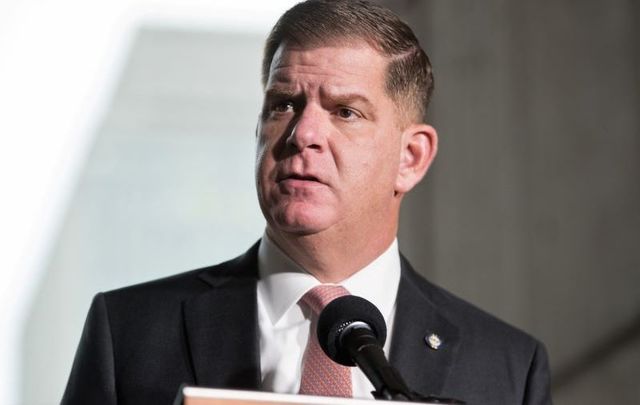 Mayor of Boston Marty Walsh is reportedly open to taking down or replacing the city’s replica Emancipation Statue that features President Abraham Lincoln after it was called into question by local black artist Tory Bullock.

In a nearly six-minute video shared on his Facebook page on June 11, Bullock explained why he thinks the Emancipation Memorial needs to be reconsidered and called upon Mayor Walsh to act:

Dear Boston, This statue needs to go. -Your Black Friend I'm going about this civically to see if Boston is as 'woke' as it's currently claiming to be. Sign the peition: https://www.ipetitions.com/petition/remove-the-emancipation-statue PLEASE DO NOT DONATE MONEY ON THE PETITION! I just need your signature #Boston #EmancipationMemorial #WhatAboutCrispus? #DesgraceOnPurpose

The statue in Boston's Park Square is a replica of the one that was first unveiled in Washington, DC in 1876. The original statue was funded by formerly enslaved people who wanted to “build an appropriate memorial to President Abraham Lincoln.”

The Boston Globe reports the replica statue was donated to the city of Boston in 1879 by Moses Kimball.

The Emancipation Memorial, also known as the Freedman's Memorial, shows a shirtless black man kneeling before President Lincoln. The inscription on the pedestal of the statue reads: “A race set free and the country at peace. Lincoln rests from his labors.”

“I’m trying to do things civilly,” Bullock says. “I suggest that the City of Boston … people like Mayor Walsh, if you’re watching this video right now, there’s going to be a petition attached and I just need you to take this [the statue] down.”

Bullock noted in his video that even Frederick Douglass, who spoke at the original monument's dedication, criticized the statue. John Cromwell, a Howard University historian, recorded that Douglass said during the dedication that the statue "showed the Negro on his knees when a more manly attitude would have been indicative of freedom."

Bullock, who wondered if there was any way to rework the state so that the black man was fully clothed and standing, went on to suggest a Boston monument to Crispus Attucks, who is considered to be the first person killed during the Boston Massacre, and thus the first American killed during the American Revolution.

A portrait of Crispus Attucks

Bullock insists that he does not want this statue or any other “racist iconography” to be destroyed, rather, he would like them placed in a sort of museum that he says, half-jokingly, could be called “crazy stuff that white people used to believe in.”

Bullock has since launched an online petition entitled “Dear Boston, This Has to Go - Your Black Friend” which as of Wednesday evening had just under 10,000 signatures.

On the petition, Bullock wrote: “DO NOT DONATE MONEY TO THIS CAUSE! I don't need money, just your signature!

“My name is Tory Bullock and I've been watching this man on his knees since I was a kid. It's supposed to represent freedom but instead represents us still beneath someone else. I would always ask myself, ‘If he's free why is he still on his knees?’ No kid should have to ask themselves that question anymore.

“If you feel the same then sign the petition! Please DO NOT DONATE MONEY TO THIS CAUSE! I don't need money, just your signature!”

The day after Bullock shared his video on Facebook, Mayor Marty Walsh, a proud Irish American who has been awarded the Freedom of Galway distinction, officially declared racism a “public health crisis” in Boston on June 12.

Mayor Walsh said during the press conference: “We’re not going to let this moment or this movement pass us by.

"I pledged to make Boston a national leader in this work and we are following through on our pledge.”

Mayor Walsh has yet to comment publicly on the statue, but according to The Boston Globe, his office has confirmed that the Mayor “is in favor of removing the statue and is willing to engage in a dialogue about its future in Boston.”

"The mayor is interested in potentially recommissioning the statue into one that recognizes equality," Walsh's office said according to The Boston Globe, "adding that since the statue is a memorial that falls under the Arts Commission, the administration is actively looking into what those processes would entail."

Later, in a public Facebook post on June 13, Bullock wrote: “Please stop pointing out to me that this is not a White Supremacy statue, I know this… I know that it was funded entirely by African Americans to celebrate the abolishment of slavery in the United States, I know the model in it is of a combo of people, I know it represents a moment in history that we must never forget.

“Knowing all of that vital information does not change the fact that it is tone deaf and needs to be taken down. Put it in a place where it can be pontificated about and debated under the right conditions and context.”

Please stop pointing out to me that this is not a White Supremacy statue, I know this… I know that it was funded...

Read More: Lincoln and the Irish, the untold story revealed