American abolitionist Frederick Douglass wrote how he was "captivated" after attending a speech made by Daniel O'Connell, 'The Liberator,' in Dublin in 1845. 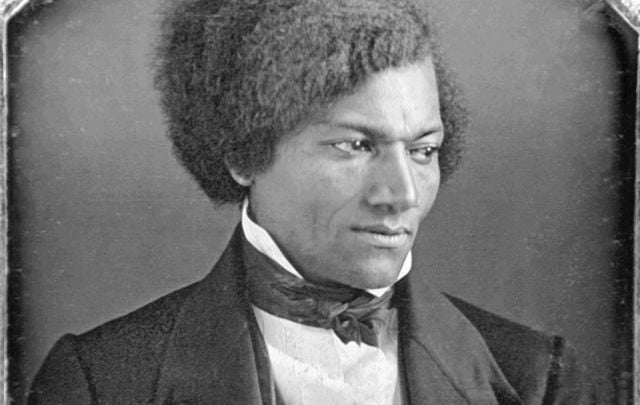 Frederick Douglass, pictured here in the 1840s, was "captivated" by Daniel O'Connell during his time in Ireland. Public Domain

Frederick Douglass, who had escaped slavery and later was at the forefront of the abolition movement in the US, was inspired by Irish nationalist Daniel O'Connell during a visit to Ireland in September 1845.

Douglass, the outstanding Black figure of the 19th century, was a target for every slave catcher and racist slave owner. It's no surprise that his book's release was explosive and created huge hostilities.

Douglass had developed an amazing influence, especially among anti-slavery advocates, and became the voice of his fellow slaves still trapped in the ungodly institution. His capture or death would have been a catastrophe for the anti-slavery campaign. No one else could bear such a powerful witness to the evils of slavery as Douglass.

To avoid physical harm, Douglass went abroad. His visit to Ireland transformed his grim mood as progress against slavery was slow in coming.

In his memoir "My Bondage and My Freedom: Part I – Life as a Slave, Part II – Life as a Freeman," Douglass wrote of Ireland:

Eleven days and a half gone and I have crossed three thousand miles of the perilous deep. Instead of a democratic government, I am under a monarchical government. Instead of the bright, blue sky of America, I am covered with the soft, grey fog of the Emerald Isle [Ireland]. I breathe, and lo! the chattel [slave] becomes a man. I gaze around in vain for one who will question my equal humanity, claim me as his slave, or offer me an insult. I employ a cab—I am seated beside white people—I reach the hotel—I enter the same door—I am shown into the same parlour—I dine at the same table—and no one is offended ... I find myself regarded and treated at every turn with the kindness and deference paid to white people. When I go to church, I am met by no upturned nose and scornful lip to tell me, 'We don't allow n****** in here!' 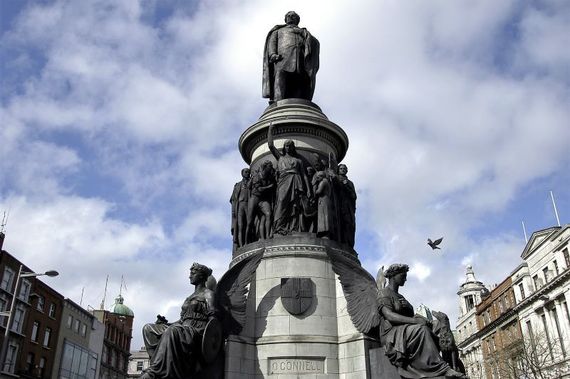 A statue of Daniel O'Connell in Dublin (RollingNews.ie)

In Ireland, Daniel O'Connell emerged as one of the most influential figures that Douglass would encounter. O'Connell was unique in being utterly against slavery - not a common position among political leaders at the time.

Douglass first encountered O'Connell when the Irish nationalist made a speech in Dublin on September 29, 1845. Days later, Douglass penned a letter to W.L. Garrison back in the US (which is included "Frederick Douglass and Ireland," edited by Christine Kinealy) which shows the impact O'Connell quickly had on him:

“I have but just returned from a great Repeal meeting, held at Conciliation Hall. It was a very large meeting—much larger than usual, I was told, on account of the presence of Mr. O’Connell, who has just returned from his residence at Derrynane, where he has been spending the summer, recruiting for an energetic agitation of repeal during the present autumn... The meeting had been in progress for some time before I got in.

"When I entered, one after another was announcing the Repeal rent for the week. The audience appeared to be in deep sympathy with the Repeal movement, and the announcement of every considerable contribution was followed by a hearty round of applause, and sometimes a vote of thanks was taken for the donors.

"At the close of this business, Mr. O’Connell rose and delivered a speech of about an hour and a quarter long. It was a great speech, skilfully delivered, powerful in its logic, majestic in its rhetoric, biting in its sarcasm, melting in its pathos, and burning in its rebukes.

"Upon the subject of slavery in general and American slavery in particular, Mr. O’Connell grew warm and energetic, defending his course on this subject. He said, with an earnestness which I shall never forget, “I have been assailed for attacking the American institution, as it is called,—Negro slavery. I am not ashamed of that attack. I do not shrink from it. I am the advocate of civil and religious liberty, all over the globe, and wherever tyranny exists, I am the foe of the tyrant; wherever oppression shows itself, I am the foe of the oppressor; wherever slavery rears its head, I am the enemy of the system, or the institution, call it by what name you will.

"I am the friend of liberty in every clime, class and color. My sympathy with distress is not confined within the narrow bounds of my own green island. No—it extends itself to every corner of the earth. My heart walks abroad, and wherever the miserable are to be succored, or the slave to be set free, there my spirit is at home, and I delight to dwell.”

"Mr. O’Connell was in his happiest mood while delivering this speech. The fire of freedom was burning in his mighty heart. He had but to open his mouth, to put us in possession of 'thoughts that breathe, and words that burn.'

"I have heard many speakers within the last four years—speakers of the first order; but I confess, I have never heard one, by whom I was more completely captivated than by Mr. O’Connell.

"I used to wonder how such monster meetings as those of Repeal could be held peaceably. It is now no matter of astonishment at all. It seems to me that the voice of O’Connell is enough to calm the most violent passion, even though it were already manifesting itself in a mob. There is a sweet persuasiveness in it, beyond any voice I ever heard. His power over an audience is perfect.

"When he had taken his seat, a number withdrew from the Hall, and, taking advantage of the space left vacant thereby, I got quite near the platform, for no higher object than that of obtaining a favorable view of the Liberator. But almost as soon as I did so, friend Buffum had by some means (I know not what) obtained an introduction to Mr. John O’Connell, and nothing would do but I must be introduced also—an honor for which I was quite unprepared, and one from which I naturally shrunk.

"But Buffum; in real Yankee style, had resolved (to use a Yankee term) to “put me through” at all hazards. On being introduced to Mr. O’Connell, an opportunity was afforded me to speak; and although I scarce knew what to say, I managed to say something, which was quite well received.

"The Hutchinson family have been here a week or more, and have attended two of my lectures on slavery; and here, as at home, did much by their soul-stirring songs to render the meetings interesting.

"My Narrative is just published, and I have sold one hundred copies in this city. Our work goes on nobly. James and myself leave here for Wexford on Monday next. We shall probably hold two meetings there, and from thence go to Waterford, and then to Cork, where we shall spend a week or ten days. I have also engagements in Belfast, which will detain me in Ireland all of one month longer.