Winston Churchill is either revered or loathed, but it always important to consider his history in Ireland during such discussions. 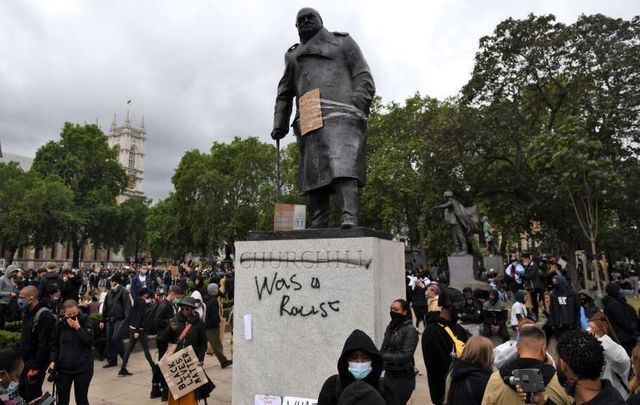 A statue of Winston Churchill in London was defaced during a Black Lives Matter protest on June 7, 2020. Getty Images

Winston Churchill is divisive; he's either revered or loathed.

As monuments to “problematic” historic figures in the US have come under heightened scrutiny, so too has former UK Prime Minister Winston Churchill and his memorial statue in London.

On June 7, the statue of the wartime Prime Minister located outside of the Houses of Parliament was spray painted to read “Churchill was a racist.” The statute has since been cleaned and boarded up to protect it during further protests

Churchill has always been a divisive figure - revered by some, loathed by others - but it’s important to remember Ireland while his legacy is again reconsidered.

As early as 1904, Churchill said: “I remain of the opinion that a separate parliament for Ireland would be dangerous and impractical.” He always envisioned an Ireland as part of the British Empire.

Churchill and the British war cabinet were completely unable to come to terms with the rise of Irish republicanism in the wake of the 1916 Easter Rising. Indeed, they put the War of Independence down to thugs and fanatics. They learned nothing from the 1918 election which saw Sinn Fein win 73 percent of the vote in the 32-county election.

The British government was also filled with unionist sympathizers, Churchill among them, who had stood idly by while Unionists armed themselves and carried out pogroms. Their attention was completely on the aftermath of the Great War, and Ireland was an utter nuisance.

In March 1920, as the British Secretary of State for War, Churchill ordered what became known as the Black and Tans into Ireland as a desperate attempt to defeat the Irish rebellion. It was a fatal mistake by the British that drove Irish opposition to British rule to new heights.

The Black and Tans were a force of temporary constables recruited to assist the Royal Irish Constabulary (RIC) in maintaining control over the Irish Republican Army (IRA) during the Irish War of Independence.

The attitude of the Black and Tans is summed up well in the (sometimes disputed) account of Lt. Colonel Gerald Smyth, a fierce unionist, who said in an address to recruits in Listowel, Co Kerry in June 1920: “...when civilians are seen approaching, shout ‘hands up.’ Should the order not be immediately obeyed, shoot and shoot with effect.

“If the persons approaching a patrol carry their hands in their pockets, or are in any way suspicious looking, shoot them down.

“You may make mistakes occasionally and innocent persons may be shot, but that cannot be helped, and you are bound to get the right parties some time.

"The more you shoot, the better I will like you, and I assure you no policeman will get into trouble for shooting any man.”

He added: “...Hunger strikers will be allowed to die in jail, the more the merrier. Some of them have died already, and a damn bad job they were not all allowed to die.”

He further reportedly said: “As a matter of fact, some of them have already been dealt with in a manner their friends will never hear about. An emigrant ship left an Irish port for a foreign port lately with lots of Sinn Feiners on board, I assure you, men, it will never land.

“That is nearly all I have to say to you. We want your assistance in carrying out this scheme and wiping out Sinn Fein.”

One Sligo-born recruit, Constable Jeremiah Mee, afterward addressed Smyth saying: “By your accent, I take it you are an Englishman and, in your ignorance, forget that you are addressing Irishmen.”

He then removed his cap, belt, bayonet, and gun, laid them on a table, and continued, “these too are English, take them as a present from me and to hell with you, you are a murderer.”

Smyth ordered his arrest but many of the other constables presentwarned that "the room would run red with blood" if Mee was touched. Thirteen resigned on the spot. The affair became known as the “Listowel Mutiny.”

Mee exited the Black and Tans and returned to his native Sligo where he went on to work closely with Michael Collins, who, in turn, later worked closely with Churchill himself for the Treaty that was agreed upon in 1921.

As for Smyth, his comments quickly circulated and marked him for attention from the IRA. He subsequently returned to Cork and took lodgings at the Cork & County Club, an Anglo-Irish social club. On the evening of 17 July 1920, he was in the smoking-room when a six-man IRA team led by Dan "Sandow" O'Donovan entered and allegedly said to him, "Colonel, were not your orders to shoot on sight? Well, you are in sight now, so prepare." He was shot several times and died, aged 34.

The following month, Churchill ordered aerial bombings in Ireland to target Sinn Fein. He said on July 1, 1920: “I see no objection from a military point of view, and subject of course to the discretion of the Irish (Free State) government and of the authorities on the spot, to airplanes being dispatched with definite orders in each particular case to disperse them by machine-gun fire or bombs, using of course no more force than is necessary to scatter and stampede them.”