Eight hundred and seventy-four days after Donald Trump took office as president, the United States has a new Ambassador to Ireland. 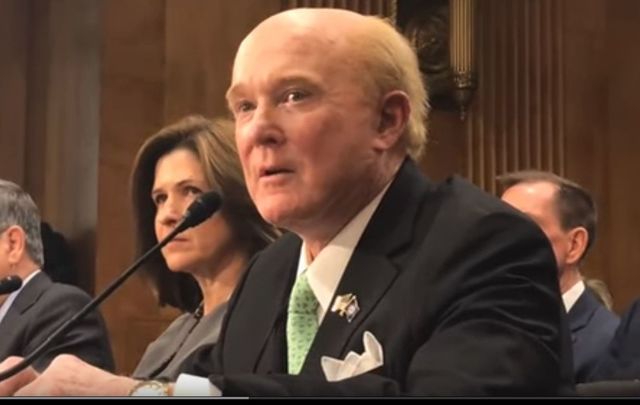 Ohio businessman Ed Crawford, the next US ambassador to Ireland, testifying before the US Senate. YouTube

Eight hundred and seventy-four days after Donald Trump took office as president, the United States has a new Ambassador to Ireland.

Official roll-call vote on confirmation of Ed Crawford as next US ambassador to Ireland. Four voted against. Surprise that NY Democrat Kirsten Gillibrand voted against in previous vote but not present for confirmation vote pic.twitter.com/ef5rdJMWmD

President Trump announced Crawford as his pick for Ambassador to Ireland in October 2018. The role has been vacant since 2017 when Kevin O’Malley, who served under President Barack Obama, resigned. The position has been filled in the interim by Reece Smyth, the US Embassy's Charge d'Affaires.

Trump’s initial choice for the role, Florida businessman Brian Burns, was forced to withdraw from the position due to ill health.

“I am delighted that Ed Crawford has been confirmed by the Senate today to be the next US ambassador to Ireland. Ambassador Crawford has long been a prominent and highly-regarded member of the Irish community in Cleveland,”  Dan Mulhall, Ireland’s Ambassador to the US, said in a statement.

Read More: Trump's new ambassador to Ireland criticized him on his remarks about Mexicans

"I know that he wants to focus on developing further the already deep two-way economic links between Ireland and the USA, an aim I fully share. I wish him the very best as he embarks on this exciting new chapter as Ambassador to Ireland.”

Crawford, who served as the finance chairman for the Republican National Committee’s Ohio campaign during the 2016 presidential campaign, was an early supporter of Trump’s bid for the US Presidency. Both of his parents hail from Co. Cork in Ireland.

The U.S. Senate votes 90-4 to confirm Cuyahoga County businessman Ed Crawford as the new U.S. Ambassador to Ireland filling the post that's been open for three years. @senrobportman and @SenSherrodBrown on what it means to Ohio. @wews #wews pic.twitter.com/wNv0YJCj5E

When Crawford testified before the Senate in April, he highlighted the strong bonds between Ireland and the US and said that he would work to help maintain peace in Northern Ireland.

Crawford is the founder of Park-Ohio Holdings which operates more than 125 manufacturing sites and supply-chain facilities around the world, including in Ireland. The company employs 7,500 people.

Following his nomination in October, Crawford stepped down as chief executive of the company; his son Matthew has since assumed the role.