Ed Crawford stated he hoped Donald Trump would grow up and change after the remarks. Crawford also played a huge role in delivering Ohio to Trump. 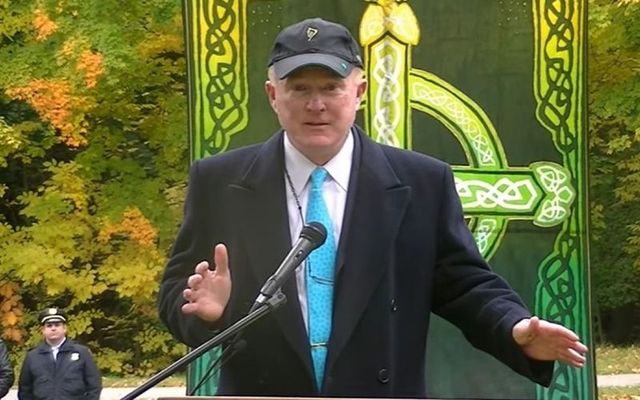 Ohio businessman Ed Crawford, who has emerged as the front-runner to become the next US ambassador to Ireland, at the opening of an Irish Cultural Garden in Cleveland. YouTube

Ed Crawford was key in Trump's victory in Ohio.

New US Ambassador-designate to Ireland, Ed Crawford, was once strongly critical of Donald Trump after he made comments attacking the Mexican ethnicity of a judge dealing with the claims that Trump University was a fraud. In 2017, U.S. District Judge Gonzalo Curiel ordered Trump University to pay $25 million to former students.

When asked in June 2016 by the Cincinnati Enquirer about Trump's Mexican heritage comment, originally made in May 2016, Crawford said: "When some people grow up, they change. And we'll find out if he is able to (become a centrist candidate). He's got ability, and he's been a winner.

"As individuals get more comfortable with the nominee – which I think will happen – I consider him moving toward almost a centrist campaign."

Crawford made those comments during the 2016 campaign but far from moving to the center, Trump has continued to make inflammatory racial comments and encourage the hard right.

Crawford, who is the CEO of Park Ohio holding, an industrial supply chain business which had $1.3 billion in revenue in 2016, decided to back Trump at a crucial time after the Republican presidential primary held in March 2016 when local Governor John Kasich easily defeated Trump by an eleven-point margin.

Kasich and his moderate brand of GOP politics were far removed from Trump’s right-wing stance. The Ohio governor and his backers made clear they would not support Trump, even if he became the nominee.

The split in the Ohio Republican Party threatened to have major repercussions as it was viewed as a must-win state by the Trump campaign.

It was then that Crawford stepped forward, even though he had been a Kasich delegate at the Republican convention.

Crawford put together a group that was sufficiently influential to essentially take over the Ohio state party.

Great news as former @MayoSocietyCLE Person of the Year, Ed Crawford, looks set to become US Ambassador to Ireland.

He was named Trump’s fundraising chair and held a major fundraiser for the future president at his home.

Crawford also stated that Kasich’s reluctance to support Trump could have caused a loss to Clinton in Ohio: "We saw a key void in the top echelon of the Republican Party as far as elected officials go and their willingness to back Donald Trump."

Reince Priebus, the head of the Republican National Committee, warmly welcomed Crawford in his new role. "I'm proud to have Eddie agree to be our state director, to help us raise the funds that we need," Priebus said of Crawford.

"I can't tell you how grateful I am for the relationship we've built over the last several years. He's always been a team player, a great Republican and a supporter of our party."

Crawford was asked if Kasich sitting on the sidelines was going to be a problem for raising funds.

"John Kasich has been an excellent governor - and still is a governor," Crawford added when asked to elaborate. "He has his right to make his own decisions. And when he decides what he's going to do, he'll let us know. Right now that will not get in our way.

"In fact, quite frankly, it puts extra energy into ... this thing. Don't think for a second people are just overwhelmed by the fact that someone is not going to play on our team. It's like losing a pitcher. That's OK. If we lose the pitcher, we'll get someone else in there. We're not worried about that, OK? We're going to get the players, and if he wants to come back and play with us, we need him, I hope he'll be here. But if he's not, we'll do it ourselves."

Priebus then stepped to the microphone.

"I agree with Eddie," he said. "I think the governor has to make his own decision. We're not going to sit here and act as though this was not a rough primary. It was."

This was Crawford how cast the election as a chance to elect a "positive leader."

In a subsequent interview with the Cincinnati Enquirer Crawford said it "wasn't tough at all" to get behind Trump's candidacy.

Now he is being rewarded with the role of US Ambassador to Ireland.

What do you make of Crawford? Will he make a good ambassador to Ireland? Let us know your thoughts in the comments section, below.