Irish politician claims that the cancellation proves that Ireland’s relationship with the US is "not functioning." 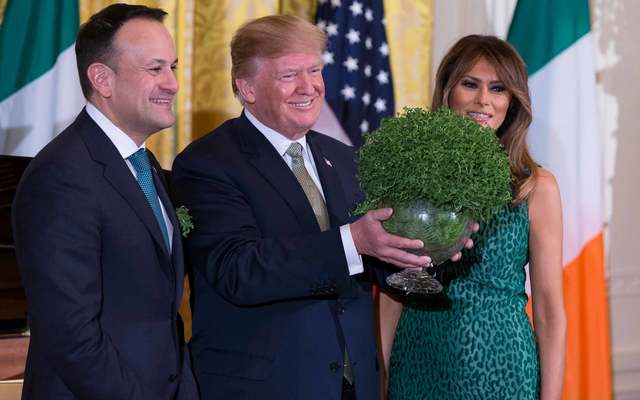 Fianna Fáil leader Mícheál Martin states that the Irish government must bring pressure for a US ambassador to Ireland, in order to reboot US-Irish relations.

Confusion was rife over what was the official line once again in the White House on Tuesday as the news emerged that President Donald Trump may no longer be stopping off in Ireland as part of a European trip. The venture to Europe as a whole is now believed to be under review.

With the Irish government appearing to confirm that Trump’s stopover had been postponed and the White House stating that nothing was definite, effective communication between the countries looked to be at a low, resulting in the leader of Irish political party Fianna Fáil claiming that the relationship between the two is currently “not functioning.”

An official statement on this is coming shortly I believe, but for now, we have it from a few sources that the visit by @POTUS to Ireland will not go ahead. #TrumpinIreland Read more here - https://t.co/P6BOxkg5ym

"I think it’s time to try and get this relationship sorted,” said Mícheál Martin, referring, in particular, to the lack of a US Ambassador to Ireland, who would have worked in establishing a visit with the Irish government before the current talked-about trip hit them “out of the blue.”

"It was a bolt out of the blue. Then suddenly, in a similar manner it emerged that the visit is off,” he admitted.

"I think the Government should put a bit of pressure on to get an ambassador at least identified.”

Martin, who has previously held the title of Irish Minister Foreign Affairs, added that while it may be symbolic of the way in which President Trump makes a decision, he had never seen a State leader suddenly announce and then cancel a trip to a foreign state in such a manner.

"I’ve never seen anything like this, genuinely,” Martin said.

"This is reflective of a relationship that is now not functioning, that needs to get sorted and needs structures in place."

President Trump was planning to visit Dublin and County Clare as part of a larger European tour. His trip to Ireland was to be carried out on his return leg, as he returned from Armistice Day commemorations, in France on Nov 11.

On Tuesday, the Irish government announced that Trump's trip has been postponed:

“We can confirm that the proposed visit of the US President is postponed. The US side has cited scheduling reasons."

"We are still finalizing whether Ireland will be a stop on that trip."

According to White House Press Secretary Sarah Huckabee Sanders, however, the trip is now being reassessed and while Ireland cannot be confirmed, it has not been completely ruled out:

Now confirmed. Statement by #SarahHuckabeeSanders on #Trump visit to Ireland: “The President will travel to Paris in November as previously announced. We are still finalizing whether Ireland will be a stop on that trip. As details are confirmed we will let you know.”

It is likely that the news will come as a relief to the Irish government. Upon hearing of President Trump's planned visit, Ireland's Taoiseach (Prime Minister) Leo Varadkar admitted the offer of a visit came out of the blue and poses significant problems for the Irish government.

Varadkar pointed out that the results of the Irish presidential election are due out on November 11 and Ireland had also planned to be present at the ceremonies for the 100th anniversary of the First World War, given the number of Irish who died fighting for the British Army.

At the time Varadkar has also said he was aware of the Anti-Trump sentiment on the ground in Ireland. In fact, already two independent ministerial politicians had said they would protest Trump's planned visit while the public in every main city in Ireland planned public demonstrations.

IrishCentral's own readers were asked in a poll if Donald Trump should visit Ireland and a whopping 70% of our readers voted that he should not. That's more than two in three.

Do you believe that Trump’s cancellation is a sign of crumbling relations between Ireland and the US? Is a US Ambassador to Ireland needed? Let us know your thoughts in the comments section, below.