Danny Dromm once protested the NYC St. Patrick’s Day Parade from the sidelines because Irish gay groups were banned from marching, and now he’s happily part of the parade’s leadership as chief financial officer 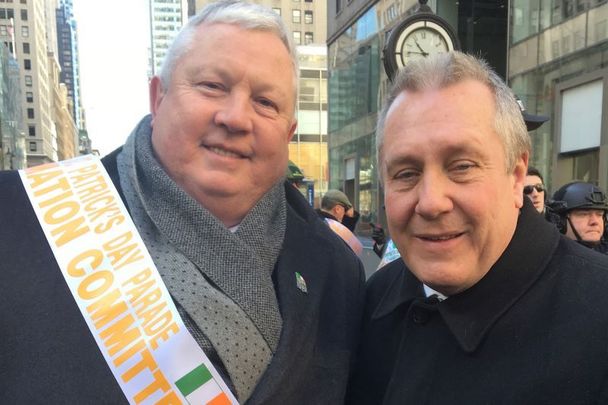 Attending the New York City St. Patrick’s Day parade on Fifth Avenue was a cherished annual ritual for Danny Dromm and his family during his childhood. But in adulthood Dromm, the recently retired New York City Council member from Queens, protested the exclusion of Irish gay groups from the march until the Lavender and Green Alliance was finally given the green light to take part in 2016.

Now, Dromm is “part of the establishment,” he laughs, thanks to his unanimous election last week as chief financial officer of the parade. His elevation came during a meeting of the parade’s board of directors which also unanimously re-elected chairman Sean Lane, vice chair Ryan Hanlon, chief administrative officer Hilary Beirne and president Tommy Smyth to new four-year terms.

“It’s actually overwhelming. I have always loved the parade and I wish that my mother was still here so that she could see all the change for herself. She’d be so proud. My affinity for everything Irish comes from her.”

Mary Audrey Gallagher passed in January of 2018. Her Irish roots were in counties Galway and Leitrim, and she was a die-hard Irish American who took her children out of school every St. Patrick’s Day so they could attend the parade.

Her father was a lieutenant in the NYPD, and her brother a sergeant. Both worked out of the 108th Precinct in Long Island City, and St. Patrick’s Day was always one to circle on the calendar for the family.

“Even my father, who was German and Swedish, loved the Irish. He played the Clancy Brothers all the time. My mother would sing the old Irish songs for St. Patrick’s events in Jackson Heights. Her favorite was ‘Paddy McGinty’s Goat,’” Dromm recalled.

As a child, he never marched on Fifth Avenue but watched the festivities from the sidewalk as his grandfather, a member of the Ancient Order of Hibernians, and other family members took part.

Little did Dromm know back then that he would eventually assume a leading role in the fight for equality for Irish gay groups not only on Fifth Avenue but in other local marches as well.

Dromm was “heartbroken” by the gay group ban instituted by former Fifth Avenue parade leaders who declared that the march was primarily a Catholic one. He was never arrested during the many protests in the 1990s and early 2000s for good reason – for 25 years, until 2009, he was employed as a teacher in the New York City public school system.

“I was usually working on March 17 because we didn’t have St. Patrick’s Day off,” Dromm remembers. “I was very close with Chris Quinn and Tom Duane (former members of the City Council) who were arrested. And I protested on Fifth Avenue when the parade was on a Saturday, but if I got arrested I would have had to report it to the Department of Education.

“I remember on those days cops shouting, ‘Those who want to get arrested stay on the street. Those who don’t, move to the curb.’ It’s a special kind of activism and dedication for those who went through that.”

Given the cold shoulder on Fifth Avenue, Dromm worked with Co. Louth native and LGBT activist Brendan Fay to make sure Irish gays were able to openly celebrate back in 2000 with the creation of the St. Pat’s for All march in Sunnyside and Woodside. Dromm founded the Queens Pride parade in Jackson Heights in 1993, so his insight was invaluable.

“And now St. Pat’s for All is going to turn 24 years old. And it’s better than ever,” Dromm says.

But the Irish takeover of Fifth Avenue every March 17, Dromm says, is incomparable. When Fay’s Lavender and Green Alliance was given a place in the march in 2016, Dromm remembers being “overcome” during the announcement at the Irish Consulate attended by then New York City Mayor Bill de Blasio, whose office helped broker a deal.

“I saw Tarlach MacNiallais weep, and then I started,” remembered Dromm. MacNiallais, a native of Belfast, was another long-time LGBT activist who eventually became a member of the formation committee for the Fifth Avenue parade, and retained the position until his death from Covid-19 in 2020 at the age of 57.

“I never thought I would know or even have anything to do with the parade leadership. I never figured it was possible. But the parade has always been so special to me, every aspect of it. Hearing those bagpipes on Fifth Avenue, seeing all the marching bands. It’s such a point of pride for us Irish,” Dromm says.

“It’s just a real honor that the parade leadership has shown such trust and confidence in me. I’m most grateful for that.”

Chairman Lane says Dromm’s selection as chief financial officer, with a seat on the board, was an easy one. Dromm, after all, served as the New York City Council’s finance chair for four years, helping to oversee a budget of $100 billion. He was first elected to represent District 25 on the City Council in 2009 and served three terms before term limits forced his retirement at the end of 2021. He was also the founder of the council’s Irish caucus.

“Danny is so involved in the local Irish community and is respected by everyone. He’s been on the parade’s scholarship committee for a few years and we feel very fortunate that he’s accepted the role of chief financial officer. He’s a great leader and we’re looking forward to working with him to keep the parade going strong,” Lane told the Irish Voice.

Dromm is technically retired, but not really. He’s a member of the board of the Emerald Isle Immigration Center, heads the retired teacher’s chapter of the United Federation of Teachers, and still runs the Queens Pride march in Jackson Heights. He takes a welcome breath when he retreats to his getaway home upstate.

“I’m very fortunate to still be busy, but I plan on staying away from politics,” he laughs. “I think I did my part for the people of my community. And as finance chair, one of my goals was to help fund worthy Irish organizations like the Emerald Isle because our institutions are so important.

“My last very last funding grant,” he notes, “was for Sober St. Patrick’s Day. I am 31 years sober, and the work they do to celebrate the holiday without alcohol is so important. I’m looking forward to many terrific parades in the future for us all.”