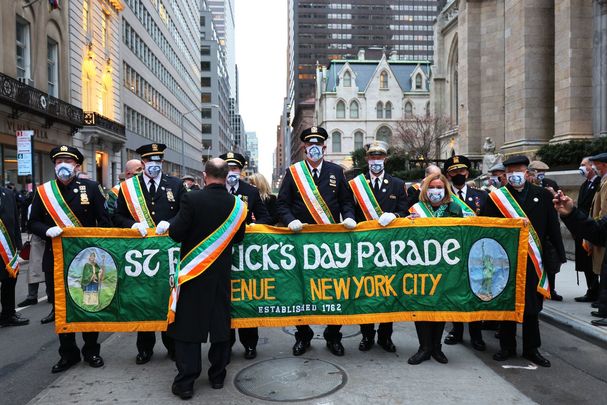 March 17, 2021: Parade marshals hold a banner after a short parade before the start of a St. Patrick's Day Mass at St. Patrick's Cathedral in Manhattan in New York City. The traditional St. Patrick's Day festivities in NYC were cancelled due to the coronavirus (COVID-19) pandemic. Getty Images

In a conciliatory move, the NYC St. Patrick's Day Parade Committee has elected an LGBT advocate, Danny Dromm, a former City Council member in New York, to its board as Chief Financial Officer.

Dromm’s election puts the seal on a greatly improved relationship between the NYC St. Patrick's Day Parade Committee and the Irish LGBT community.

It is a remarkable shift given the fierce animosity in the past which had led to confrontations on Fifth Avenue and claims of discrimination.

However since the top board membership changed, confrontation has turned to conciliation, first inviting a gay Irish group to march and now electing a key member of the LGBT community to the board.

Happy St. Patty's Day! I am so proud that LGBTQ+ groups are able to celebrate & march in the NYC St. Patrick’s Day Parade for what would've been the sixth year had the pandemic not happened. Thanks to the organizers for inviting me to participate in the smaller march this morning pic.twitter.com/4nRGmwLncr

Dromm has been a progressive leader in Queens for over 20 years. Dromm was elected to the New York City Council in 2009 and represents District 25 (Jackson Heights & Elmhurst). He served as the Chairperson of the Finance Committee.

In the City Council, Dromm was a tireless advocate with a proven record of delivering for the community including:

- $4 million to Elmhurst Hospital to create a Cardiac Care Unit and expand the Emergency Room.

- More than $860 million to build new schools for the community and fight overcrowding.

- Led the effort to enact Local Law 6, certifying that all undocumented immigrants in City foster care get put on a path to citizenship.

- Passed Paid Sick Leave’ defending workers from unfair employers and protecting consumers from the spread of contagious illness. the effort to end corruption and bring transparency to the Rikers Island jail complex.

Prior to his election, Dromm was an award-winning New York City public school teacher at PS 199Q in Queens, from 1984 to 2009.

Dromm is a pioneer of the LGBT rights movement in Queens and organized the first Queens LGBT Pride Parade and Festival. A fluent Spanish speaker, Dromm graduated from Marist College and earned his master’s degree at City College. He lives in Jackson Heights.