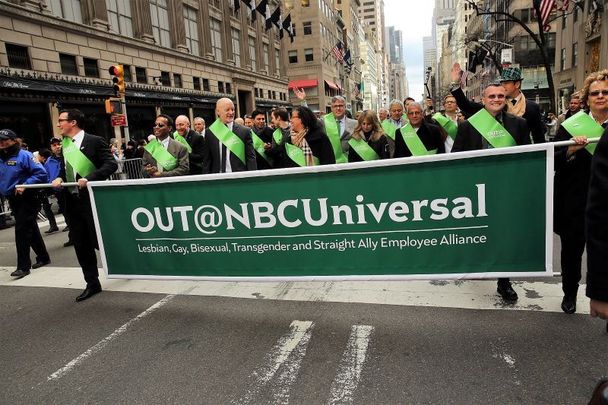 St. Patrick’s Day parade history in New York City was made at exactly 3:54 p.m. on Tuesday, March 17, when over 100 marchers from OUT@NBCUniversal stepped onto Fifth Avenue behind their own identifying banner – the first LGBT group ever to take part in the parade.

Included behind OUT’s green banner, which also contained the words “lesbian, gay, bisexual, transgender and straight,” were many top-level NBC executives, including Ron Meyer, the vice chairman of NBC Universal based in Los Angeles who flew in to show his support for the marchers, and Francis X. Comerford, the chief revenue officer for NBC and the grand marshal of the parade in 2012.

The reception when the OUT group stepped onto Fifth Avenue was one of joy, as the marchers raised their hands in glory and were greeted with cheers by the onlookers still left on Fifth Avenue.

There was a huge media presence from around the world lined up on West 48th Street with the OUT group before they stepped off, one of the last groups to march which is standard for new admissions to the parade. The marchers were dressed in suits and business attire wearing green NBC sashes, and were clearly delighted with the chance to make history – and forge a path forward for additional LGBT inclusion in the future.

“Some group had to be first, and it was us,” Thomas Roberts, the MSNBC anchor who was clad in green in plaid, told the Irish Voice.

“I’m really proud and really happy. We all are.”

When asked about the controversy about the exclusion of Irish gay groups from the march, Roberts expressed hope that OUT’s inclusion would be the start of something new.

“This is not perfection, but it’s a start and that’s very important. It’s progress, and we’re just so happy and proud to be included. It’s a great day for all Irish.”

Comerford, who also serves as an official on the New York City St. Patrick’s Day parade committee, was instrumental in brokering the compromise that brought OUT into the line of march last fall – a story first reported by the Irish Voice in September.

He first marched with parade officials earlier on Tuesday, then returned to West 48th Street to join his NBC colleagues in a show of support.

When asked about Irish gay groups continuing to protest the parade after the announcement of OUT’s inclusion in the line of march, Comerford said that he remained hopeful of further inclusiveness on Fifth Avenue in the years to come.

He also expressed solidarity with members of the parade committee who remain opposed to LGBT inclusion in the march.

“Change is difficult, no doubt,” he said. “But you know, we’re all working together, and we all love the parade.”

“This is amazing, truly amazing. I’m really proud and happy,” he told the Irish Voice.

Many of the hundreds of thousands who lined Fifth Avenue on Tuesday morning to watch the parade under skies that were cloudy but eventually turned sunny were gone by the time OUT stepped off, but those who remained were supportive, showering the marchers with cheers and pumped fists. The Irish Voice walked with OUT until 59th Street, and the marchers behind the group’s were ecstatic with the reception.

Absent by the time OUT arrived on Fifth Avenue were the Irish LBGT protesters who were positioned in their usual spot on the sidewalk at 56th Street. The protestors have been highly critical of OUT’s acceptance of a spot in the line of march. “Get off our shoulders and say it to our faces! Don't dare say you support‪#LGBT movt,” the Irish Queers group tweeted to OUT on March 16.

The OUT marchers walked past St. Patrick’s Cathedral and waved to those who were outside. They were warmly received, but not officially greeted by any church officials.

Cardinal Timothy Dolan was the grand marshal of this year’s parade and received an enthusiastic welcome on Fifth Avenue. His acceptance of the grand marshal honor this year also conveyed his support for the inclusion of OUT in the line of march.

“You know, I support OUT so much. Who cares who you have sex with? We’re all equal so good luck to them. I’m glad they’re here on Fifth Avenue,” parade-goer Bryan Fitzgerald told the Irish Voice after shouting his support to the OUT marchers.

“It’s a great day for the parade, and OUT has made it that much better.”