"We have come a long way," Irish LGBT group The Lavender and Green Alliance founder Brendan Fay said at the Queens Pride Parade, "There is more to go." 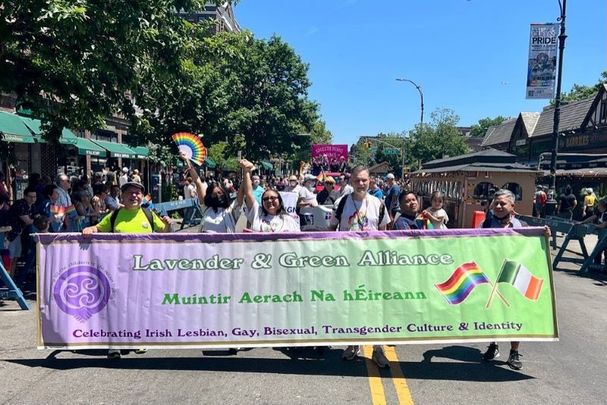 The Lavender and Green Alliance was among the many groups taking part in the Sunday, June 5 Queens Pride parade, which returned to Jackson Heights after a three-year absence. The parade was founded by former New York City Council Member Danny Dromm 30 years ago.

“We are proud to be marching for this 30th-anniversary parade and festival. We carry the Irish Tricolor flag stitched by movement pioneer Gilbert Baker. As we celebrate the equality we have achieved here and back home in Ireland we are determined to be visible in creating a community of hope for a new generation,” Lavender and Green Alliance founder Brendan Fay said.

“As conservative forces seek to roll back marriage equality, transgender rights, and immigration, we continue to rise together, speaking up for dignity and human rights.”

Fay said that his group’s Irish banner was well received along the marching route.
“People know the journey for change, whether personally or as a nation like Ireland. We can and continue to overcome! Together we rise and together we find a force of power for good and social change.

“Politicians came out with words and promises and for votes. They are aware of the power of the LGBT vote in New York.

"I had conversations about sickle cell care and our legislation on nuclear divestment and disarmament. We have come a long way. There is more to go. Today we celebrated, hugged and cheered. We had conversations, felt energized, connected. We exchanged ideas, hopes and strategies, selfies and cell numbers. Tomorrow back to joyful rising together, advocacy and moving forward.”